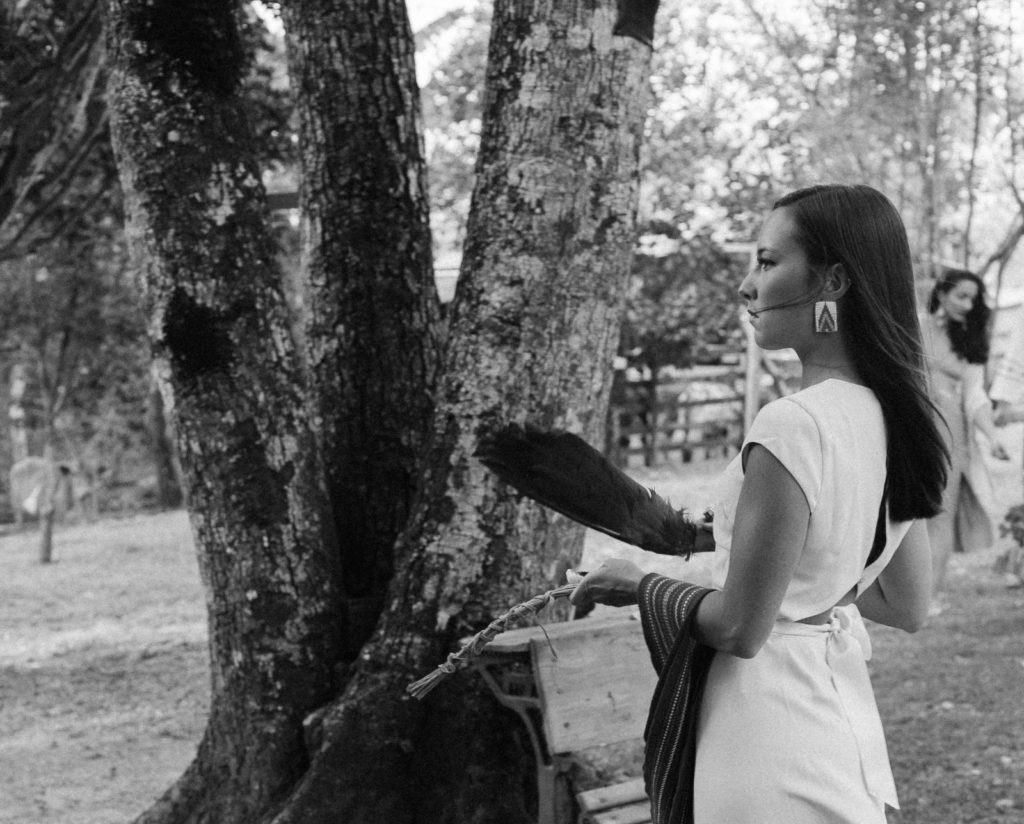 As she entered the press room on Parliament Hill, Emilee Gilpin was struck by the paintings on the wall. It was 2018, and the young journalist had been tasked with writing a piece on Prime Minister Justin Trudeau’s exoneration of six Tsilhqot’in chiefs who had been hanged by colonial authorities in 1864.

The historic event had brought members of the Tsilhqot’in Nation from British Columbia to the House of Commons — but for many attendees, the atmosphere was far from welcoming.

“Some of those elders at the time shared that [the] experience of walking through Parliament reminded them of a residential school — like the same kind of energy,” says Gilpin.

For Gilpin, those feelings were reflected as she stepped into the press lounge. Pictures of Canadian journalism’s founding fathers lined the wall, serving as glaring reminders of how media functions in the country.

The experience was just one of many that reminded Gilpin of the serious need to repair Canadian journalism. Three years later, Gilpin is at the forefront of efforts to decolonize the media, as the managing editor of IndigiNews, a digital outlet that serves Indigenous communities on Vancouver Island and in the Okanagan Valley.

Launched last spring, IndigiNews is staffed by a team of mostly women and gender non-conforming journalists of mixed Indigenous ancestry. Gilpin says the newsroom is completely different from the spaces she’s worked in, as a former reporter at Canada’s National Observer and as a former intern with The Tyee.

“This last year has been really hard for everyone,” says Gilpin. “It’s really necessary to have relationships and spaces that are safe and you feel like you can be honest, and what sets us apart is that everybody just cares, that everyone has a big heart.”

It’s been a turbulent year indeed — and not just for journalists, but for Canadian journalism as a whole. Amid a summer of protests against anti-Black racism, newsrooms across the country have been forced to reckon with inequity and the lack of diversity in the media industry. On top of this, shrinking advertising revenue and the domination of Facebook and Google have dealt heavy — and often fatal — blows to news outlets relying on ad-driven business models.

But in spite of the pandemic’s acceleration of media closures and layoffs, there have been signs of hope in the form of new digital startups and budding platforms supporting the growth of independent media in Canada. Championing a shift to online news consumption and alternative revenue models, these outlets promise to deliver news that better responds to the needs of communities.

This vision of a more equitable, diverse media landscape drives the work of journalism innovators, including Emma Gilchrist. Working from her suite in a character house in Victoria, Gilchrist serves as the chair of Press Forward, a newly minted association representing a dozen independent media outlets across Canada. (Canadaland is not among them.) A former newspaper reporter, Gilchrist is also the co-founder and editor-in-chief of The Narwhal, a non-profit online magazine dedicated to covering environmental issues.

“When I left the [Calgary] Herald in 2009, I left because I couldn’t really see a future in journalism at that time. It was just so bleak — I’d seen so many rounds of layoffs. About five to 10 years later, there’s a whole new ball game.”

According to Gilchrist, the emergence of social media and a growing willingness to pay for monthly subscription fees online have spurred the growth of digital startups. The pandemic has only hurried these shifts, with more people turning to trusted news sources and paying for quality journalism. As a result, many reader-funded news outlets have seen audience growth. Gilchrist says The Narwhal’s membership rose by 130 per cent last year; the outlet now has more than 2,600 members, with each donating an average of $13 a month.

“I think what really shines a spotlight on what’s broken about traditional news models is that in 2020, basically every news organization had record traffic — but a lot of them weren’t able to convert that into revenue,” Gilchrist says. “I think that’s where a lot of traditional outlets have really struggled to innovate, in terms of how to serve those audiences.”

It’s a sentiment echoed by Kelly Toughill, a journalism professor at the University of King’s College in Halifax. Toughill says legacy media traditionally relied on amassing the largest audience possible in order to attract advertisers.

“There were some wonderful things about that, because you would go to a media outlet and encounter things you didn’t know anything about,” she says. “So, in some ways, I think it was a community-building function.”

But in an increasingly online world, the ability of tech giants to target hyper-specific groups has drained profits from media outlets with broad audiences. Meanwhile, newsrooms focused on serving specific communities have been better positioned to attract advertisers and subscriptions. Digital startups can also evade high overhead costs, which eat into legacy media profits.

While changes in Canadian tax laws introduced last spring aim to support the growth of non-profit news, Gilchrist says there’s still a lack of seed funding. Startups often fail to meet the criteria for federal government support, and independent media has often been left out of conversations about federal policy — a problem Press Forward is determined to address.

“There’s a growing number of independent news outlets,” Gilchrist says. “Increasingly, we wanted to make sure that we had a seat at the table for conversations about the future of journalism in Canada.”

Indiegraf, a network of independent news entrepreneurs that was launched last year, also hopes to tackle these barriers to media innovation. By supplying technology and business tools, Indiegraf has helped journalists launch new platforms or pivot existing ones toward new business strategies.

IndigiNews is one of 18 community-focused news outlets Indiegraf has supported so far. Others include Sun Peaks Independent News, the only local news source serving the resort municipality of Sun Peaks, B.C., and Committee Trawler, a website and newsletter covering Halifax council and committee meetings. Indiegraf has also begun to expand into the United States, with four American projects joining the third cohort of the Indie News Challenge, Indiegraf’s nine-week program to help journalists build and develop their outlets.

“Across Canada and the U.S., there’s many news deserts — places where there’s just not enough news reporting happening, or where there are newspapers or TV stations, but they’ve been deeply affected by layoffs,” says H.G. Watson, the marketing manager at Indiegraf. “We’re trying to support journalist-entrepreneurs — people that are interested in journalism and want to start their own thing — to address this need [for community news].”

The pandemic has exacerbated local news poverty. According to the Local News Research Project’s COVID-19 Media Impact Map, as of March 11 of this year, 67 media outlets in Canada had closed temporarily or permanently. The pandemic has also seen the temporary or permanent layoffs of more than 3,000 editorial and non-editorial staff.

As larger media organizations cut costs and move out of smaller communities, opportunities emerge for community-driven news outlets to fill the gaps. Startups like the ones supported by Indiegraf work to address a niche, while raising audience engagement and connecting with audiences.

In the case of IndigiNews, hiring local reporters has helped the news outlet focus its coverage. In hopes of challenging journalism’s colonial history and its exploitation of Indigenous communities, the outlet prioritizes human-centred stories that go beyond statistics. Gilpin says the IndigiNews team spends a lot of time discussing intention and impact, while working with sources to ensure their voices are shared in authentic, culturally nuanced ways.

“People are reporting on people that they know, communities that they have relationships with and trust with,” Gilpin says. “[Our newsroom] really values relationships and accountability, and it has really raised the standard around the ethical side of reporting.” Gilpin says she is able to spend more time getting to know sources and building trust.

In 2019, the federal government launched the Local Journalism Initiative, a $50-million, five-year program that provides news outlets with funding to hire or pay journalists to cover underserved communities. The initiative is managed by seven not-for-profit organizations in the media industry, with the national association News Media Canada distributing funds for the print and online news sector.

“Even with this Local Journalism Initiative funding, it’s a panel who decides what qualifies as media and what doesn’t,” says Gilpin. “That panel, of course, is majority white men. So that’s still a thing — there’s still people who are deciding what gets funding and what doesn’t.”

Anita Li, a media consultant and journalism instructor at the Ryerson School of Journalism in Toronto, agrees. While she’s glad to see new startups and associations such as Press Forward, she says diversified media ownership remains a priority.

“We really need to be careful not to maintain a centralized kind of power base in Canadian media,” says Li. “You can produce great, equitable coverage, you can do community-driven approaches to journalism, but at the end of the day, the funding and the ownership matter a lot.”

For Li, the growth of independent media signals an opportunity for Canada to pave a new path in journalism.

“I think if we get this right, and we truly represent all Canadian perspectives and voices, we’ll lead by example in a way that no other country can. The more people who see themselves reflected in the news media, the better it is to support and strengthen our democracy.”