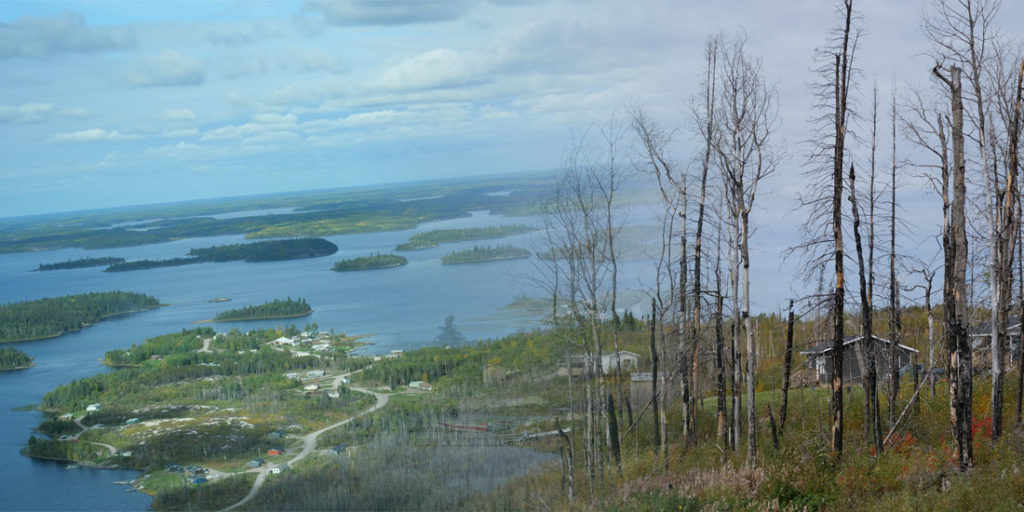 For Little Grand Rapids and other remote First Nations, the worst devastation often comes after the blaze
On the Monday show By CANADALAND
Share

“I was brought here out of desperation,” reporter Sarah Lawrynuik says of a late-September trip she took to Little Grand Rapids, an Anishinaabe community in Eastern Manitoba, accessible only by air and ice road.

Band councillor Blair Owen and his father Oliver, the owner of Amik Aviation, were trying to get media’s attention on the community, so Manitoba Hydro would expedite repair of a transmission line damaged by wildfires in July. The population had been evacuated due to the fires, but over two months later was still unable to return due to the persistent loss of power.

“They worry the longer their people are stranded in hotels all across Winnipeg,” says Sarah, “the deeper the damage will run.”

This week’s CANADALAND brings Sarah’s report from Little Grand Rapids and Winnipeg, about the effects of wildfires that few people see and how governments have to implement policy solutions before climate change makes it all even worse:

Among those Sarah spoke to for her story was Amy Cardinal Christianson, the co-author of First Nations Wildfire Evacuations: A Guide for Communities and External Agencies, based on the experiences of seven First Nations. A Métis woman from the Cardinal and Laboucane families of Treaty 8 territory, Christianson is a fire social scientist with the Canadian Forest Service.

Here are edited excerpts of the insights Cardinal Christianson offered:

On the devastating secondary effects of wildfires:

People really seem to think that once the flames have passed, that evacuations end. But in lots of the communities that we’ve worked with, the loss of power is such a huge thing.

In almost every community, actually, that we worked with, they lost power for a substantial amount of time. And one of the biggest things was when they were returned to their community, you know — you get home and your fridge and your freezers haven’t had power. And many of these communities are reliant on wild meat and their traditional foods. Some communities have two, three big freezers that are now full of moldy, spoiled food that they have to deal with. And sometimes they’ll be given grocery card vouchers, but that doesn’t replace years of traditional meat that they might have lost.

I think that one thing people really don’t realize is the tie-in with infrastructure and how that can be impacted by wildfires.

On a common trauma of the evacuation experience:

You have people going from a dry community, where they speak mostly their traditional language, and all of a sudden going to somewhere where they’re having a hard time reading street signs to take public transportation, and, you know, just kind of feel dumped.

On loss of life:

For the communities that we worked with, I think that there’s not a good understanding of the fatalities or the loss that’s involved with these fire events.

So, you know, I went to this one technical workshop after the BC fires — I think it was in 2017 — and somebody there was saying, “Oh, well, it was a great thing because we didn’t have any fatalities with the fire events.” And a First Nations woman actually stood up there and said, “You know, that’s not true at all. Like, you know, sure, in the 2017 fire events, we didn’t lose anyone being burned by the fires in any of the communities. But we had heart attacks. We had people in hospital because of asthma. We had medical conditions that weren’t properly managed.” There were a few, I think, where evacuees kind of went missing, people couldn’t find them after the event.

I think the best example that I have seen is Tk’emlúps in Kamloops. When communities were evacuated this summer, and past summers, they basically open their Arbour grounds there, they just offer food — you don’t have to be a registered evacuee or anything — they try and help people find accommodation. And they, kind of, have been worrying about money or reimbursement or other things after the fact.

We saw that, too, in Saskatchewan, when Beardy’s and Okemasis First Nation opened up what they called the “Rez Cross,” where instead of going to these communal centres, evacuees could come and stay on a First Nation; they could camp, they could have traditional foods, community gatherings.

I think they’re the examples where there’s less bureaucracy and where First Nations people are really empowered to support other nations. And there’s less reliance on that paternalistic, you know, federal government, provincial government, kind of “We will help you and provide your needs.”

Indigenous people have been using fire on the land to reduce fire risk for millennia. And, you know, we have our stories and our oral histories from our elders — but oftentimes, those aren’t believed, unfortunately, by agencies.

When settlers first started coming to Canada, one of the first things that they wanted to do was to stop fires from happening, to protect timber. And what they didn’t see was that those fires are actually protecting the timber and the big trees out there.

The first fire-suppression campaign that I’ve been able to find was in 1610 in Newfoundland, where they said, “No person shall set fire in the woods.” And basically, as settlers moved across Canada, that came with them. And of course, with that, as we know now, came increasing fire risk.

What we’re seeing now, really, is the loss of basically huge swaths of forests to these massive fire events.