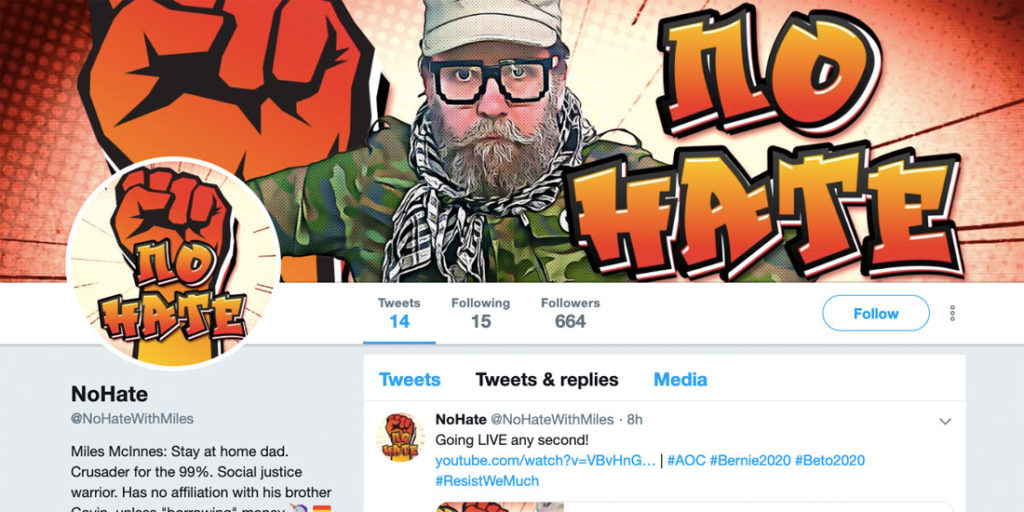 Proud Boys founder Gavin McInnes, who last summer got banned from Twitter for violating its policy on “violent extremist groups,” has once again been kicked off the site, after opening a new account for his alter ego “Miles.”

“The @NoHateWithMiles account was suspended,” a Twitter Canada spokesperson tells Canadaland in a statement. “Based on our Twitter Rules, you cannot attempt to evade a permanent suspension by creating new accounts.”

McInnes rejoined Rebel Media last month in the guise of his longtime “SJW” character that ostensibly parodies the left.  Having possibly forgotten the passwords for two previous “Miles” accounts, @NoHateWithMiles started tweeting on February 12, ahead of the launch of The Rebel series of the same name. It was suspended some time Friday.

The account, which gave its location as “Gaia,” had issued 14 tweets and gained 664 followers as of Thursday evening. “Stay at home dad. Crusader for the 99%. Social justice warrior,” said the bio. “Has no affiliation with his brother Gavin, unless ‘borrowing’ money.🦄 🏳️‍🌈✊”

We’ve reached out to McInnes, who will hopefully explain whether he intends to follow in the footsteps of another Rebel alum who got banned.