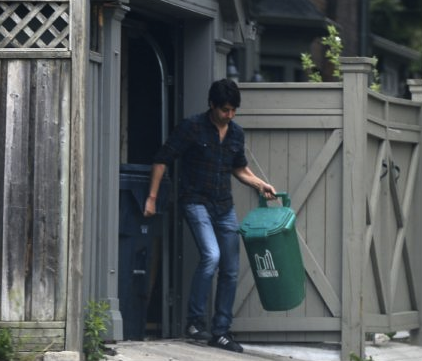 The conditions of Jian Ghomeshi’s bail were changed to allow him to leave the country and move out of his mom’s house, according to documents obtained by CANADALAND. The former host was seen in Washington, DC on November 6, 2015 after the changes to the bail.
By Jane Lytvynenko
Share

The conditions of Jian Ghomeshi’s bail were changed to allow him to leave the country and move out of his mom’s house, according to documents obtained by CANADALAND. The former host was seen in Washington, DC on November 6, 2015 after the changes to the bail.

On January 8, 2015 Ghomeshi was charged with seven counts of sexual assault and one count of overcome resistance by choking. The bail was set at $100,000 and had eight conditions. As reported widely at the time, Ghomeshi had to live with his mom and surrender his passport to the police. He was also prohibited from travelling outside Ontario, owning firearms and contacting several women involved with the case. 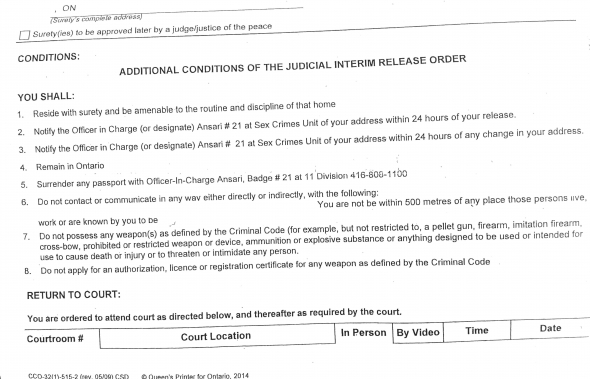 But on May 28 — after two of the charges were dropped — changes were made to Ghomeshi’s bail conditions through the process of an out-of-court bail variation. This means the Crown had to agree to and sign off on the changes. Now, instead of residing with his surety (his mom), Ghomeshi only had to live at an address approved by her and notify the police of the change. Why the condition was relaxed is unclear. The court document approving it says “see attached” but there were no other documents associated with the bail variation outlining the reason. 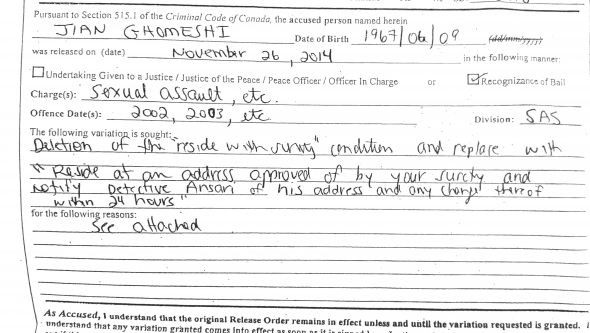 A second change to the bail condition was made on July 21 also with the approval of the Crown. This time Ghomeshi was seeking a change to the “Remain in Ontario” condition. He was allowed to leave the province — and the country — between August 31 and September 15 as well as October 26 and December 7. He was now allowed to have his passport and had to provide the police with a copy of the ticket for his first trip and an itinerary for his second trip. The change was made “to allow Mr. Ghomeshi to travel to leave Ontario for specific trips outside the Province,” says the document.

CANADALAND contacted the Ontario Ministry of the Attorney General to ask what led to the relaxing of the bail conditions and whether Mr. Ghomeshi being a potential threat to women was considered. Here’s what their spokesperson wrote back:

At any time a bail order may be varied if there is a change in circumstances of the accused or the surety. In appropriate circumstances, the Crown may consent to reasonable bail variations requested by the accused.  When the Crown considers its position on bail or on a variation, the Crown must balance a range of interests, including: the protection of the community, the reputation of the administration of justice, public perception of the criminal justice process, society’s interest in ensuring that accused persons attend court and the liberty interest of the accused.

As I said above, the decision on whether or not to allow a variation is ultimately made by the judge or the justice of the peace.

As this matter remains before the court it would be inappropriate to comment further.

We also reached out to Ghomeshi’s lawyer, Marie Henein, for comment on both the bail variation and the reasons for the trips but have not heard back. We will update the story if we receive a response.

One person told us she saw Ghomeshi outside of Canada.

A journalist, who asked to remain anonymous, said she recognized Ghomeshi at Equinox gym attached to the Ritz-Carlton hotel in Washington, DC on November 6. At first she wasn’t sure whether it was the former CBC host using the weight machine, so she looked him up and saw that he had the same tattoo as Ghomeshi. “Unless he has a twin,” she told CANADALAND, “I’m sure it was him.” She was alone and did not approach him.

The relaxing of bail conditions to accommodate already scheduled trips or other circumstances is common, said Leo Russomanno, a criminal attorney who often deals with bail variations. But, it could also mean more flexibility when preparing for the trial. For example, if Ghomeshi kept letters and messages in his home it would be much easier to search through them if he’s not living elsewhere.

And then there’s the issue of women’s safety. The current bail conditions prohibiting him from contacting several women only cover the currently ongoing proceedings and witnesses. There are no conditions restricting contact with other alleged victims. There are 23 allegations against Ghomeshi — three in court currently and one more set to go on trial in June.