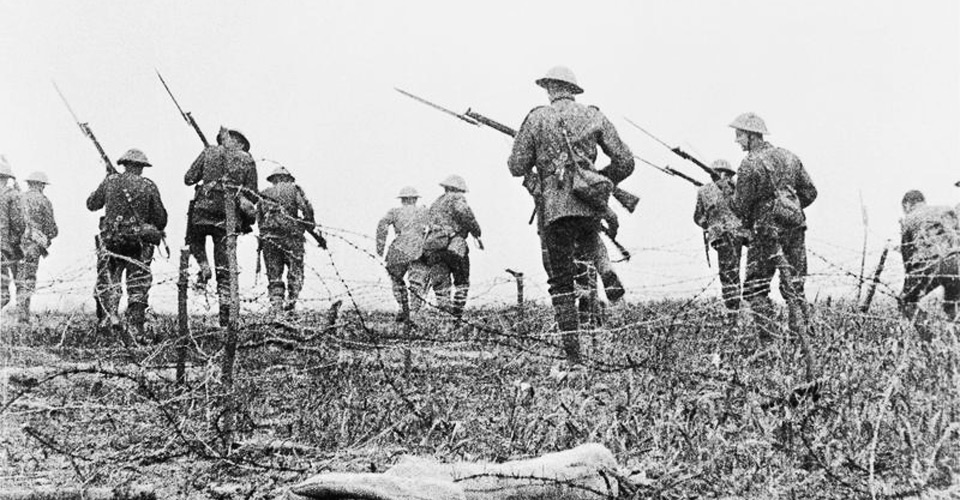 Scenes from The Battle of the Somme have become ubiquitous in Canadian remembrances of the war.
Article By Robert Hiltz
Share

There’s an enduring image from the First World War that you’ve probably seen.

The footage depicts the moment of highest drama we associate with the conflict that ended 100 years ago this fall, of a group of soldiers going over the top of a trench, and crossing the blasted wastes of no man’s land. As they slowly pick their way across a landscape strewn with barbed wire, they disappear into the mist one by one, their fates unknown.

Most years in Canada, it will show up in one Remembrance Day video or another, like these recent spots from Veterans Affairs commemorating the Battles of the Somme and Passchendaele, respectively. It’s an image so enduring that it’s even in the Heritage Minute that illustrates the most mythical moment of the war for this country, the Battle of Vimy Ridge.

But there’s a thing about this footage, though. It’s not real.

It’s from The Battle of the Somme, a silent film that was one of the first feature-length war movies ever made. Much of Somme consists of real footage, shot on the first days of the battle in July 1916. But it was also a propaganda film put together by the British government, in the hopes of boosting recruitment when it was released in August of that year.

And this one section of the film was staged for the final cut. According to Toby Haggith, a historian and curator at the Imperial War Museum (IWM) in London, there were a number of practical reasons for the need to fake the scene. At the time, film technology was quite limited. Shots at any distance were difficult to capture with any clarity. The camera was large and bulky and had to be set on a tripod and cranked by hand. It carried only a few minutes’ worth of film before it had to be reloaded.

But most challenging of all, this was a battlefield.

“The most significant is the practical difficulties of filming such an action — [it’s] too dangerous — balanced with the need to convey the key moment of the ‘over-the-top’ to civilian audiences,” Haggith says.

And so, a few parts of the film had to be staged. “The most notorious is the ‘over-the-top’ scene,” Haggith says, but at most about 90 seconds of the entire film were fake.

So, how did this image become so important in Canada, and how has the Somme film endured?

Part propaganda, part documentary, Somme used frontline footage from the start of one of the war’s costliest battles. People at the time were accustomed to newsreels, short bursts of news before watching a movie. But this was something different, according to Joanne Stober, the Canadian War Museum’s historian of war and visual culture.

“The difference with that, though, was that it was a…full feature film and it had a dramatic arc constructed. It was a five-part film. It was silent, but using 60-some intertitles, it really did draw the audiences through a very dramatic story,” Stober says.

In many ways, images from Somme have become some of the standard ones we use when we want to illustrate the war. “A lot of them now are almost like stock shots,” she says. “Those ones are just striking, they’ve got a space in our cultural memory. A lot of times, the same ones will pop up over and over again because people will see them and look for them year after year.”

In the early parts of the film, the audience is shown the lead-up to the battle. Soldiers smile and wave at the camera as they march to the front. One of the men who filmed it, Geoffrey Malins, wrote in his memoir how he made a point of getting soldiers to look at the camera. This would be the first time their families would have seen their faces in many months. In many cases, it would be the last time they ever could.

It’s the middle part, of the battle itself, from which many of the most reused images come. There are three scenes in particular that tend to recur: the explosion of the Hawthorn mine, the soldiers going “over the top” of the trench, and a wounded man being carried by one of his comrades, who looks directly into the camera. The latter is particularly striking because of how clear it is. It’s made even more poignant by the fact that the man being carried would die soon after the moment was captured on film.

“The film — and especially the over-the-top scene — has been endlessly recycled by film and television makers whenever they wish to convey the nature of trench warfare, the First World War, and even warfare in general,” Haggith says. “These scenes are deeply embedded within the collective psyche of British people and members of the Commonwealth.”

A spokesperson for Veterans Affairs Canada, which produces many remembrance videos that include the over-the-top footage, says they work with historians to make their videos as accurate as possible, but there are certain limitations.

“Original imagery from the First World War is limited, however, there are historically accurate reproductions and staged shots. In the case of the Battle of the Somme Remembrance Moment, the image is a staged shot,” Emily Gauthier says. “The script was developed and the imagery was selected to match [it]. The image is evocative, as it depicts the young men heading into battle, and the limited protection they had, to face the obstacles ahead of them.”

On the first day of the battle, when much of Somme was filmed, the British suffered almost 60,000 casualties, of which nearly 20,000 were deaths. It remains the worst single day in the army’s history. And the battle would drag on for another five months, ending in November 1916. Casualties on the Allied side would total more than 600,000, with almost 150,000 of those being men killed. The Germans would suffer in almost equal numbers.

So parts were filmed behind the lines at a training area where it was possible to give the audience a close-up sense of the climactic moment of attack, without the horrible carnage or danger to the filmmaker.

And this set the stage for the fourth part of the film, which showed the dead scattered throughout the battlefield.

“Audiences, probably the first time for many of them, were seeing bodies on the battlefield, dead bodies. Soldiers who had been smiling and waving at the camera 20 minutes earlier were slumped in the trenches,” Stober says. “That part was very dramatic, and very different from what they were used to seeing.”

But the purpose of the film was to try to increase enlistment and support for the war, so it ends on a happier note. In the fifth part of Somme, the soldiers are patched up, and ready to continue the fight.

For years, the film was seen entirely as propaganda, Stober says, and this limited its study as a pure piece of filmmaking. “I think its categorization as a propaganda film made it so that it wasn’t necessarily the most inspiring film to draw from,” she says.

But a century later, it is seeing something of a renaissance. Somme was restored in recent years by the IWM and they sell copies of it in their store. But the biggest impact of the re-release may have been the tour the film went on in 2016-17, with screenings accompanied by full orchestras.

“Now we see it differently. A hundred years later, it’s getting some of the cinematic attention it deserves as a work of art,” Stober says.

“To think about the people…that would have been in that theatre, who would have been watching that film, who were very much a part of that war effort, I think now we can look back and think of how they received some of those images.”

It’s allowed for a reevaluation of The Battle of the Somme. Removed from the politics of the war, audiences are able to see it as more than a propaganda film. It’s a way for us to empathize with the people of the era, really seeing the true horror of the war for the first time.