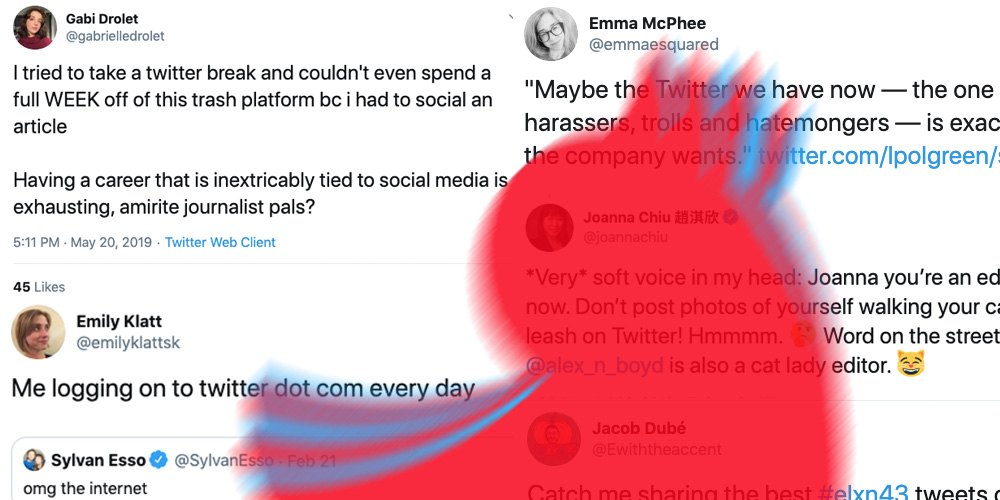 Is The Agony Of Twitter Worth It For Young Journalists?

It can be a valuable, even necessary, tool. It can also, of course, be an anxiety-inducing hellsite.
Article By Bailey Martens
Share

“There are periods of time where I would wake up in the middle of the night and check Twitter and start to feel the symptoms of what I know very, very well as [of] late as an anxiety attack,” says Klatt, the former editor of The Sheaf newspaper at the University of Saskatchewan in Saskatoon.

Twitter is home to many young journalists, who see it as a refuge from the real world where the loudest voices often chant that “the industry is doomed.” It encourages and amplifies shouting out the worth of talented journalists, leading to a sense of camaraderie.

However, having a vast network of peers comes at a price. In a cutthroat industry, young journalists on Twitter can often be hit with imposter syndrome, as others get dream jobs and internships while they are left sitting in their dimly lit student paper newsrooms eating leftover production pizza again.

And yet, many young journalists feel they have to stay on Twitter and try to be funny and relatable for a chance at a job prospect or to keep friendships that exist exclusively through the platform.

All of which has led Klatt to question whether she even belongs in the industry. Watching what seemed like everyone else land a dream summer job at The Globe and Mail, she’s been left wondering what she is doing wrong.

“Am I doing enough? And is my writing good enough? And am I going after enough?” says Klatt.

So is Twitter still worth it for young journalists?

Despite everything, Klatt still considers it an invaluable tool, crediting some of her best friends and biggest career moments to the platform. In the spring of 2018, the undergrad student was contacted about a job opening by an alum of The Sheaf who now works at the CBC. He became aware of her, as well as reached out, via Twitter. She was ultimately hired for casual backfill work.

Gabrielle Drolet, a former opinions editor at the Western Gazette in London, Ontario, attributes to Twitter her optimism towards the journalism industry.

“It’s nice to see not only established journalists on the platform, but especially other young people who are in the same boat as me,” says Drolet. She says her last two freelance opportunities came in emails from editors who mentioned her Twitter presence.

But while she first joined the platform for fun, Drolet’s Twitter presence is now part of an effort to somehow, someday get a job in the industry, and every tweet is therefore calculated.

11:08am: Maybe the real hot girl summer is the friends we made along the way 🔥

11:30am: I wrote about the climate crisis and our impending doom. Read it here-

She says she never tweets something without thinking, “Okay, if this were to go wrong, if someone were to ask me about this, would I be willing to defend it?”

When her tweets get a lot of attention, it’s not just exciting but also stressful. “There’s a fine line, I think, between having fun on Twitter and taking it so seriously that every single interaction on there becomes a factor of stress.”

Emma McPhee, president of the Canadian University Press, has taken a step back.

After getting sucked into Twitter and finding herself prioritizing online views and opinions over what was happening in her day-to-day life, she knew she needed to make a change.

Jacob Dubé, a former editor of The Eyeopener at Toronto’s Ryerson University, tells Canadaland that he has also felt Twitter-driven imposter syndrome.

But as a web producer for the National Post, Dubé’s Twitter presence is not optional. His job depends on him scouring the internet, but on a personal level he isn’t sure that the platform is really all that helpful for being a good journalist.

“Twitter doesn’t necessarily help you do better journalism, because most of it is just other journalists on there,” says Dubé.

For Klatt, simply existing on the platform can be a challenge. Being a part of the LGBTQ+ community, she has seen firsthand the kind of elevated negative feedback minority groups receive. “Twitter is kind of an open field for all kinds of people, whether they are anonymous Twitter bots or Jonathan Kay, to be able to directly belittle you and talk down to you and invalidate your experiences,” she says.

It’s not that backlash towards journalists is new by any means, but now it is personal, according to Klatt.

“Even if you got [an] angry email from readers, it’s not quite the same as like in real-time, back-and-forth kind of communication.”

Drolet notes that while a Twitter presence is not a necessity, it does play a large role in succeeding.

It is the personal aspect that creates investment in other’s careers. “I feel like I have a grasp on your personality, even though it’s probably really curated, and I know what you care about, and because of that, it’s exciting to follow journalists once you know who they are,” says Drolet.

Joanna Chiu, bureau chief of (the soon-to-close) StarMetro Vancouver, tells Canadaland that it is a necessity to be on Twitter. She says she also does not know a single journalist under the age of 40 who is not on it.

Great to meet the class! No. 1 tip: find all the journalists on Twitter – we check Twitter more than email 🤔🤫 https://t.co/jjI9AoBWub

“Unfortunately, for some people who would rather just hunker down and work, it is so very important,” says Chiu. She adds that potential sources can see journalists’ work, which brings both credibility and a sense of their approach.

“Have times where you just unplug where you’re off the grid, so that you’re not always watching it. So when you’re making dinner, you’re not allowed to check your phone, and having sort of little detox periods can help,” says Korol.

Chiu’s general newsroom rule is not to make public statements on beats you cover, so that, for example, a pets reporter probably shouldn’t tweet that they like cats more than dogs.

*Very* soft voice in my head: Joanna you’re an editor now. Don’t post photos of yourself walking your cat on a leash on Twitter! Hmmmm. 🤔 Word on the street is @alex_n_boyd is also a cat lady editor. 😸

But for Klatt, it’s personal topics that drive her to be a better reporter. She wants to chime in on the online dialogue and, if that wouldn’t be possible, she questions if journalism is the right fit for her. Klatt tells Canadaland that she doesn’t want to “shout it from the rooftops,” but wants to express her values and beliefs. She specifically notes stances on climate change, anti-fascist ideologies, and gender expression.

“If having those opinions or values makes me too biased to be a journalist, then I guess I’ll have to find a different field,” says Klatt.