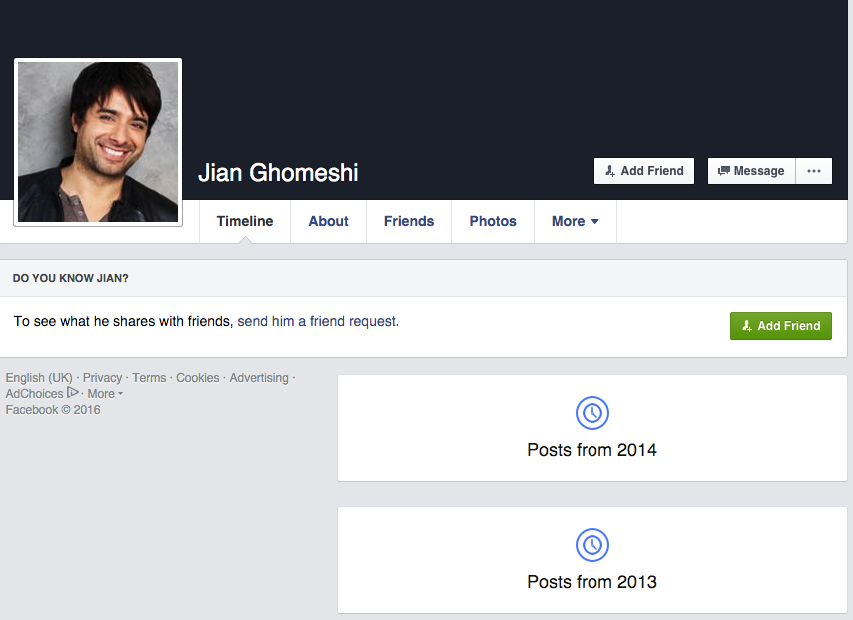 The former CBC host disappeared off social media when the allegations against him first started building, but now he’s back.
By Jane Lytvynenko
Share

Jian Ghomeshi’s Facebook profile, made private after the allegations surfaced, has recently been made public again.

The former CBC host vanished from social media when the allegations against him first started building, but now he’s back. It’s unclear when his account settings were changed to allow for everyone to see his profile, but Thom Ernst, a critic and writer, said a neighbour pointed it out to him in a February 4 email.

“Funny, a woman in our neighbourhood saw my name listed and was very upset with me,” he told CANADALAND. “I know Jian and I followed each other on Twitter – but I didn’t know we were FB friends.”

Multiple people confirm the profile has been scrubbed of all posts made after 2011, meaning one of the things deleted is his infamous post about why he was fired from the CBC.

Mathew Ingram, a technology journalist at Fortune, was taken by surprise by the profile’s existence. “I am definitely going to unfriend him because I think he is pretty clearly a terrible person and a serial abuser of women, and I only wish I had found out sooner,” he said.

The reappearance raises many questions. The obvious is whether this is a part of image rehabilitation or a planned comeback by Ghomeshi. But there’s one aspect that cannot be ignored: Ghomeshi used Facebook to connect with women who later brought forward allegations against him. At least three of the alleged victims said he sent them friend requests after meeting them in public and used Facebook to communicate. According to a report by CANADALAND’s Jesse Brown, some of Ghomeshi’s original accusers said he used Facebook to pursue them and initiate graphic conversations that he would later cite as proof of consent. He would also look through comments female fans posted and reach out to them.

There are 23 separate allegations of sexual assault against Jian Ghomeshi. A decision on the first trial, involving three of the complainants and six allegations, is expected on March 24. A second trial will take place in June. *** jane@canadalandshow.com