“Politically, the magazine seemed to be shining the public image of the Harper government”

“I’ve often wondered, ‘what would [John] Geiger be thinking? Would he be comfortable with how this business model was rolled out, as a journalist?’ He must have thought it was okay.”

In addition to its custom publishing partnerships with corporate sponsors such as Shell Canada and The Canadian Association of Petroleum Producers, Canadian Geographic has partnered with several government entities, including Parks Canada and the Royal Canadian Navy.

The Parks Canada partnership has been particularly robust, resulting in Canadian Geographic’s non-profit parent organization, the Royal Canadian Geographic Society (RCGS), being granted the role in May 2014 of official mouthpiece for the Franklin shipwreck expedition.
As the financial relationship between the RCGS and the federal government flourished, so too has the cross-promotional relationship between RCGS CEO John Geiger and Prime Minister Stephen Harper. Geiger has lent the Prime Minister the approval of his venerable institution – perhaps the oldest non-profit environmental group in Canada. He has honoured Harper at RCGS galas and created photo opportunties for the Prime Minister to be seen as a champion of Canada’s natural grandeur, its geography and history. The Prime Minister has publicly celebrated and honoured Geiger, and his organization.
CANADALAND has reached out to John Geiger through every available means to request comment for this post. Our phone messages and emails have gone unanswered.
Here is John Geiger giving honourary RCGS fellowships to Laureen and Stephen Harper  (Nov.13,2013): 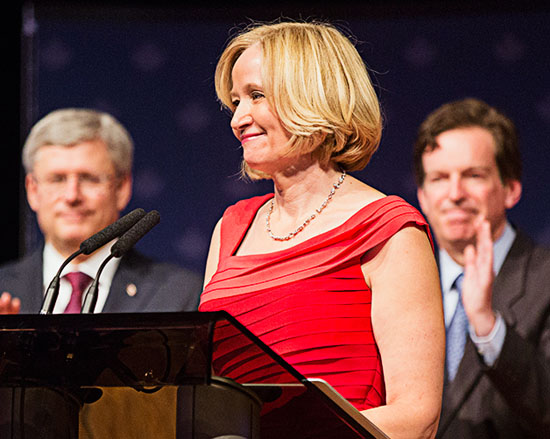 Here is Stephen Harper’s private meeting with John Geiger, which was publicized by the RCGS (May 6, 2013): 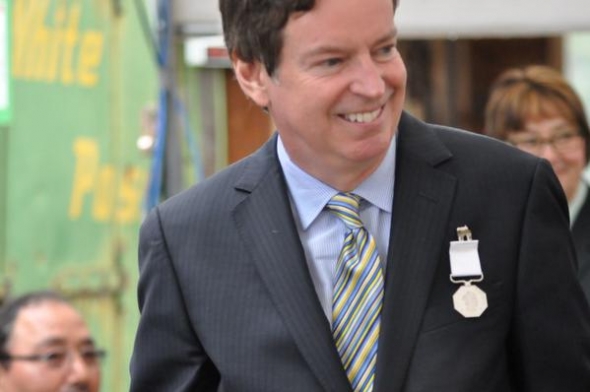 Here are Stephen Harper and John Geiger visiting the Franklin shipwreck salvage expedition and posing behind the RCGS flag (August, 2014): 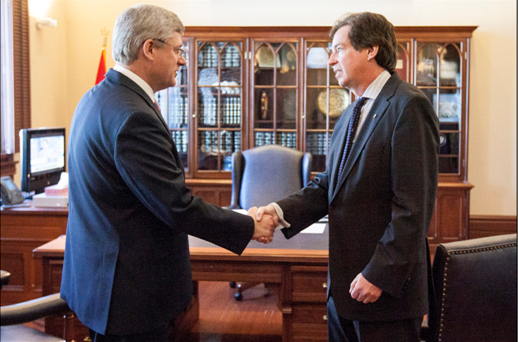 In addition to these public recognitions, a former editorial employee of Canadian Geographic has told CANADALAND that John Geiger and Andre Prefontaine were guests of the Prime Minister at his official summer retreat at Harrington Lake, a government-owned property.

When asked if this were true, the Prime Minister’s Director of Communications, Rob Nicol, provided CANADALAND the following statement:

“I understand that all Franklin partners have been invited to attend private functions hosted by the Prime Minister or Mrs. Harper.”

****
The mutually beneficial relationship between John Geiger and Stephen Harper illustrated above has come under scrutiny in the wake of revelations brought forward by Pulitzer-prize winning journalist Paul Watson.
Watson has provided to CANADALAND a letter sent from former RIM co-CEO Jim Balsillie to the Minister of the Environment and the Prime Minister. Balsillie writes the following words about John Geiger to Minister Aglukkaq:

“The CEO of RCGS makes a claim that his organization has been doing the search “for years, catching a break this year” when in fact they joined the Victoria Strait partnership in April of 2014 as a support partner to help with communication and outreach activities.”

In order to fully report on the controversy surrounding Geiger, Paul Watson resigned from the Toronto Star, whose editor-in-chief Michael Cooke can be heard in a recording, passing on the report as not a story “for the Star to engage in”. Watson says that six weeks earlier, his editor placed a “reporting ban” on him, instructing him that “you must cease all reporting on anything related to John Geiger.”
John Geiger’s wife is a Toronto Star editor.
Paul Watson has told CANADALAND there is much more to the controversy, and has promised his report will be published imminently.
****
jesse@canadalandshow.com
Share
Sign up for our newsletter
Latest Stories