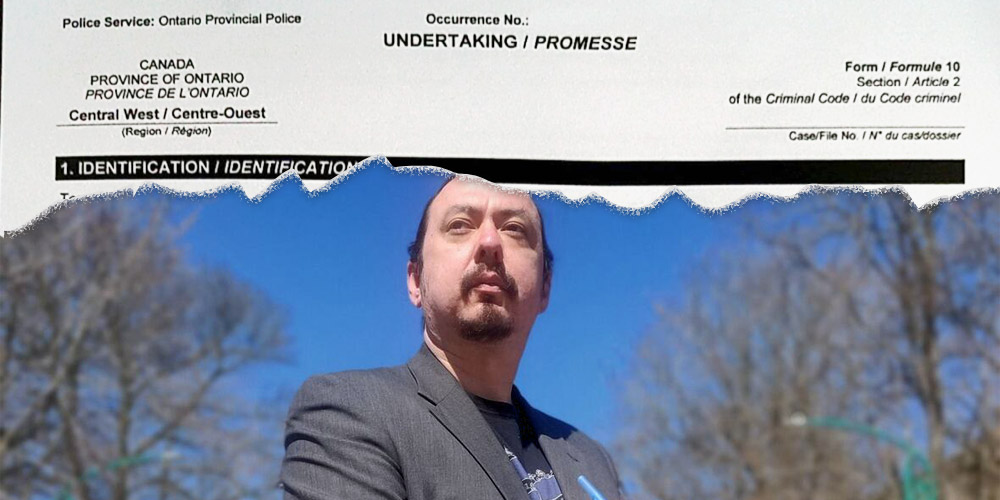 The “Get Out Of Jail” Card That Comes With A Price

Amendments to the Criminal Code last year were intended to lessen the burden on courts across the country by reducing the number of unnecessary bail hearings.

One change toward that end involved encouraging the use of “undertakings,” by expanding the range of conditions that police are allowed to impose on accused persons in exchange for their release, without having to first go before a judge. As a check on this, the amendments said that police should only put in place conditions that are reasonable and necessary.

But the case of Indigenous journalist Karl Dockstader points to potential problems with the changes — because if and when police do impose unreasonable conditions, the only options available to someone charged with a criminal offence are to refuse to sign the undertaking (and possibly be kept in jail until a bail hearing), or to sign the document and then perhaps file a motion in provincial court at a later date to try to get those unreasonable conditions dropped or amended.

Letting the police decide what is reasonable and necessary has long been an issue, under both the previous framework and since the amendments took effect, suggests Jonathan Rudin, program director of the Aboriginal Legal Services clinic in Toronto.

The Ontario Provincial Police are still refusing to say exactly what actions Dockstader engaged in that resulted in his being charged on September 2 with mischief and disobeying a court order. They are also declining to comment on the sweeping conditions they imposed on him, which put limitations on his ability to report on a land dispute at a residential development in Caledonia, Ontario, near Hamilton.

Last month, an Ontario Superior Court judge extended a temporary injunction that prohibits protests at the site and on any road in the county of Haldimand.

Dockstader, who is co-host of the independent podcast One Dish One Mic, which is also broadcast on a St. Catharines radio station, has been reporting on the dispute since protests began at the site in July. The CANADALAND contributor was also “embedded” with the protesters for about a week this summer and has said that he participated in a lacrosse match at the site.

His lawyer, Emily Lam, says that police have declined to provide any information beyond that of the crimes with which Dockstader has been charged.

“We do not know what he is alleged to have done. No particulars have been provided, and there is no indication as to what the evidence actually is,” says Lam, a partner at Kastner Lam LLP in Toronto.

OPP Constable Rodney LeClair says in a statement that it would be “inappropriate” to provide any information about the charges or conditions.

“I am aware of the exaggerated and inaccurate information that has been on social media,” the police spokesperson says, although he would not elaborate.

On September 17, the OPP charged a second Indigenous journalist in connection with reporting on the land dispute. Starla Myers, of Real Peoples Media, also faces mischief and disobey-court-order charges.

Both reporters are not permitted to be at the site and are prohibited from communicating with the owners or employees of Foxgate Developments Inc.

A third condition is a prohibition on participating in “any unlawful protests or unlawful demonstrations.” Police imposed it under a section of the Criminal Code that allows for “any other specified condition for ensuring the safety and security of any victim of or witness to the offence” in question.

Rudin, of Aboriginal Legal Services, says it is solely up to police to decide on the conditions if someone charged with a criminal offence is going to be released without having to go through a bail hearing.

Dockstader’s conditions, which the OPP imposed as a condition of release under what is known as a “form 10 undertaking,” may be contrary to both the spirit of last year’s amendments to the Criminal Code and a recent ruling by the country’s highest court.

“The OPP has an obligation to follow the Supreme Court’s decision in Zora,” says Chris Murphy, a Toronto-based defence lawyer. “The presumption of innocence means the default position is supposed to be release without conditions. The state has to justify why conditions are necessary,” he says.

The Supreme Court, in its ruling in R. v. Zora, noted that individuals may agree to conditions that “are unnecessary, unreasonable, and even potentially unconstitutional,” in order to avoid being held in custody for what might be a contested bail hearing.

“It is in principle wrong to take coercive measures against people for preventive reasons unless there are very strong justifications for doing so,” the court stated, quoting an Oxford study of the concept of “Preventive Justice.”

That Dockstader signed the undertaking is completely understandable, says Murphy, who adds that some of the OPP’s conditions may fit the definition of what the Supreme Court described as coercive in Zora.

The defence lawyer suggests the prohibitions against contacting anyone who works for Foxgate or participating in any “unlawful protest” are unreasonable.

In Murphy’s view, a single condition that restricts Dockstader from being present at the dispute site, unless he is acting in his capacity as a reporter, would be reasonable.

To try to have his conditions of release amended prior to his first scheduled court appearance in late November, Dockstader will have to bring an application in provincial court. If the Crown does not agree, then as part of its response, it will be required to outline the reasons the journalist was charged.

The injunctions to try to stop the protests were initially obtained by Foxgate and Haldimand County on July 30 and August 7. They were extended by Superior Court Justice John Harper in a ruling issued on August 21.

The protesters were ordered to vacate an area they had blocked, which they have called “1492 Land Back Lane.” The court order prohibits any attempts to restrict access to the site by Foxgate and its employees, and bans protests on any road in the county.

Foxgate had entered into an agreement with the Six Nations Elected Council in 2019 to place funds into a trust for land development, which followed an earlier transfer to the council of a different parcel of land [pdf].

In his ruling, the Superior Court judge questioned the motives of the protesters. “In the case before me, there have been no aboriginal rights asserted. The ability to consult and negotiate with those who have not and will not engage the court process is limited,” Justice Harper wrote.

He described the protests and property damage as a form of “anarchy.”

“Open and flagrant disregard for regular order, laws, and orders of this court cannot be condoned or tolerated. If the rule of law is not upheld in the circumstances of this case, chaos, mayhem, and anarchy would prevail. This is not the way our Canadian society is. Central to our values is the rule of law,” he wrote.

“It applies to everyone, without exception.”