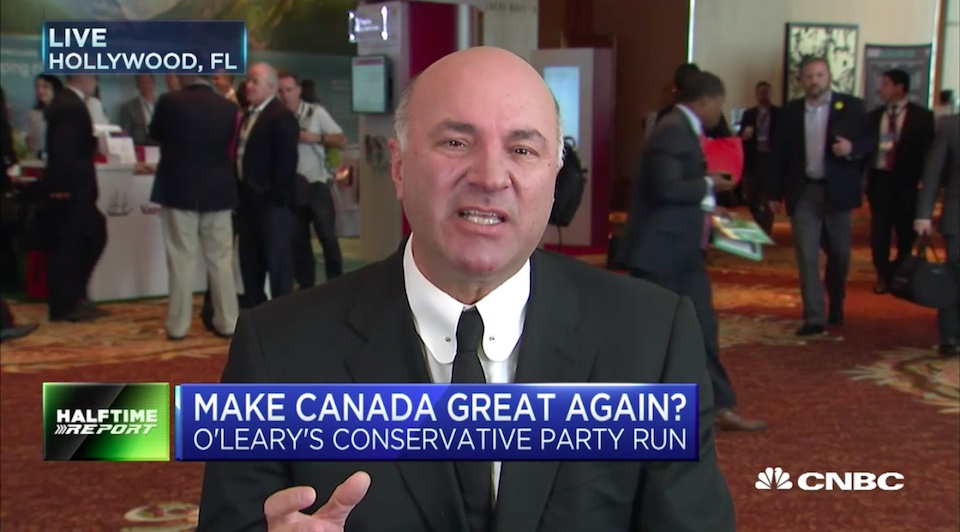 Kevin O’Leary Is Still Being Paid To Talk Politics On U.S. Cable TV

Two months after being dropped as a commentator by Bell Media channels in Canada, Kevin O’Leary continues to be paid to talk politics on U.S. cable television.

The front-running leadership candidate for the Conservative Party has an ongoing contract with CNBC to be a talking head on the business-focused news network, where he uses his appearances to talk up his candidacy, trash Canada’s Liberal government, and advocate policies he’d propose if he won the Tory leadership and — by his own extension — became prime minister.

CNBC confirmed that O’Leary, who entered the leadership race on January 18, remains part of its regular stable of talent. “Kevin O’Leary is one of more than 75 paid contributors to CNBC,” a spokesperson said in an email. They wouldn’t say what, if any, policies the network has regarding paying active politicians.

In an appearance on the Fast Money Halftime Report posted January 27, O’Leary talked about the Keystone XL pipeline, and his personal stake in the contentious project:

“I’m a huge investor in Canada and in TransCanada pipeline — big position for me. So I know that we spent $3.2 billion getting screwed around by the Obama administration for eight and a half years,” O’Leary said. “I want my dough back. I’m not happy about it.”

The O’Leary campaign did not respond to a number of requests for comment. We’ll update this story if we hear back.

Specifically, press secretary Ari Laskin did not answer whether O’Leary planned on continuing his relationship with CNBC if he were to become Tory leader; whether O’Leary had contracts with any other news networks; or whether O’Leary was acting in his role as a television personality looking to entertain or as a serious candidate speaking of real policy.

Shortly after declaring his candidacy, O’Leary told media his previous statements as a TV commentator should be ignored. He wasn’t a candidate then, he argued, and was merely trying out ideas for the audience in an attempt to be entertaining.

The moribund Keystone XL pipeline, which would bring oilsands bitumen from the Alberta fields to the U.S. Gulf Coast, was recently revived when U.S. President Donald Trump issued an order permitting its construction. Keystone XL had been blocked by the previous administration.

As prime minister, O’Leary would presumably be in a position to negotiate the trade relationship with the U.S. government, and some of the terms to get the pipeline built. O’Leary appeared on the Halftime Report from Hollywood, Florida, on January 23 — less than a week after announcing his run for the leadership — where he spoke of some of the concessions he might offer to get the pipeline built if he were prime minister.

“I want to get my hands dirty in big files like XL pipeline. If Trump and I were working on that, we’d get that deal done. I know he wants equity, I know he wants royalties,” O’Leary said. “I want my $3.2 billion back, getting screwed around by Obama for eight years. That’s what we’ve lost as taxpayers and shareholders in TransCanada Pipelines.”

He also talked about what kind of political war he’d look to wage against Prime Minister Justin Trudeau while he waited, outside the House of Commons, for the next federal election.

“I’m going to be the leader of the Conservative Party for the next three years. And basically, that gives me a flashlight of transparency to make his life hell,” O’Leary said. “If I see policy I don’t like, I explain it to the Canadian people. I can read a balance sheet, I can read an income statement, I can assess risk. I can make his life a living hell. That way, I can make him do as little as possible ’til I get there to turn the country around.”

In addition to his work as a contributor there, CNBC owns the cable broadcast rights to Shark Tank, the ABC reality competition series on which O’Leary stars. He has said he would continue with his role on the show through the leadership race and potentially remain on it even if he wins. (O’Leary departed its Canadian counterpart, the CBC’s Dragons’ Den, in 2014 following its eighth season.)

O’Leary makes frequent appearances on CNBC to debate his Shark Tank co-star Mark Cuban. Lately, the two have taken to arguing about the merits of Trump’s presidency. Like most cable TV debates, they usually descend into farce. For example, this exchange from February 17:

“Look, I make the assumption, Mark, and maybe you should be thinking this way, too, that one day I will be negotiating with this guy [Trump] for the benefit of both you and me,” O’Leary said.

“God help us all,” Cuban replied.

O’Leary has also made several appearance on MSNBC, owned by the same corporate parent as CNBC. Neither MSNBC nor O’Leary’s campaign returned requests for comment as to whether O’Leary was a paid contributor.

CNBC is available through most major cable and satellite TV providers in Canada.

Bell Media dropped O’Leary as a paid contributor to its news programming in December when he announced he’d formed an official exploratory committee to become Tory leader. “As a result of today’s announcements, Mr. O’Leary will no longer be a contributor to BNN or CTV News,” a Bell Media spokesperson told the National Post at the time. “He could continue to appear as a guest, but not as a contributor in any official capacity.”