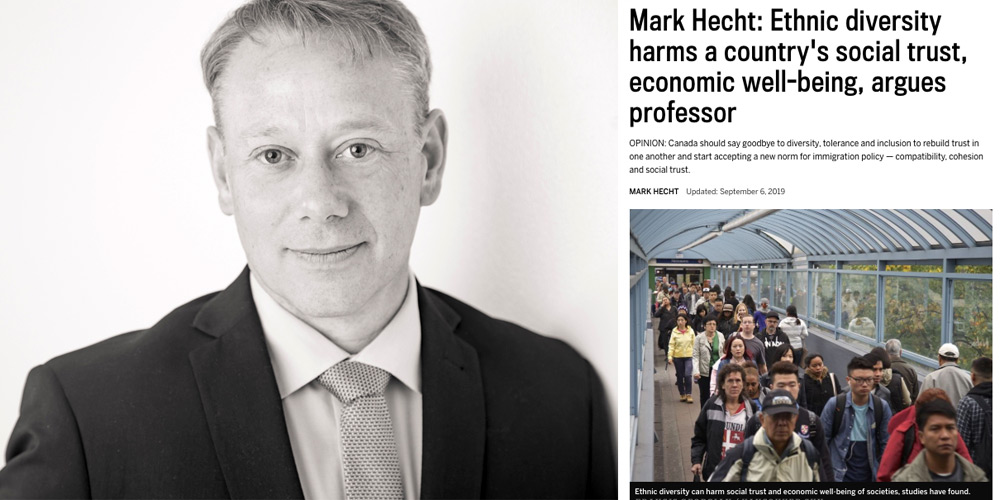 On Friday evening, the Vancouver Sun published an opinion piece by Mark Hecht, a geography instructor at Calgary’s Mount Royal University. The column decried “the dogma of diversity, tolerance, and inclusion” and praised the virtues of homogeneity and exclusion. It cited research by the anti-Muslim Gatestone Institute.

Neo-Nazis, and those of similar ilk, were fans. The paper’s reporters and its editor-in-chief were not. Nor was the executive editor of politics for Postmedia, who — while being charged with taking the whole chain further to the right — wanted to make absolutely clear that he had nothing to do with this. It was removed from the Sun‘s website late Friday but published in Saturday’s print edition, which had already gone to press. (Before being removed, its headline was changed to descibe the author as an “instructor” rather than a “professor.”) The piece remained on the website of the Sun‘s tabloid sister, The Province, until morning.

At 4:00 p.m. Pacific time on Saturday, editor-in-chief Harold Munro published an apology, writing that the piece “contained views that do not meet the journalistic standards of The Vancouver Sun and do not represent the views of our editors and journalists.”

My apology to our readers about the opinion article that never should have been published today. https://t.co/f5GLxwNIhF

So how did the piece get published in the first place? The author just submitted it to the opinion editor.

Hecht, who self-published a 2016 book on “Why Europeans Naturally Invaded The New World,” tells Canadaland in a phone interview that he sent the piece to Gordon Clark, the Sun‘s editorial page editor, who told him it was “interesting.” He says he hasn’t heard anything from the paper or its editors beyond that, not even when they decided to retract it.

Clark — whose “Gordzilla in the City” column for The Province observed during the 2015 Canadian election that women who wear niqabs in this country are “kind of being jerks” — became the Sun‘s editorial page editor last year.

Reached at home on Saturday afternoon, Clark referred Canadaland to Munro. “I know why you’re phoning,” he said, “and I’m not in a position to be commenting for the paper or even myself.”

Munro did not immediately reply to an email.

I stand with @cassidyolivier @nickeagland @kbolan @robshaw_vansun and others who have already spoken. I too am speechless and embarrassed. It's not us. We work hard to do stories and reporting that r the opposite of what that piece is calling for.

Hecht says he first offered his piece to the National Post, but got no response. He says he then came across a column touching on similar subjects by the Sun‘s Douglas Todd, which made him believe that that paper might be more receptive to it.

Todd is the Sun columnist covering “migration” and “diversity,” who, for example, has offered a glowing writeup of a book about what he described as “the increasingly tense decline of white populations in Europe, the U.S., and Australia.”

“I do think that probably Douglas Todd of the Vancouver Sun is pretty good at bringing up subjects in ways that people don’t usually want to talk about,” Hecht says, when asked which Canadian outlets he believes do a good job of covering such issues.

In an email following the paper’s official apology, he points to Todd columns that cited work by the academics Ruud Koopmans and Robert Putnam as representing the “level of excellence in journalism” that attracted him to submit his article to the Sun. “Unfortunately, it looks like the Vancouver Sun caved into pressure from reactionary readers unwilling to engage in rational debate.”

We were all in the newsroom working hard today to tell stories we hope our community cares about. None of us had anything to do with this. If I knew this was being published, I would have said something. And my co-workers would have done so too. https://t.co/wpfjPmwz3Q

Hecht rejects the characterization of his ideas as racist or white nationalist, because “I’m talking about culture, not skin colour.” But in advocating against diversity, tolerance, and inclusion, he did figure he’d be “breaking new ground” in terms of what could be expressed in a mainstream newspaper.

“I did expect a reaction. I just didn’t think it was going to be quite so large, to be honest.”

He believes it’s a “sign of the times” in Canada that opinions such as his can’t be “seriously debated.”

The report he cites on fractionalization that he uses to condemn diversity and Muslim immigrants says the opposite – that religious diversity is correlated with economic success (with authors noting that negative effects elsewhere closely related to geography & colonialism). 2 pic.twitter.com/xw3MvELLkN

In 2017, while Harvey Enchin was the Sun‘s editorial page editor, the paper published an op-ed by former Canadian ambassador Martin Collacott that darkly warned of “population replacement” by non-white people in Vancouver and across the country.

Douglas Todd did not immediately reply to a request for comment on Hecht citing him as his inspiration for offering the piece to the paper.