Media Fact Check: What the Press Got Wrong About Alan Kurdi, and What It Got Right

Yesterday Postmedia's Terry Glavin broke the news that the tragic Alan Kurdi story has a Canadian connection: the drowned child's family had tried and failed to emigrate to Canada, and their case was hand-delivered directly to immigration minister Chris Alexander himself, who did not take urgent action.
News Brief By Jane Lytvynenko
Share

While the essence of the story is true, the original report alleging Alan’s father Abdullah was denied refugee status in Canada was false.

Because of that conflated detail in Glavin’s article, hyperbolic headlines from Canada and abroad, a new piece of misinformation entering reports through a flawed wire story, and arguably insufficient corrections and clarifications from Postmedia and others, many are now confused about the accuracy of the entire original story. Others still have seized upon this confusion as evidence of bias on the part of the media, sparking outraged tweets from partisans and critical hot takes from pundits.

CANADALAND has tracked the erroneous coverage. Here’s what happened yesterday, as best as we can tell.

Alan’s father did not apply for asylum in Canada.

After the Ottawa Citizen broke the story, Citizenship and Immigration denied receiving Abdullah’s application to come to Canada.

CANADALAND reached out to Terry Glavin, questioning how the false information made it into his report. From Glavin’s response:

“…Auntie [the sister of Abdullah Kurdi] and Fin [Fin Donnelly, MP for Port Moody-Coquitlam] conflated (as did I, consequently) a G5 [sponsorship] application for Mohammed and family with a carefully constructed submission to Alexander co-authored by Donnelly setting out a plan to get Mohammad and family, and Abdullah and family, to Canada. The plan was to G5 Mohammad first, then Abdullah (the Kurdi family isn’t rich and this stuff costs money). All set out in the Donelly/Kurdi submission.

But with the news cycle already in motion, publications printed the wrong information.

Hey, @VancouverSun, time to update/correct your website, no? pic.twitter.com/KCwAJulo6v

The worst headline of the day (worse even than the @nationalpost‘s front-page!) pic.twitter.com/YDWBpv6WLB

Abdullah was not offered Canadian citizenship

Building on Glavin’s article was another report that claimed Abdullah has been offered citizenship in Canada but declined it. CANADALAND wasn’t able to verify where the new information came from, but its earliest appearance was either in a Reuter’s article or a CBC article. They both cited Alan’s father as the source.

Glavin said the report (which he did not include in his coverage) originally stemmed from a Turkish journalist but did not provide a link to the report. CANADALAND could not track down the Turkish story. 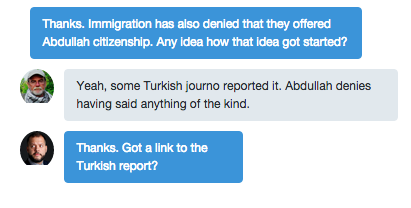 The CBC, the Globe and Mail, and the Huffington post all picked up the false story, which still lives on in small and niche publications, but did not print any corrections.

“Canadian officials had now offered” boy’s father “citizenship after seeing what had happened but that he declined.” http://t.co/z7kCpNfEJE

Editor’s note: In later tweets, Chattopadhyay and Southey said the story is false. The above tweets are meant to reflect the news reports as they were coming in.

Despite getting details wrong, most publications did not issue corrections about the errors, which are common in a breaking news environment.

Glavin’s story in the Ottawa Citizen has an update at the top and the CBC printed a correction at the end of its article noting Abdullah did not apply to Canada, but CANADALAND did not find any other corrections from major publications.

Adding to the confusion, those who reported Abdullah declined the offer of Canadian citizenship quietly removed the story or changed the headlines. The CBC story submitted to Reddit now links to a story with no correction or even mention of the report. A Huffington Post story has yet to update the claim, and the Globe and Mail’s copy has been removed entirely. 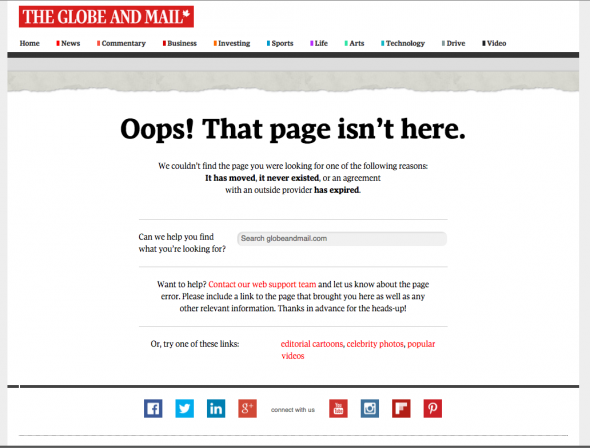 Journalists still covering the story are trying to put themselves at an arm’s length from the mistakes. Christie Blatchford decried the “searing (and inaccurate) headlines” of yesterday, without mentioning that chief among these was the one printed on the front page of her own National Post. Rosie Barton in her Power and Politics interview with Alexander said there “were reports he was offered Canadian citizenship,” not mentioning the CBC was one of the first outlets to report it.

The conflicting reports, not countered by clear corrections, added to the confusion and anger.

That emotion you see in the Media Party? It’s not sorrow or compassion for a little boy. It’s political lust, hatred for Harper, disguised.

It did not take long for conservative publications to claim the Media Party is “exploiting the tragedy” and say “the Liberals and the NDP sharpened their knives and went after Alexander.”

All of this distracts from the coverage that asks the right questions: What could we have done better? How can we do more to help? Is Canada doing as much as it could?

Whether it was Alan’s family or his kin who applied for Canadian refugee status strikes me as irrelevant in the bigger scheme of things.

As National Post editor Jen Gerson suggests, the blunders in reporting this breaking news story do not change the core substance of it: the drowned boy whose picture made the world suddenly care about the refugee crisis might have found refuge in Canada. His family had tried. Our Immigration Minister was directly approached about this specific case.

The story would have been no less impactful had it been reported accurately, and there is no evidence to suggest that the mistakes were made out of partisan bias or intent to sensationalize or deceive. They were mistakes, which often happen in breaking news stories.

But the lack of media transparency in correcting and explaining the mistakes creates an opening for a counter-narrative of Media Party conspiracy, which is currently percolating, obscuring still the truth about Alan Kurdi and whatever actions we might possibly take to keep others from meeting the same end.