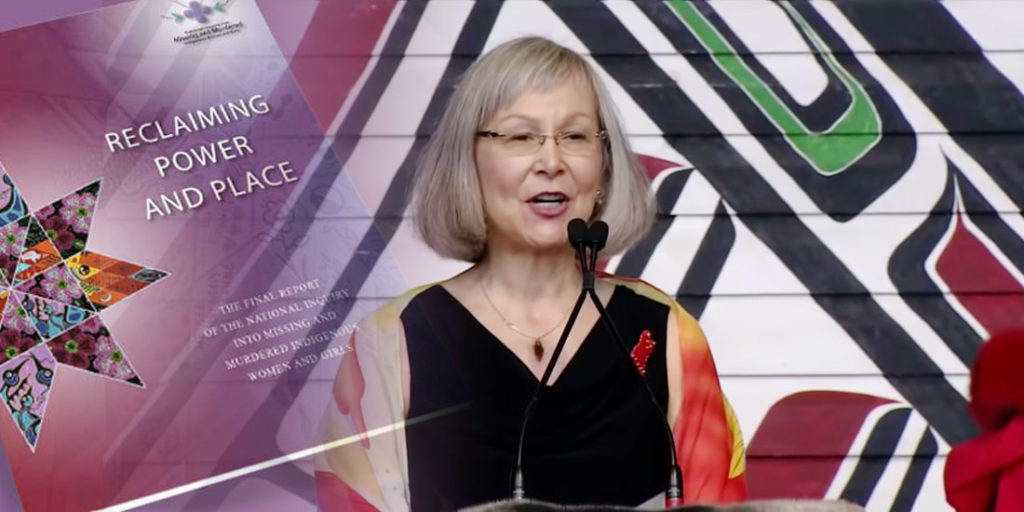 After years of interviews with thousands of victims of violence as the chief commissioner of the National Inquiry into Missing and Murdered Indigenous Women and Girls, Judge Marion Buller delivered a final report last week that includes hundreds of uses of the word “genocide.” Buller said the commission used this language to “hold up a mirror to Canada.”

In quick order, Canada’s media class smashed Buller’s mirror and ignored all those who have shared in the pain of the missing and murdered women. Some attempted to divorce the issue of Missing and Murdered Indigenous Women and Girls from the concept of genocide, ignoring charges of forced sterilization as recently as 2017 and the reality that targeting women destroys a culture and a community’s ability to continue into the future. Chantal Hébert in the Toronto Star warned the powerful phraseology could see the report ignored. The Star’s editorial board suggested we need “a new word” for the harms of colonization, because “‘genocide’ isn’t it.” Over at The Globe and Mail, the editorial board said the charge of genocide “doesn’t ring true” and “simply does not bear scrutiny.” In the National Post, Father Raymond J. de Souza, a Roman Catholic priest, assured readers the charge just does not “comport with Canada’s record, or how most Canadians understand our country.”

Having spent the day among settler journalists at the MMIWG Inquiry final report release, I'm reminded how deeply engrained colonialism is in Canadians’ psyche. I didn't need to read the comments section of today's stories — colonialism is ubiquitous. Even in journalism. 1/x

The near uniform dismissal from national, non-Indigenous columnists and others with large social media platforms, such as Jonathan Kay, who suggested that if genocide is the word for 3,000 or so murders then we’d need a new one for “actual” genocides, was entirely predicted. Even before the flurry of columns were out, commentators anticipated the dismissal of the report and its findings. Some found the coverage so bad, they have rejected contributing to some mainstream media outlets. Suggesting the charge is hyperbolic, by focusing on death counts, does not give hearing to the violence behind it. Indeed, what it does is clearly illustrate Canada behaving exactly like the nation the commission and Buller describe — a dismissive, systemically racist, settler-colonial state.

I've made the decision to no longer write for @globeandmail based on this editorial – written by editors who clearly have not read even the supplementary report on the legal reasons the word "genocide" was used. They are shaping public opinion against Indigenous women like me. https://t.co/XopbEkb4gp

I guess today's a day where I get to wonder whether I should continue to work with @cbc, considering their coverage.

I'm so disappointed and hurt by it, and what it says about how they view the Indigenous people who contribute to their service.

It seems lost on virtually everyone that one of the report’s recommendations for media is to “support Indigenous people sharing their stories, from their perspectives.”

But while this may be so, does the charge of genocide actually fit for Canada and its treatment of Indigenous peoples, particularly women and girls? The argument is stronger for yes than no.

Indigenous women today, in 2019, are 12 times more likely to die at the hands of violence or go missing than non-Indigenous women. This stat is baked into news stories by a news media composed, overwhelmingly, of non-Indigenous reporters, who do so without context, as if such a stat can just happen. Buller and the commission detail how these stories are but the newest chapters of a still-happening tragedy that stretches back, at the very latest, to 1867.

What these Indigenous women receive is too often something other than justice. Cindy Gladue, and the trial that followed her death, is just one example. Gladue, who Bradley Barton was with in an Edmonton hotel in 2011, bled to death from an 11-centimetre tear in her vaginal wall. Barton, who is white, was charged with Gladue’s murder but acquitted. During the trial, the Crown lawyers racialized Gladue as “Native” or denigrated her as a prostitute more than 50 times. The Supreme Court has ruled Barton should stand for a retrial, for manslaughter, and that the courts failed to protect Gladue’s dignity. It also ruled the trial judge failed to hold a rape-shield hearing and the Crown failed to object when Gladue’s sexual history was brought into the courtroom.

This is entirely the commission’s point. Rather than focusing on the actions of individuals or on death counts, it asks us to pay attention to the patterns of Canada as a colonial state. Our systems and institutions are founded on settler colonialism, a logic that dispossesses Indigenous peoples not only of land but also of language, culture, religious traditions, identity, self-worth, and ultimately, in the case of too many, of life.

Few pundits have argued against this history. They do not contest that the Canadian state exerted systemic discrimination — think the residential school system (which ended in 1996), or the forceful removal of children (the Sixties Scoop), or stories of children threatened by nuns with having their tongues nailed if they spoke their language, or the banning of the potlatch. They draw a line, though, placing these events safely in the past, and focus on individuals rather than the logic of colonialism. Against this view, Buller and those on the commission instead argue that the system — while perhaps softened, made more polite with Royal Commissions and official apologies, and a few less boil-water orders — continues in the present.

But what of Kay’s related charge — that, essentially, the word choice of “genocide” is hyperbole? It’s just, to borrow Kay’s stance, 3,000 murders, after all. There, too, we find evidence of the pundit class lacking factual footing.

In 1944, Raphael Lemkin, a Polish Jew who escaped the Nazi German plan of extermination in his country, coined the term “genocide,” seeking to keep the definition broad enough to include eight manifestations, including cultural genocide. Many pundits have built their arguments around the fact that the UN General Assembly contemplated but ultimately did not include “cultural” genocide in its 1948 resolution adopting the Genocide Convention, instead focusing on the physical and biological aspects of Lemkin’s concept.

What the critics have failed to note, however, is that the UN convention’s definition of genocide nevertheless reads like a list of actions taken against the Indigenous population of Canada, including “imposing measures intended to prevent births within the group” and “forcibly transferring children of the group to another group.” That is the definition the commissioners are using and that Canada’s own Crimes Against Humanity and War Crimes Act relies on. Indeed, the report outlines the legal analysis of the term in a supplementary report [pdf].

The mirror Buller has held up may be broken, but this does not mean the ugliness it brought into uncomfortable view for a brief moment does not exist. It is difficult for people to accept that they have benefitted from something named “genocide.” Just three nation-states — Germany, Rwanda, and Cambodia — openly concede their own acts of genocide. Across human history, the vast majority of systemic dispossessions of land, culture, language, identity, and yes, even life, have not received acknowledgement from the states that oversaw them. Canadians’ reluctance to engage with the commission’s findings should not come as a surprise. Nor should media dismissals, which parallel judicial biases and, like them, are rooted in the larger culture.

Buller’s words are hard. That does not make them wrong.

Danielle Paradis is a Métis writer living in Edmonton. Tim Querengesser is a writer in Edmonton. Shama Rangwala is a lecturer at the University of Alberta.