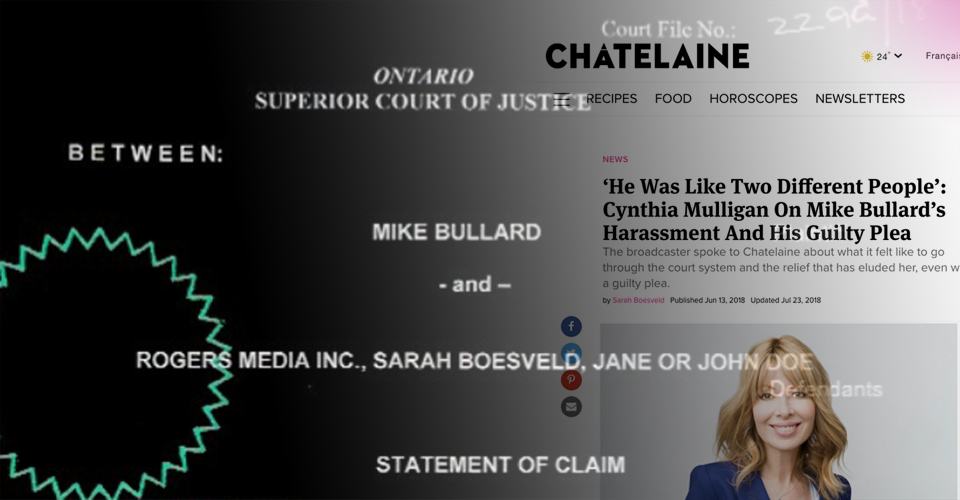 On Wednesday, comedian and former TV and radio host Mike Bullard served Rogers Media and Chatelaine senior writer Sarah Boesveld a statement of claim for defamation. The suit asks for $6 million from the defendants: $1 million in general damages and $5 million in punitive and/or aggravated damages.

“The position of Mike Bullard is his [defamation] case is one of the most egregious, he’s suffered harm. He’s lost his job, he’s having a difficult time finding alternative employment,” Bullard’s lawyer, Joseph Villeneuve, says in a phone interview.

The statement of claim against Rogers, Boesveld, and a John or Jane Doe (representing an “as of yet unascertained fact-checker and/or editor”) demands they remove “all broadcasts and publications that allege, in their natural and ordinary meaning or by innuendo, that Mr. Bullard was guilty of stalking / criminal harassment.” The suit claims they published words that were responsible for subjecting Bullard “to ridicule, hatred, and contempt” and caused damage to his professional and personal reputations by implying that he is “unfit for employment and/or intimate relationships.”

The claims in the lawsuit (which is appended below) have not been tested in court.

Bullard’s suit is in response to Boesveld’s Chatelaine story “‘He Was Like Two Different People’: Cynthia Mulligan On Mike Bullard’s Harassment And His Guilty Plea,” a Q&A with CityNews reporter and Bullard ex-girlfriend Cynthia Mulligan. The article was published after he pled guilty in early June to making harassing telecommunications; a more serious charge of criminal harassment was dismissed. A week after the libel notices were served, Boesveld’s story was pulled from Chatelaine’s website, only to be reposted in its entirety days later.

(Bullard also pled guilty to two counts of breaching court orders and was given a conditional discharge, six months probation, and ordered to complete a Partner Assault Response program and have no further contact with Mulligan.)

The statement of claim asks that the case be heard in Oshawa, east of Toronto. Villeneuve also filed a jury notice on his client’s behalf, requiring that the matter be tried by a jury.

“Mike Bullard believes that a fair-minded, common-sense approach will be taken by the jury and that he’s likely to enjoy a tactical advantage,” Villeneuve says, adding that “jurors are not bound by prior judicial awards, within reason, for damages.”

“I will just say that jury trials in defamation are fairly uncommon,” says media lawyer Daniel Burnett, who teaches at the University of British Columbia’s journalism school, “but people choosing a jury trial and later changing to judge alone is not uncommon [because of] nervousness over the uncertainty of juries.”

“The vast majority of civil trials in Ontario are heard by judge alone,” says Halifax-based media lawyer Nancy Rubin. “A jury trial in a defamation action adds a lot of complexity because the judge has to determine questions of law and the jury determines questions of fact. There are also shifting burdens, which create evidentiary challenges for the lawyers and the jury.”

But, says Hilary Young, a University of New Brunswick law professor, “Defamation is thought to be well-suited to jury trials because the issue is the opinion of the plaintiff among members of the public. However, juries make trials longer and more expensive.”

Last week, CANADALAND analyzed three libel notices that Bullard served back on July 11 for articles and tweets, published after his guilty plea, that he believes defamed him. In addition to Boesveld and Rogers, Toronto Star columnist Heather Mallick and Torstar Corporation, and HuffPost Canada editor-in-chief Andree Lau and AOL Canada, were served notices, although further legal action hasn’t been commenced against them as of yet. Mallick’s tweets referenced in the one notice were deleted shortly after it was served, and last Thursday, the HuffPost article in question was amended to clarify references (and remove links) to Mulligan’s original draft of her victim impact statement, which had been posted to Facebook by a friend and former colleague. (It differed from the version read in court, which contained redactions made by the judge as part of the plea deal.)

“As to the amount claimed, including the claim for punitive/aggravated damages, it’s exponentially higher than any award I’m aware of,” Rubin writes in an email. “Hill v Church of Scientology set the high benchmark in 1991 at $1.6 million. There was a $3 million jury award back in 2008, but it was appealed and settled before hearing. No details on the settlement were made available. What’s significant here is that the claim for punitive/aggravated damages is five times the amount claimed for general damages for harm to reputation. So, he’s saying that by virtue of the Defendants’ conduct, which he describes as ‘high-handed, callous, oppressive, and arrogant,’ it warrants punishment. He’s even included some criminal concepts, saying punitive damages will ensure ‘specific and general deterrence’ — which aren’t concepts usually seen in civil actions.”

The claim also argues that “the public should have been alerted” of a “potential conflict of interest” and “increased risk of unfairness to Mr. Bullard” because Mulligan and Boesveld both work for outlets owned by Rogers Media. (Boesveld was among those affected by recent layoffs in Rogers’ publishing division but says on Twitter that she will remain at Chatelaine until next month.)

Bullard also takes exception with Boesveld and Rogers not reaching out to him for comment and not including information from court transcripts and witnesses that he says are “inconsistent with the claims made by Cynthia Mulligan.”

Rogers and Boesveld did not respond to CANADALAND’s requests for comment.

Clarification (August 23, 3:30 p.m. EDT): Due to an editing overstep, this article originally said the suit was seeking $6 million “from each defendant.” More specifically, the claim is “against each defendant, jointly and severally,” which means that the defendants would together be responsible for the entire amount, with each assuming full liability only if the others were unable to pay.