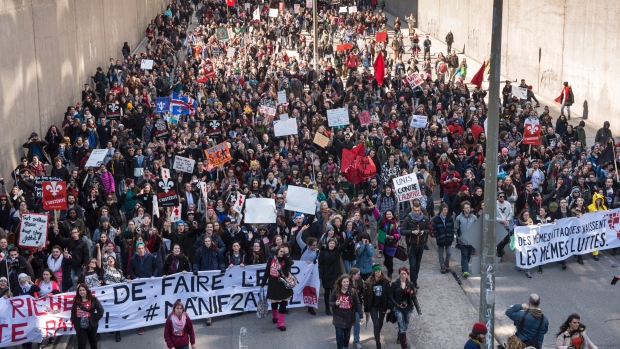 Last Thursday, more than 2,000 and fewer than 76,000 people marched through the streets of Montreal to protest austerity—and that’s as accurate as news reports on the demonstration allow us to be.
News Brief By Jake Bleiberg
Share

Last Thursday, more than 2,000 and fewer than 76,000 people marched through the streets of Montreal to protest austerity—and that’s as accurate as news reports on the demonstration allow us to be.

Media descriptions of the size of the April 2 march by students, trade unionists, professors and others include “a large throng,” “thousands,” “several thousand,” “tens of thousands,” “30 thousand,” “75 thousand” and more. The actual number of people at the demonstration is likely to remain indeterminate, but what is certain is that over or under representing the size of a protest is a disservice to readers and the objective difficulty of crowd counting creates room for subjective biases to seep into honest reporting.

At 12:36 p.m. on April 2, a piece by Quebecor Media Inc.’s wire service Agence QMI ran on the TVA News (also owned by Quebecor) website stating the size of the march as “10,000 to 15,000 people.” Later that day, TVA, which covered the demonstration from overhead in a helicopter, reported that there were 25,000 to 30,000 protesters. This count was not issued as a correction of the earlier, lower range. Rather the two now run side by side; an article titled “15,000 People Against Austerity,” opens with a video of a TVA anchor Pierre Bruneau saying, “there were more than 25,000 people in the streets of Montreal today to protest austerity measures.”

A TVA reporter who covered the protest affirmed the later estimate, but could explain why the conflicting accounts were run together.

Crowd counting is a tricky thing. The ideal method is to use high-resolution photographs that show an entire group and actually count head by head—an impossibility in breaking news reporting. Charles Seife, a professor of journalism at New York University, studies the way reported numbers can be deceptive and said that getting a count becomes much harder when a crowd is moving, and even the best methodologies come with large margins of error.

This challenge is also visible in the reporting of Montreal’s three largest newspapers.

In the body and headlines of two different articles, Le Journal de Montréal offers three approximations of the crowd’s size: “at least 30,000 people,” “about 30,000 people” and “more than 30,000 people.” It also cites the claim made by student organizing group L’Association pour une solidarité syndicale étudiante (L’ASSÉ) that 75 thousand people attended the demonstration. 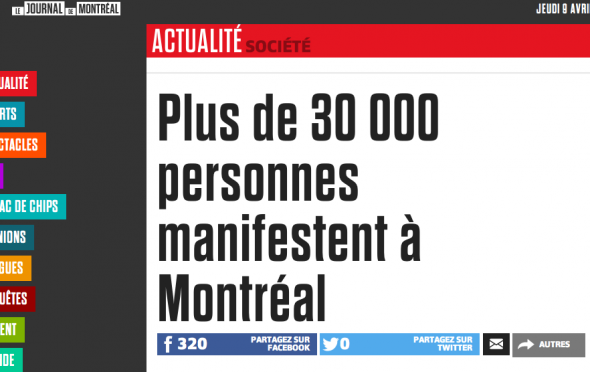 Newspaper La Presse ran a story from The Canadian Press wire service that in its first sentence states, “several thousand people demonstrated” and in its last sentence references L’ASSÉ’s count of 75,000. The CBC took a similar approach, writing about “thousands of people,” but also quoting the organizers estimate.

The Montreal Gazette reporter Monique Muise, a veteran of the 2012 student protests, live tweeted the April 2 march for her paper. She said it is her deliberate policy to offer ranges and approximations rather than more specific counts, and in two tweets and an interview with CANADALAND Musie said that there were tens of thousands of people at the protest.

“Once a crowd is moving, you’re guessing more than you’re basing it on any sort of scientific method,” said Muise. “And at that point it’s more important to be accurate than it is to be precise.”

But tens of thousands is not the language that made it into The Montreal Gazette’s story. Although it embeds more than 80 tweets from Muise and her colleagues, the only description of the protest’s size in the article’s text is “thousands of people.” The headline for the piece is “Anti-austerity demonstration in Montreal draws thousands, UQAM class disrupted.”

Jesse Feith, the reporter who authored the story, did not respond to requests for an interview and Muise did not know what caused this discrepancy. She stood by the accuracy of tens of thousands, but noted that thousands is also accurate.

The tradeoff between accuracy and precision is the inevitable consequence of using approximate language to describe a crowd, but getting an exact count is difficult and notoriously controversial.

In 1995 the United State National Parks Service got into trouble when it issued an estimate stating the Million Man March on the National Mall in Washington, D.C. drew some 400 thousand people. The Nation of Islam organizers gauged the crowd at between 1.5 and 2 million and threatened to sue the Park Service over the lower estimate, which they attributed to government racism.

The Service de Police de la Ville de Montréal does not give out estimates of crowd size. It once did, and regularly had its counts attacked as being both too high and too low.

Charles Seife told CANADALAND that crowd counts can have as much to do with politics as they do with the truth, even when the counter is trying to give an honest estimate.

Ethan Cox, an editor of crowd-funded news outlet Ricochet, said that he fell victim to this effect while covering the 2012 student strikes for rabble.ca, accepting inflated numbers presented by student organizers as accurate out of sympathy for their cause. But Cox was confident that Ricochet’s coverage avoided this pitfall.

In his piece on the April 2 protest Cox mentions L’ASSÉ’s 75,000 and writes, “based on my calculations, that’s a reasonable estimate.” The piece notes that other outlets reported 25,000 people, but suggests that these counts might have been taken before the demonstration peaked. 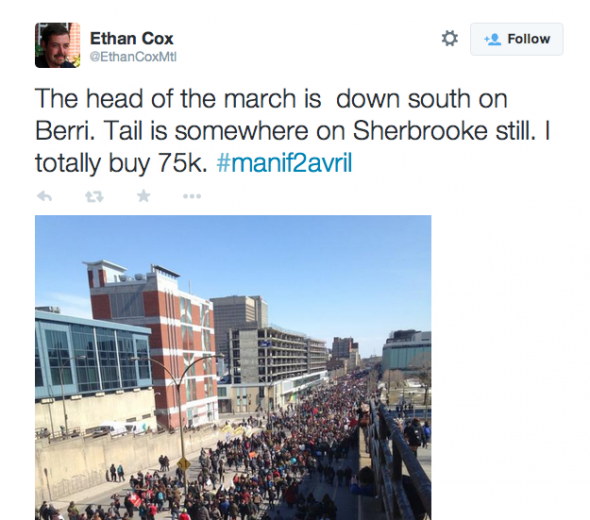 Cox admitted that his methods are no less approximate than anyone else’s and that the march could have been well below 75 thousand, but he was critical of journalist’s inclination to use vague, low-balled estimates to avoid being wrong.

“A protest that’s capable of attracting 2,000 people is fundamentally different, as a news event, from a protest that attracts anywhere between 25,000 and 75,000 people, and if we’re reporting them the same then we’re giving equal weight to things that are not equally supported by our fellow citizens.”