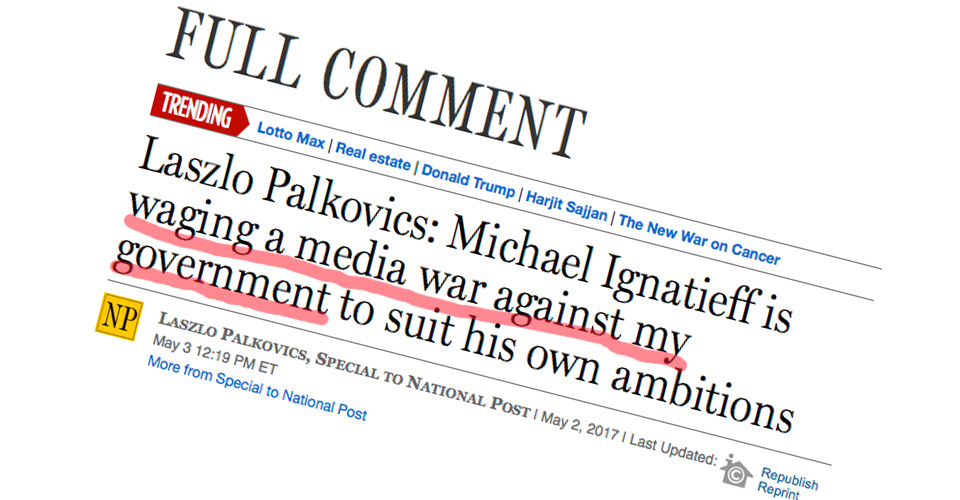 The National Post Published An Op-ed By An Authoritarian Government

On May 2, the National Post published an op-ed by Laszlo Palkovics, the Hungarian Minister of State for Education, who used the column to respond to claims that his government was attempting to shut down Central European University (CEU).

CEU is lead by Michael Ignatieff, the former leader of the Liberal Party of Canada, who became president and rector of the school last May.

“Ignatieff has chosen to inflate what is essentially an administrative question into a pitched political battle,” wrote Palkovics, who also declared that “our government has been explicit that it is not our intention to close CEU or any other universities.”

Jonathan Kay, editor-in-chief of The Walrus and former comment editor at the Post, took issue with the decision to publish the op-ed, calling the Hungarian government “anti-Semitic” on Twitter.

“Whoever decided to run this column was so desperate to smear Michael Ignatieff,” Kay told CANADALAND in an email interview, that “they ran propaganda from a demagogue Hungarian regime that floats dog-whistle anti-Semitism and anti-Soros conspiracy theories as a means to garner political support.”

CEU, a Budapest-based university that offers American diplomas and classes taught in English, was founded in 1991 by George Soros, the Hungarian-American billionaire and philanthropist, after the fall of communism in Hungary. Soros is often vilified by the far right in North America and Europe for his liberal views, sometimes with an anti-Semitic bent.

@kevinlibin @fpcomment Nah. I think I’ll start with asking why you published bullshit from the govt of hungry as cover for their anti semitic Soros consp theories

“Everyone knows the campaign against CEU is a cynical ruse to silence liberals,” Kay wrote to us. “This doesn’t get much attention in Canada because we are more focused on Brexit and [Marine Le Pen] and such, but the situation in Hungary (and Poland) is quite awful.”

Ignatieff has been on CBC’s As It Happens, CNN, Germany’s Deutsche Welle, and elsewhere raising awareness about the situation, which he’s called “a flagrant and discriminatory attack on academic freedom.”

“The claim that Ignatieff is the media aggressor against the poor Hungarian [government] is laughable,” Kay continued. “It’s like a [Canadian] newspaper running a piece by [Le Pen] denouncing Le Monde for victimizing the cause of white nationalism.”

In September, Ignatieff told TVO’s The Agenda that the school was created to “defend society, free markets, free institutions, [and] free minds.”

He believes CEU is under threat from a proposed Hungarian law that would impose regulations on the school that could shut it down — and said as much in a column for the Post published the day after Palkovics’s.

“For three weeks the government has done nothing. Instead of sitting down and talking with us, the Minister of Education, Laszlo Palkovics, prefers to attack the university and its rector in the pages of the National Post.”

Ignatieff argued that the attack on the CEU is an attack on Soros.

“If the government wishes to conduct a vendetta against George Soros, the founder of our institution, CEU cannot stop them, but we have every right to refuse to be taken hostage.”

The Hungarian government is lead by Viktor Orban, an anti-EU proponent of “illiberal democracy” — a term he advanced in a 2014 speech — who has been described as autocratic. He calls himself a defender of “Christian values,” while his administration is often accused of being anti-Semitic and Islamophobic.

Orban has called migrants a “Trojan horse of terrorism,” and his administration detains asylum seekers in prison camps for months while they determine whether they will be accepted into the country.

In October, the Hungarian leader orchestrated a referendum to reject the European Union quota for resettling refugees, which won a large majority but was invalidated by low voter turnout.

In December, Orban stated that “in the coming year, Soros and his forces will be squeezed out.”

Orban has studied at Oxford on a Soros scholarship.