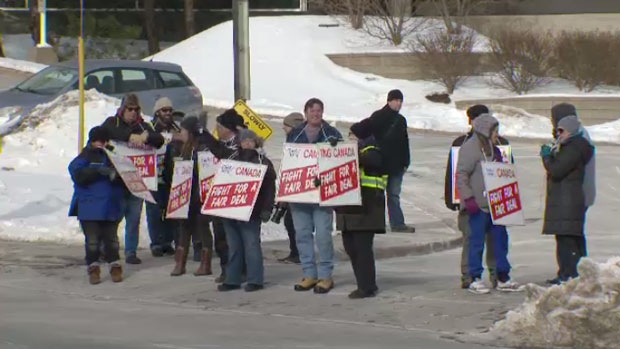 There was a conspicuous absence from the Nova Scotia NDP’s leadership conference this weekend.
By Robert Hiltz
Share

No reporter representing the Halifax Chronicle Herald, the province’s biggest news organ not named CBC, was there to witness Gary Burrill crowned as the leader of the provincial party. They weren’t welcome.

That’s because the party won’t speak to any replacement reporter—”scab,” if you prefer—for the paper while its staff is on strike.

Some social media reports gave the impression that reporters had been banned from the event, but CANADALAND was able to confirm this was not technically the case. The Chronicle Herald didn’t send any journalists, knowing the NDP wasn’t going to be speaking to them.

Michael Gorman is normally the Chronicle Herald’s provincial affairs reporter, but while on strike, he’s writing for Local Xpress. It’s the outlet he was there to cover the convention for and it’s run by the 60-some members of the Halifax Typographical Union while they’re on strike.

In a press release put out in January when the strike began, the party says it won’t speak to anyone from the paper while the strike continues. “During this period the NDP will not participate in interviews with replacement freelance reporters hired by the Herald, nor will it submit press releases or opinion pieces to the newspaper,” the release says.

Gorman says he was on the other end of the NDP policy when workers at the Herald’s printing plant went on strike were locked out a year ago and provincial NDP members wouldn’t talk to him.

“I don’t know that I have any more of an opinion on this policy than I do of a party that passes a policy to be either pro-choice or pro-life,” he says.

However, he does see how things might be different if New Democrats were sitting in the government benches in the legislature. Gorman says he was told by a member of the Liberal premier’s office that, no matter what sympathies they might have, as the government they wouldn’t be turning away requests.

“The NDP in this case is in a fairly unique situation in that they’re not government, so perhaps they view it as being a little more clean and clear cut were they to be in power.”

Messages left with a worker at the NDP’s provincial party office was not returned. Should they be returned, this post will be updated.

DISCLOSURE: A striking member of the HTU is a cousin of mine. We’ve never actually met, but she knows my grandparents well. She answered a message left with the union and put me in touch with Gorman. I did once meet her parents, who were very nice.