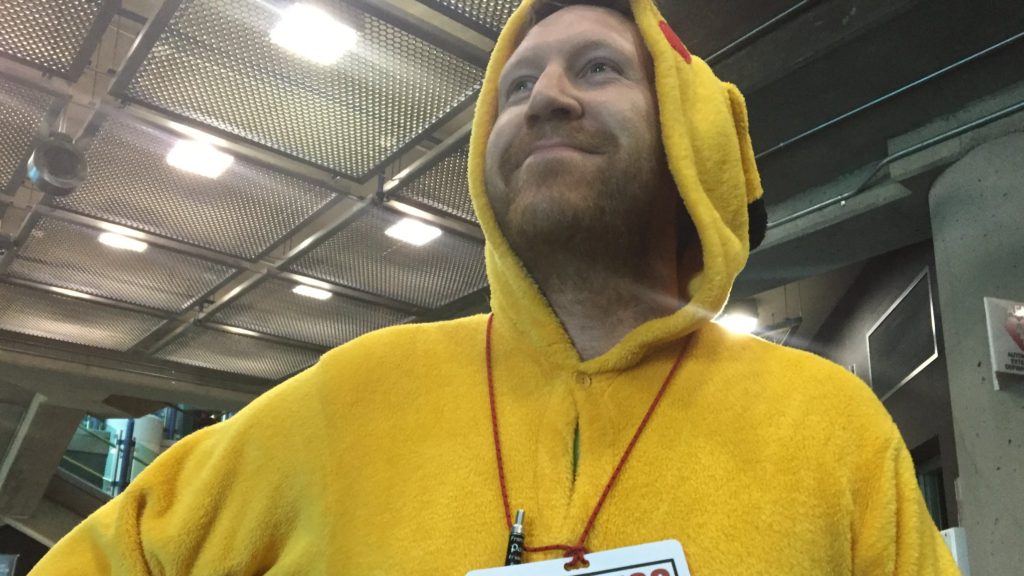 The Newfoundland and Labrador premier’s office has decided that you can’t be a journalist if you’re dressed like a giant Pokémon character.

Jon Keefe wanted to report on a recent press event held by Premier Dwight Ball, and he chose to do so while wearing a Pikachu onesie. Once he was dressed for the occasion, he grabbed a notepad and pen and headed to The Rooms, which houses Newfoundland’s art museum and archives.

“About 20 minutes after the event was supposed to start, a couple of people came downstairs and handed out laminated passes to everyone but me and the guy holding my camera,” Keefe said. “I told them that they forgot to give us our passes; the man, who refused to give his name, told me that the event was for registered media only.”

Curiously, several reporters at the event tweeted that no one had registered for the event.

So the Liberals have barred Jon Keefe from attending the Dwight Ball media availability. #nlpoli

Of note: no reporter from CBC, VICE, The Telegram, NTV or VOCM registered for this media availability. We were all allowed in. #nlpoli

Keefe left, while the rest of the assembled media went to the availability. He had figured he’d receive some pushback, but didn’t expect to be barred entry.

“I figured they’d put up a halfhearted attempt to stop me, but I was actually halfway surprised when they shut me down. I honestly didn’t think they’d be so foolish,” Keefe said.

Despite being denied entry, Keefe isn’t too disappointed. “I was hoping to just watch the press conference like everyone else, but starting a public conversation about the relationship between the media and the government is a decent consolation prize.”

“There are mechanisms in place to deal with disruptors. Barring people because you don’t like their politics isn’t acceptable,” he said.

It’s reasonable to assume the premier’s office doesn’t like Keefe’s politics. While he doesn’t really consider himself an activist, he’s accepted the label in the past. He came to a kind of infamy recently after printing a series of posters with Ball’s face and the “Resign” in bold text. He also produces a broadsheet poster series The Running Mouth, a satirical paper of sorts he’s posted around the legislature in the past few months.

Of course, it’s entirely possible that what they objected to most was not Keefe’s politics, but the fact that he was wearing a giant, furry Pikachu costume.

The Newfoundland premier’s office did not respond to questions from CANADALAND. Should we receive a response, we’ll provide an update.

The decision to pick and choose who is and isn’t a journalist got the NDP government in Alberta in some hot water earlier this year, when reporters from the Rebel were forbidden from attending a budget briefing. The right-wing news site, which is openly hostile to the NDP, gained widespread support from media across the country. Premier Rachel Notley’s government eventually caved to public pressure, reversed their decision and handed over decisions on who to accredit to the legislature’s press gallery.