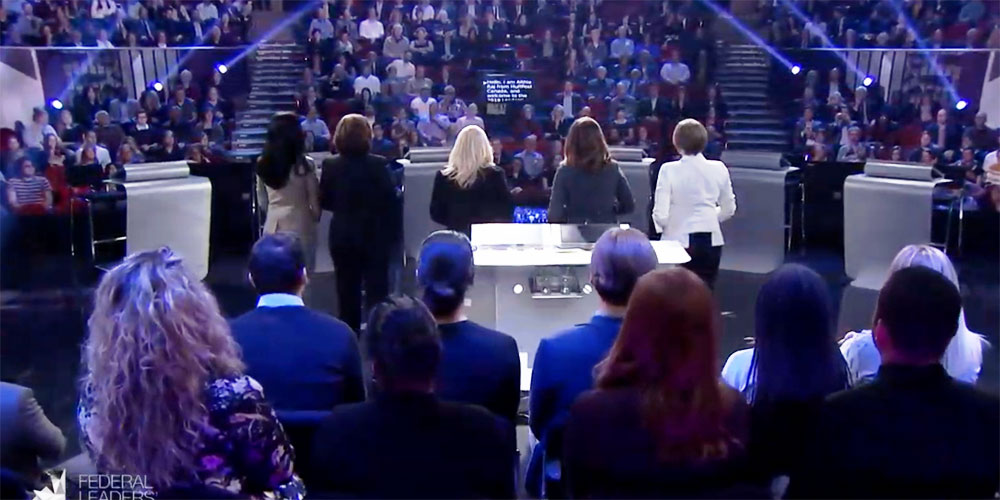 No Indigenous Journalist Among Debate Moderators. Instead, An Offer To Be A Human “Mic Stand.”

At tonight’s federal leaders’ debate, Canadians will watch as candidates face questions from a panel of moderators comprised of no fewer than five accomplished journalists. But despite efforts made by the Aboriginal People’s Television Network (APTN), to ensure that one would be an Indigenous journalist, no such representation will occur.

Instead, representatives from the Canadian Debate Production Partnership (CDPP) visited the network’s Winnipeg headquarters on September 3 to offer a different way for them to be involved. According to Cheryl McKenzie, executive director of APTN News, the partnership instead invited APTN to provide a reporter to hold out a microphone to a “regular Canadian” who would ask a pre-vetted question in the debate’s remote Q&A segment. The offer included no editorial element.

McKenzie says she was insulted and declined the offer, which she says was extended on behalf of the production partnership by Bob Weiers, CBC News’ executive producer of elections and live events. CBC News’ Indigenous unit is a direct competitor with APTN News.

“What’s the substance, in being involved in that way?” she asks in an interview with Canadaland. “We have plenty of work for our reporters to do and not just be a mic stand for somebody else.”

“We decided that we need to invest all of our resources into our own debate production, and not have a reporter there just introducing one person asking a question.”

Additionally, McKenzie says APTN was not consulted on any of the questions that will be asked tonight, including ones in the section dedicated to Indigenous issues.

@Terrilltf is right. Also, APTN lobbied to have one of our journalists on the moderator panel (there are 5 from other media). That was denied for reasons never explained. By the way, the translations and the debate is courtesy of the Canadian Debate Production Partnership.

Asked why she felt it was important for APTN to be involved in moderating the debate, McKenzie tells Canadaland, “It is absolutely about making sure Indigenous issues are represented in the discussion by the people who should be telling these stories.”

“We’ve won a lot of awards in our short history, for our small size,” she says. “I would’ve appreciated something with more substance, given that we are truly a national broadcaster…and journalists with our own integrity. I would have hoped that it’d be a given that they involve APTN News, so I don’t know why they decided not to.”

The CDPP is a consortium of broadcasters that has decision-making powers over who moderates the federal leaders’ debates and which questions get asked. It is comprised of a group of organizations ranging from the Toronto Star and CBC News to Le Devoir and HuffPost Canada. But it does not include APTN, whose role will be limited to broadcasting and streaming the debates, including in a number of Indigenous languages.

Leon Mar, the CDPP’s spokesperson, who works as director of media relations and issues management for CBC/Radio-Canada, did not immediately respond to a request for comment.

Correction (October 7, 2019, at 8:35 p.m. EDT): This article originally stated that APTN would be translating the debates into three Indigenous languages. In fact, APTN is broadcasting and streaming Indigenous-language versions of the debates, but the translations themselves are produced by the production partnership.