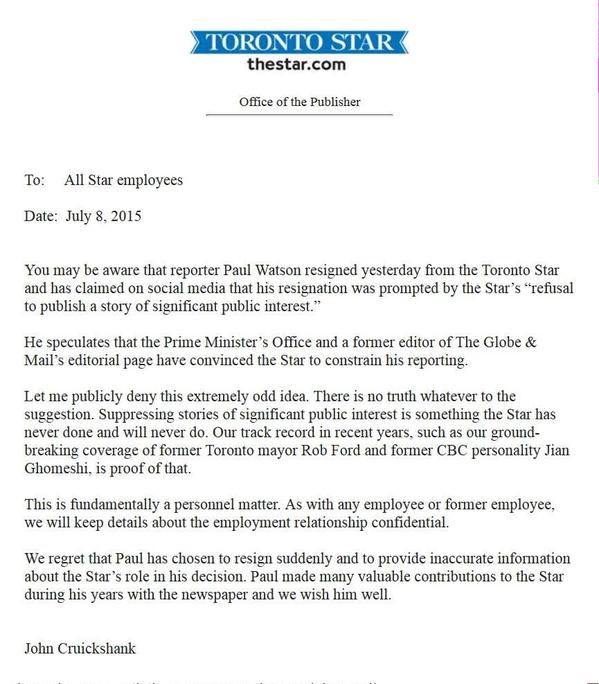 Paul Watson vs. the Toronto Star

CANADALAND has obtained from Paul Watson the full audio of the meeting with Editor in Chief Michael Cook and Executive Editor Paul Woods which prompted his resignation, with permission to post an excerpt. It pertains directly to The Star's official comments on the story.
By Jesse Brown
Share

Journalist Paul Watson alleges that his bosses at the Toronto Star “refused to publish a story of significant public interest.”

CANADALAND has obtained from Watson a full audio recording of his meeting with Editor in Chief Michael Cooke,  Executive Editor Paul Woods and union representative Liz Marzari, which prompted his resignation. He has given us permission to post an excerpt that pertains directly to the Star‘s official comments on the story.

Here is an audio recording made, says Watson, with all participants’ awareness, of EIC Cooke passing on the story:

In the recording, Cooke is heard responding to (what CANADALAND can confirm is) Watson’s summary of the story.

“That was indeed what I thought the story was. I don’t think that’s a story for the Star to engage in.”

Yet in an interview yesterday with The National Post, Star spokesperson Bob Hepburn said there’s “no truth” to Watson’s charge that The Star “refused to publish a story of significant public interest.”

The Star refused to comment to the Post on Watson’s allegation that he was barred from reporting on the Franklin shipwreck salvage expedition for six weeks, and insisted that the paper hasn’t shied away from public interest stories.

“The clip is for your audience to hear because it specifically refutes The Star’s false claim yesterday that I did not resign because/after editors rejected my story of significant public interest. I’m now working hard to finish that story.

People can then judge for themselves whether it was indeed of significant public interest and, therefore, whether The Star should have lifted its six-week reporting ban and let me finish the story.

Instead, as you know, I had to resign and give up a good livelihood to do what’s right.”

Watson writes that he is reserving the full recording for his own reporting.

“…we stand by our statement that there is no truth to the suggestion that the Star refused to publish “a story of significant public interest.”

CANADALAND can provide the following context to the audio clip above:

The full recording provided is of a tense and testy encounter in which The Star editors express their displeasure at having to fly to Vancouver to meet with Watson. They attempt to engage him in a “fact-finding” discussion about unexplained matters not pertaining to Watson’s journalism, in order to determine his future, if any, with their newspaper.

Watson demands to first discuss the Franklin story, saying that his willingness to discuss other matters will depend on their answer to his question: will they “contradict TorStar Chairman John Honderich” and let him report on the Franklin story?

After some argument about which man has been avoiding the other, Michael Cooke asks Watson to summarize the story so far for him. Watson does so. Cooke then passes on the story and Watson angrily ends the meeting, saying to his soon-to-be-former editors:

“…you are both a betrayal to journalism and to the history of this great newspaper”.

At one point in the conversation, management suggests to Watson that stories are killed in the normal course of events in a newsroom all the time. Watson protests, noting that in his experience stories are killed once they are presented as written, and says that never in his career has he ever been asked to stand down while still reporting a story.

Paul Watson takes issue with another aspect of the Star‘s official response.

In a letter yesterday to all staff, Star publisher John Cruickshank wrote that Watson “speculates the Prime Minister’s Office and a former editor of The Globe and Mail’s editorial page have convinced The Star to constrain his reporting.” 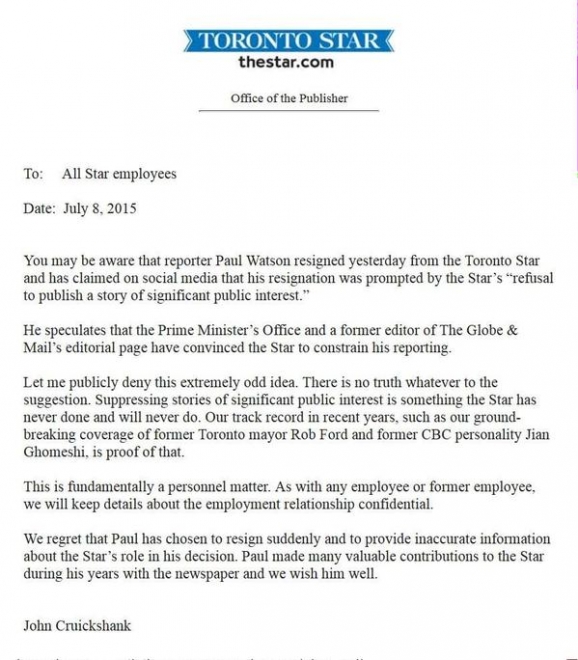 To CANADALAND’s knowledge, Watson never actually suggested this, and he denies that he ever did.

In fact, when government influence on The Star was suggested as a possibility to Paul Watson during his CANADALAND interview, he balked at the notion, saying he would be “shocked” to learn the left-leaning Star took orders from the federal Conservatives.