April 12, 2017
SHARE
THE IMPOSTER
34
Century Egg
Century Egg composes Chinese pop songs by Email. And a war is brewing in the Canadian art world. It's a war of loverz, haterz and haterzhaterz.
Kevin Sexton
Producer
Hosted by Aliya Pabani

Century Egg makes Chinese pop music in Halifax. They just wrapped up a mini-tour of central and eastern Canada. They have a peculiar approach to writing music: River God, the title track off their latest release, was written in 20 minutes, while singer Shane Keyu Song and guitarist Robert Drisdelle waited for their rice to finish cooking. 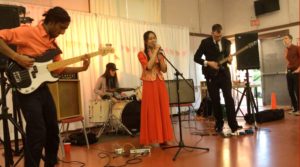 Sholem Krishtalka of Toronto’s infamous critical art zine, Art Fag, reflects on the importance of criticism, and why Canada’s so averse to it. Find his non-Art Fag work on his website.


Music on this episode:

“River God,” “All This Unpleasantness” “Sunshine Realise” and “Day That Didn’t Exist” by Century Egg

“Never Trust a Storyteller” and “Inter-Mission” by Obuxum. Find more of her music here.

More from this series
The Last Laugh
Will Aliya bomb or solve racism with jokes? Find out in this final episode of The Imposter.
Beverly Glenn-Copeland Comes out of the Woodwork
In 1986, an album called Keyboard Fantasies was recorded on cassette in Huntsville, Ontario. It was self-released and barely sold any copies. Recently, the album was rediscovered, shining a spotlight on the incredible catalogue of Beverly Glenn-Copeland.
Is Comedy Art?
The difference between art and entertainment is in the eye of the bureaucrat, and what happens when your punchline is a 15-foot bronze statue of King Edward VII on a horse?
Meet the Porn Auteurs
"My mentor, who's like this 71-year-old retired pornstar from the 80s — she would always say the best porns come from your own personal sex life"
The Sun Never Sets on Abtec Island
A shoot 'em up game that runs on emotions and an Indigenous island that runs on memory.
The Patron Saint of Comics
A hagiography of celebrated publisher Annie Koyama.
No, However…
Improv’s about saying “yes, and...” to everything. It’s about building a limitless environment for playful and absurd moments to surface organically—but when your boundaries are crossed, how do you push back?
Aliya Does Improv
Saying yes to everything is an excellent approach to improvisation, but it's a terrible idea in life. So what happens when worlds collide?