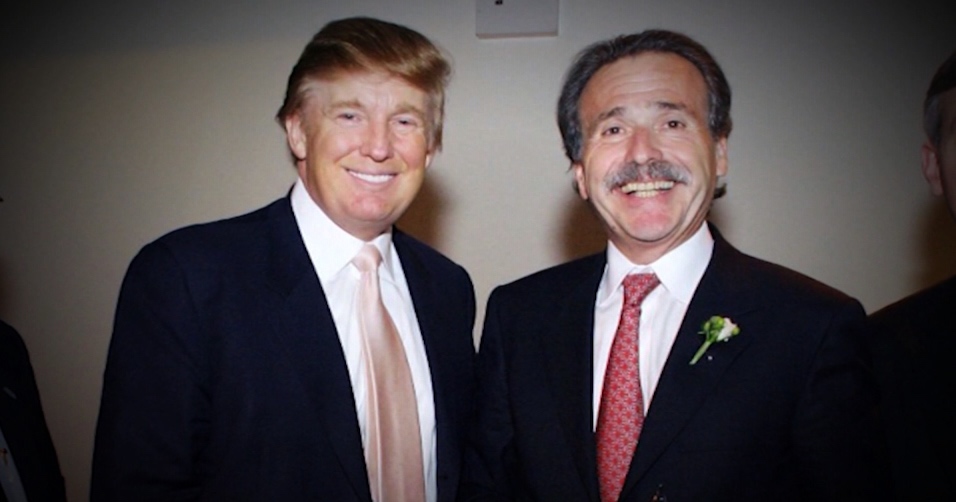 David Pecker has been accused of wielding the National Enquirer to protect friends including Trump and Harvey Weinstein. He also helps decide how much Postmedia execs should get paid.
Article By Robert Hiltz
Share

David Pecker heads up the most infamous tabloid in the United States, the National Enquirer. His company, American Media Inc. (AMI), reportedly pays people who have potentially damaging stories about his friends so those stories never see the light of day. He’s courted investment from the brutal regime of Saudi Arabia for a shot at adding Time magazine to his stable of publications. And his communications with Michael Cohen, Donald Trump’s longtime personal lawyer, were specifically sought by the FBI in a search warrant executed on Cohen’s office this past April.

One more thing about Pecker: Since October 2016, he’s been a director of Postmedia, sitting on the board of this country’s largest newspaper company.

Postmedia owns daily newspapers in every major city from Montreal to Vancouver, as well as a broad smattering of smaller dailies and weeklies through the rest of the country — but it’s a business in dire straits, having struggled under a massive debt load since springing from the bankruptcy of Canwest in 2010. As a publisher, it’s in a tough spot, and it’s unlikely the presence of Pecker — who earned $117,500 from just his first 11 months on the board — is a positive one for a company looking for assistance from an already reluctant Liberal government.

“I don’t talk about any of my directors,” Postmedia CEO and executive chairman Paul Godfrey says, when asked about Pecker and whether he was concerned by the FBI search. The company’s VP of communications also declined to answer a list of questions, instead referring CANADALAND to the director biographies on the company’s site.

As the head of AMI — the august publisher of such titles as the National Enquirer, Us Weekly, Men’s Journal, and Radar Online — Pecker is perhaps best known right now not for what his titles have published, but for what they haven’t.

According to a sprawling New York Times profile of the media and legal machine that kept Harvey Weinstein’s predatory behaviour under wraps, Weinstein was widely known as an “F.O.P.” — a “Friend of Pecker.” This meant, according to the Times, AMI would try buy up the exclusive rights to stories and then bury them. Other times, AMI would dispatch reporters to dig around stories, then pass that information on to Weinstein.

“To the extent AMI provided ‘off the record’ information to Mr. Weinstein about his accusers [it did so] at a time when Mr. Weinstein was denying any harassment,” the company told the Times in a statement. (Weinstein has since pleaded not guilty to two counts of rape and one count of a criminal sex act.)

AMI has also made multiple payments to people with stories about infidelity on the part of U.S. President Donald Trump, but has not run those stories. In late 2015, a $30,000 payment was made to a doorman at Trump Tower who claimed to have heard a story about a child Trump had with another woman in the 1980s during his first marriage. The Enquirer’s editor told Radar the paper did not, in the end, find the doorman’s story credible, which is why it wasn’t published.

Another, much larger payment was made even closer to the 2016 U.S. presidential election, according to The New Yorker — of $150,000 to former Playboy playmate Karen McDougal, who said she had an affair with Trump in the mid-2000s. The payment gave AMI the exclusive rights to market McDougal’s story, and she would also get a column and other media exposure in AMI publications. But the story of Trump’s possible affair wasn’t printed in any AMI publication; instead, it was broken elsewhere. In March, McDougal sued AMI to be released from the contract. In a statement announcing a settlement the following month, the company acknowledged the agreement but said it had already been amended in 2016, allowing McDougal to speak freely about her relationship with Trump; AMI still retains a cut of the rights to her story should she ever sell it elsewhere.

The payment to McDougal is now part of a U.S. federal case in New York where Trump’s former lawyer Michael Cohen is being investigated for possible bank fraud and campaign-finance violations, among other things. According to news reports, correspondence regarding payments to AMI are part of what federal prosecutors are looking to use as evidence in their investigation. On Wednesday, The Wall Street Journal reported that prosecutors had also served a subpoena on AMI for any documents connected to the McDougal payment. “Phone records show that Messrs. Cohen and Pecker were in frequent contact around the time of the negotiations with Ms. McDougal,” the Journal wrote, citing a source familiar with the matter.

A former AMI editor also told CNN that executives would squash negative stories about Trump. “I’ve talked to reporters that I worked with and that worked with other editors on [Trump] stories that told me they had to run it [whatever they were reporting] by the Trump Organization,” the editor told CNN.

Pecker also sits on the committee of Postmedia’s board that makes recommendations on executive compensation, which puts him at the centre of another of the company’s public struggles. In the last few years, Postmedia executives have received large retention bonuses, reaching into the millions of dollars, only for several of them to leave the company soon after. Over the same period, dozens of Postmedia employees have been laid off or taken buyouts.

In Postmedia’s 2017 fiscal year, Pecker attended all nine meetings of its board of directors, and another five meetings of the Compensation and Pension Committee, according to public filings [pdf].

Pecker was appointed to the board in 2016 by Chatham Asset Management, a New Jersey firm that holds a large equity stake in Postmedia and majority ownership of AMI. A pair of Chatham executives also sit on AMI’s board. (AMI’s other owners are Pecker and hedge-fund manager Leon Cooperman, the latter of whom was the only person to ask a question during Postmedia’s most recent quarterly earnings call.) A request to Chatham Asset Management for comment wasn’t returned, nor was a request sent to AMI.

The one and only question asked during the Postmedia earnings call was a meditation on death and regret, from billionaire Leon Cooperman of NYC-based Omega Advisors: pic.twitter.com/UAGeqEN06o

Pecker’s relationship with Chatham, and Chatham’s ownership of AMI, puts him in a position of possible conflict of interest, Postmedia’s own filings say.

“Chatham’s combined debt and equity holdings, along with Mr. Pecker’s [relationship] with Chatham, and … Mr. Pecker’s position as Chairman, President and Chief Executive Officer of American Media, Inc., a subsidiary of Chatham … may give rise to a potential conflict of interest.”

When he was appointed to the board, Pecker credited Chatham’s investment in AMI with giving him breathing space to transition to digital, according an interview with the Toronto Star at the time.

“They gave me enough air cover where I could invest in digital; before, I could not get my former private equity partners to invest in digital,” Pecker said to the Star. “And over the last four years, I was able to grow my digital revenue from $10 to $50 million, and that helped me to offset my further decline in print revenue.”

AMI declared bankruptcy in 2010 and was forced to restructure because it had debt seven times as high as its equity, according to a Times report. Four years later, it was bought by a pair of hedge funds, including Chatham.

Postmedia was created when Canwest declared bankruptcy in 2010 and sold the newspaper parts of its business to a group pulled together by Godfrey and headed by the U.S. hedge fund GoldenTree Asset Management. Chatham gained its interest in Postmedia in 2016.

AMI was recently looking to obtain investment cash in Saudi Arabia to scrape together a bid for Time magazine, according to a recent New York Times report. AMI went so far as to print a glossy propaganda magazine in advance of a crown prince’s U.S. visit, and Pecker brought a French businessman known for his deep financial connections with the kingdom to the White House for a private dinner with the president. The deal fell through when the owners of Time were unwilling to sell to Pecker, the report said.

David Pecker would be a brilliant choice as CEO of TIME Magazine — nobody could bring it back like David! http://t.co/lLMjQh2iz9

Of course, AMI — whose stable just expanded to include In Touch and Life & Style — isn’t just known for its high debt and ability to navigate the transition from print to digital.

The National Enquirer, AMI’s flagship publication, exemplifies the particular type of outlet many people think of when they think of tabloid journalism: salacious, gossipy, and one might say a bit loose with objective reality. And Pecker is unusually active in his publication’s operations for a resident of the c-suite. Every week, Pecker is in the room picking cover photos and headlines for the Enquirer, according to a 2017 profile in The New Yorker.

In the old Star interview, Godfrey said Pecker was brought on to Postmedia for his business advice and had no influence over day-to-day operations.

But old interviews are all we have to go on. Unfortunately, those interviews are from before AMI was implicated in multiple hush-money scandals swirling around the current U.S. president.

No matter. In January, Pecker was re-elected to the Postmedia board for another one-year term.

Robert Hiltz worked for Postmedia, twice, between 2011 and 2015 as an editor and reporter.

Updated at 9:49 p.m. EDT on June 20, 2018, to include information from the new Wall Street Journal report concerning the subpoena served on AMI.