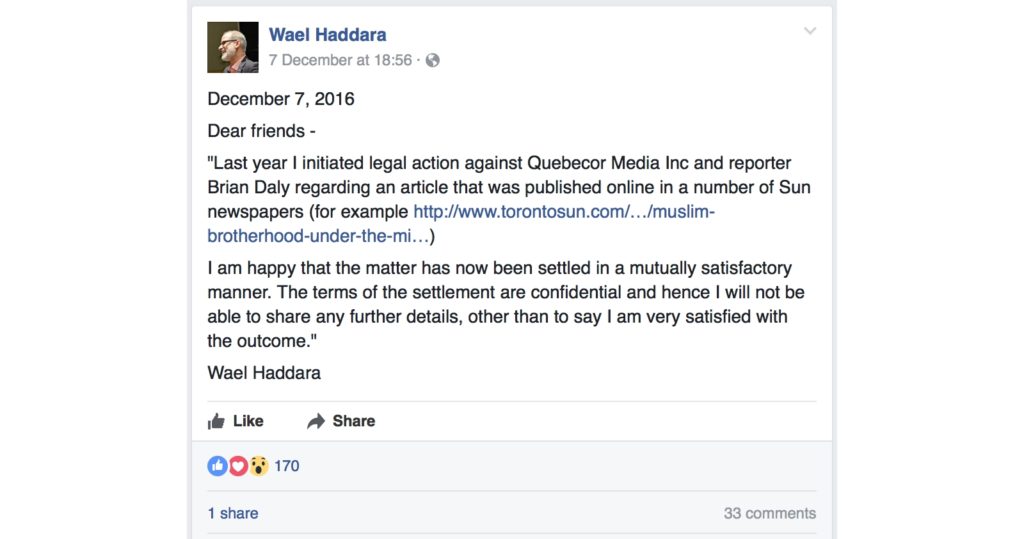 Postmedia has removed a story about the Muslim Brotherhood’s ties to Canada from its SUN websites after settling a lawsuit.

In a statement posted to Facebook, Wael Haddara, a London, Ont. man briefly mentioned in the story, said he sued reporter Brian Daly and Quebecor Media Inc. over an article headlined “Muslim Brotherhood under the microscope in Canada.” The SUN papers were bought by Postmedia from QMI in 2015.

A link Haddara provided to the story leads to an error page on the Toronto SUN website. The story also appears to have been removed from other Sun papers. There is no retraction, correction, or any other sign of what was once published there, or why the link has gone dead.

“I am happy that the matter has now been settled in a mutually satisfactory manner. The terms of the settlement are confidential and hence I will not be able to share any further details, other than to say I am very satisfied with the outcome,” said Haddara, a former advisor to deposed Egyptian president Mohamed Morsi who lives in London, Ont.

When reached for further comment, Haddara said his Facebook statement was all he could say on the matter.

While the Brotherhood story can no longer be found on the Sun’s websites, CANADALAND was able to access a copy in Google cache. It focuses on an investigation by Daly into the Muslim Brotherhood’s fundraising activities in Canada. (The whole story can be read at the bottom of this post.)

Haddara wasn’t mentioned in the body of the story, but was listed at the end in a section titled “Other figures in Canada linked to the Muslim Brotherhood”:

The whole story, as retrieved through Google cache:

Muslim Brotherhood under the microscope in Canada

MONTREAL — The federal government is coming under increased pressure to declare the Muslim Brotherhood a terror outfit, as more evidence piles up that the group has tentacles in Canada.

Its two main offshoots, Hamas and Egyptian Islamic Jihad, are listed as terrorist organizations in Canada.

The last Canadian organization to be added to the list is the alleged Hamas fundraiser IRFAN-Canada, which has worked closely with the Brotherhood, according to an RCMP warrant.

A source tells QMI that the Brotherhood itself, long considered the ideological godfather of Islamist terrorism, has also been under close watch by security officials.

A QMI investigation found that top Brotherhood leaders have lived in Canada for decades. They have led pro-Sharia organizations and sent money and resources to groups that the RCMP and the Canada Revenue Agency say are owned or controlled by Hamas.

Brotherhood-linked facilities have invited extremist speakers to Canada who defended child suicide bombers, amputation for thieves and stoning for adulterers.

A U.S. terror financing trial heard a secret Brotherhood plan for North America calling for a “grand jihad in eliminating and destroying the Western civilization from within and sabotaging its miserable house.”

Stockwell Day, who served in Stephen Harper’s cabinet for five years, tells QMI that Islamist ideology is being propagated in Canada by Brotherhood “sympathizers.”

“The government really has to drill down and look at statements from the Brotherhood,” the former public safety minister said from Vancouver, where he works as a consultant.

“If they find in fact that there’s a preponderance of evidence that shows that they are actively promoting, encouraging, glorifying, killing of Canadians … then they should be labelled as a terrorist group.”

Coptic Christians, whose churches have reportedly been torched by Muslim Brotherhood backers in Egypt, asked the Harper government last year to ban the Brotherhood.

School teacher Hassan Al-Banna founded the Brotherhood in Egypt in 1928, calling for a global Islamic caliphate.

Its intellectual leaders have gained worldwide renown as preachers, scholars and activists but Brotherhood supporters also have a long history of violence dating back to the 1948 assassination of Egyptian prime minister Mahmud al-Nuqrashi.

The Brotherhood creed, shared by Hamas, is: “Allah is our objective, the prophet is our leader, the Qur’an is our law, jihad is our way, dying in the way of Allah is our highest hope.”

While Brotherhood analysts say the group is unlikely to launch attacks on Canadian soil, there’s evidence the group is spreading extremist messages in Canada, aside from its alleged financing of terror abroad.

The Brotherhood lists ISNA U.S.A. as one of its 29 key North American affiliates. While ISNA’s Mississauga, Ont., office claims to be independent from the Indiana-based umbrella group, it shares board members both past and present with ISNA U.S.A., as well as a name and a logo.

A book advocating Palestinian terrorism and suicide bombings was displayed at the ISNA-owned Muslim Community of Quebec mosque in Montreal.

One of them, Dr. Jamal Badawi of Halifax, is a noted Muslim scholar, speaker and television host. His name appears three times in evidence at the Holy Land trial, the largest terrorist financing case in U.S. history.

Badawi has publicly preached nonviolence and tolerance. However, a compilation of his teachings on jamalbadawi.org makes it clear he believes establishing an Islamic state is a duty for Muslims.

“The Qur’an is full of indications that are direct, indirect, explicit, implicit that show without any shred of doubt that the establishment of Islamic order or rule is mandatory that Muslims must establish,” the website reads.

QMI Agency reached Badawi at his Halifax home, at the same phone number listed in the Brotherhood directory tabled at the Holy Land trial.

He insisted his links to the Brotherhood are “a myth” and that “there’s no Muslim Brotherhood in Canada.”

The longtime Haligonian described his own views as “no fanaticism on one side or no looseness on the other side.”

The Prime Minister’s Office wouldn’t name the Muslim Brotherhood when asked for its official position on the group.

“Our government is taking strong action to protect law-abiding Canadians from those who wish to harm us,” PMO spokesman Jason MacDonald said in an e-mail. “The Criminal Code terrorist entity listing process is an important tool in preventing terrorist attacks from being carried out.”

OTHER FIGURES IN CANADA LINKED TO THE MUSLIM BROTHERHOOD:

Aside from IRFAN, two other Canadian charities with links to the Muslim Brotherhood have had their status revoked, or been denied charity status:

DISCLOSURE: Wallace was my boss for a time at Postmedia’s Editorial Services in 2014. We got along well enough, and he even gave me, and everyone else in the building, a raise one time.