Their recent performance in office and at the hustings subject to widespread media and voter skepticism, incumbent Premier Jim Prentice and the Alberta Progressive Conservatives nonetheless managed to secure the endorsement of the four largest papers in Alberta, the Edmonton Journal, Calgary Herald, Edmonton Sun and Calgary Sun. In one case, instruction to endorse came from the papers' parent company, Toronto-based Postmedia.
News Brief By Sean Craig
Share

Tomorrow, Albertans will elect their next provincial government. For over a week, polls have consistently shown the Progressive Conservatives, who have held power in the province for over four decades, trailing the Alberta NDP and the Wildrose Party.

The Progressive Conservatives and their leader have had a rough go this election, with public backlash against an early vote call, allegations of corruption, a poor debate performance by their leader, and cheeky vandals making candidate Jonathan Denis’ campaign signs to read “Jonathan Penis” all drawing unwanted attention.

Their recent performance in office and at the hustings subject to widespread media and voter skepticism, incumbent Premier Jim Prentice and the PCs nonetheless managed to secure the endorsement of the four largest papers in Alberta, the Edmonton Journal, Calgary Herald, Edmonton Sun and Calgary Sun.

After the Herald‘s endorsement, reporter Jason Markusoff was quick to note that staff learn of editorial board decisions at the same time as the public. 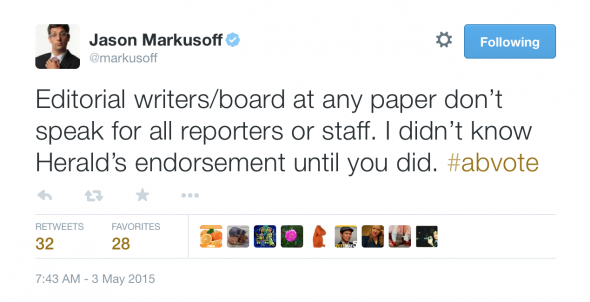 The National Post‘s Jen Gerson suggested that newspapers endorsing the PCs were risking their own credibility with readers.

And Paula Simons of the Edmonton Journal wrote a Twitter essay with strong criticisms of her paper’s endorsement and counterarguments in favour of Prentice’s opponents. Simons also says she was told the Journal would not be endorsing anyone in the election, and so the decision took her by surprise.

The Journal is owned by the Toronto-based Postmedia, who also own the Herald and recently acquired the Edmonton Sun and Calgary Sun when it bought Sun Media. Postmedia is headed by CEO Paul Godfrey, a very public and active conservative, who personally endorsed Patrick Brown in his ongoing bid to lead the Ontario PCs. 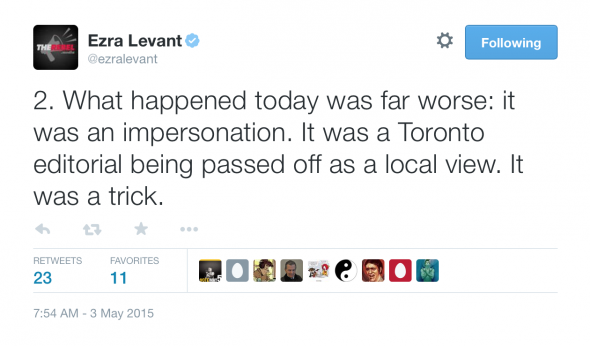 Margo Goodhand, the editor-in-chief of the Edmonton Journal confirmed that the paper was indeed asked to endorse by its ownership:

“The Edmonton Journal has enthusiastically endorsed political parties for more than a century — it’s a longstanding tradition for newspapers, and reflects the opinion of the owner/publisher. Personally, I believe the tradition is outdated and paternalistic, and publicly wrote that in the Journal last year. We did not endorse a particular candidate in the civic election, for example. But — apart from my own personal opinion on this — there has never been a policy on endorsements, and in fact there have been many endorsements. I also know many editors and publishers who disagree with me on this. To not choose a candidate or party is cowardly, I’ve often heard, and an abrogation of duty. Prior to my arrival here, the Journal apparently chose not to endorse in the provincial election of 2012. This year, we were asked to endorse.”

As to who chose the PCs, Goodhand confirms again that it was the paper’s ownership:

“The owners of the Journal made that call, and the editorial was written by a member of the editorial board. It was reviewed and edited by senior Journal editors, and then published as is. Editorials are always expected to reflect the opinions of the owner/publisher. In this day and age, they rarely are, however, but it depends on the publisher. Some are more vested in the paper’s opinion than others. Endorsements in particular are widely misunderstood by most readers, who expect columnists to have opinions, but not the paper itself. And when that viewpoint is not shared, it becomes even more ‎contentious.”

Goodhand added that the Journal is today publishing dissenting views and criticisms of the endorsement from readers. The Journal – and all Postmedia properties in Alberta – have reported quite fairly during the election, including this piece on the financial ties between the PC party and five CEOs who held a press event where they warned against the NDP’s “amateur” policies.

It is not out of the ordinary for a newspaper publisher or owner to have a role or say in editorial endorsements during elections. However, the concentration of Canadian newspapers brought about by Postmedia’s acquisition of Sun has the potential to restrict the diversity of viewpoints exhibited in Canadian media.

On the other hand, it is unclear as to whether or not newspaper endorsements have any influence on electoral outcomes at all.

The editors of the Calgary Herald, Calgary Sun, and Edmonton Sun did not reply to requests for comment. Postmedia did not provide comment.