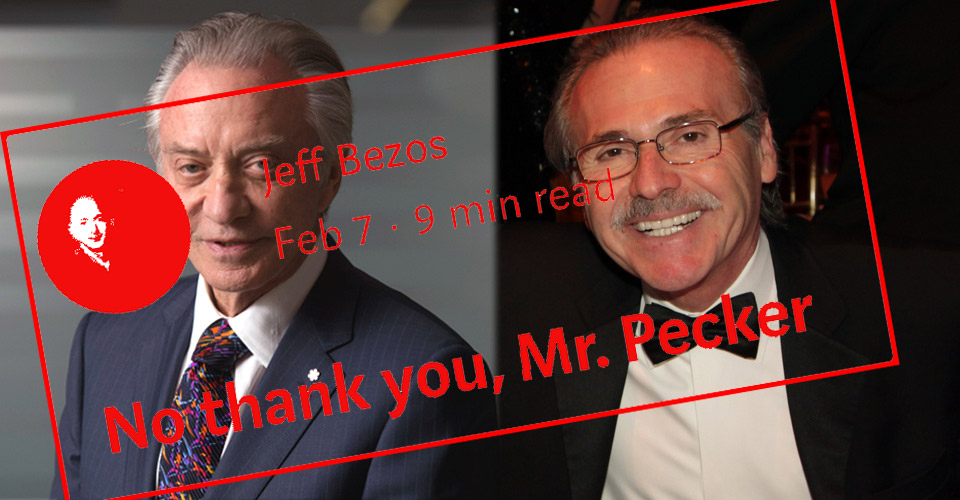 While the head of American Media Inc. may no longer sit on the board of Postmedia, Canada’s largest newspaper publisher still has several connections to the company that Jeff Bezos and others have accused of engaging in explicit extortion. They include shared ownership, syndication of content, and a remaining board member who works with AMI.

David Pecker, AMI’s CEO, resigned from Postmedia’s board in August of last year, after it was revealed by The Wall Street Journal that he and his company had been granted immunity from prosecution for cooperating with U.S. authorities in an ongoing investigation of President Donald Trump. That immunity agreement may now be in jeopardy.

Thursday evening, Amazon founder and mega-billionaire Jeff Bezos exposed an apparent plan by American Media Inc. — which publishes the National Enquirer and other titles — to head off private investigators Bezos had hired to find out how several of his sexts had ended up in the hands of the company. In a Medium post published by Bezos, titled “No thank you, Mr. Pecker,” he alleged that AMI’s chief content officer and general counsel had threatened to release further intimate images if he did not comply with their demands.

“In the AMI letters I’m making public, you will see the precise details of their extortionate proposal: They will publish the personal photos unless [my private investigator] Gavin de Becker and I make the specific false public statement to the press that we ‘have no knowledge or basis for suggesting that AMI’s coverage was politically motivated or influenced by political forces,’” Bezos wrote. He suggested such forces have included not only Trump but also potentially the government of Saudi Arabia. Bezos owns The Washington Post, which has been investigating the death of its columnist Jamal Khashoggi.

AMI maintains it has behaved lawfully and will investigate Bezos’s claims.

So sorry to hear the news about Jeff Bozo being taken down by a competitor whose reporting, I understand, is far more accurate than the reporting in his lobbyist newspaper, the Amazon Washington Post. Hopefully the paper will soon be placed in better & more responsible hands!

After Bezos’s revelations went public, a number of other reporters and editors said that they too had been threatened in various ways by AMI to stop looking into the company and its practices. A New Yorker reporter, the editor-in-chief of The Daily Beast, and a former Associated Press editor all said on Twitter they had been warned of possible retaliatory measures by AMI because of their reporting.

I and at least one other prominent journalist involved in breaking stories about the National Enquirer’s arrangement with Trump fielded similar “stop digging or we’ll ruin you” blackmail efforts from AMI. (I did not engage as I don’t cut deals with subjects of ongoing reporting.) https://t.co/kHQdWIkVjV

All the while, Canada’s biggest newspaper company has continued its direct and indirect relationships with the company.

Part of that would be hard to untangle. AMI and Postmedia have mutual owners in Chatham Asset Management and billionaire Leon Cooperman. Chatham, a New Jersey-based hedge fund, owns about 66 per cent of Postmedia shares [pdf], and about 80 per cent of AMI. This is possible under Canadian media-ownership rules that limit foreign investment, because Postmedia issues non-Canadian shares that have their voting power capped at 49 per cent, no matter how much of the actual ownership they represent. Cooperman, himself an NJ-based hedge-fund manager, meanwhile owns 14 per cent of Postmedia and a reported 7 per cent of AMI.

But it’s not just ownership where the two are linked. Postmedia newspapers such as the National Post, Montreal Gazette, and Vancouver Sun also run online stories and content credited to AMI, usually in their celebrity sections. Some recent articles with the “American Media Inc.” byline include “Kristen Stewart embroiled in lesbian love triangle” and “Kate ‘incredibly bothered’ by Meghan’s ‘over-the-top’ wedding.”

Despite having a number of in-house reporters — including the intrepid Joe Warmington — doing local reporting, the Toronto Sun also ran an AMI story (“Business rivalries behind billionaire Shermans’ murder?”) that detailed the assertions of an “insider close to the investigation” who believed that Barry and Honey Sherman were killed by business rivals out for revenge.

According to a Postmedia spokesperson, the company does not have a content arrangement with AMI but publishes stories from RadarOnline, one of AMI’s publications; she says she did not have exact details of how that works.

Still on the Postmedia board is Daniel Rotstein, who was appointed by Chatham in 2016 at the same time as Pecker. According to his biography on the Postmedia site, Rotstein “provides human resources, risk management, and administrative consulting services to companies in various industries, including American Media, Inc.” Before that, he was AMI’s executive vice president of HR and administration.

After Pecker resigned from the board, he was replaced by John Bode, who has Chatham connections of his own. Bode had given consulting advice to Postmedia though a firm associated with Chatham, according to a Postmedia public report [pdf]. Bode stopped consulting for the company in August of 2018, the same month Pecker exited the board. He was appointed to Postmedia’s board two months later.

On Friday, the Associated Press reported that federal prosecutors are investigating whether the emails posted by Bezos constitute a breach of the company’s co-operation agreement, which allowed them to avoid prosecution for alleged campaign violations. The agreement requires that they refrain from committing crimes for three years.

Sadly, I was only able to Scrawler-style photograph the back of David Pecker’s head. pic.twitter.com/1Q4KphzlR7