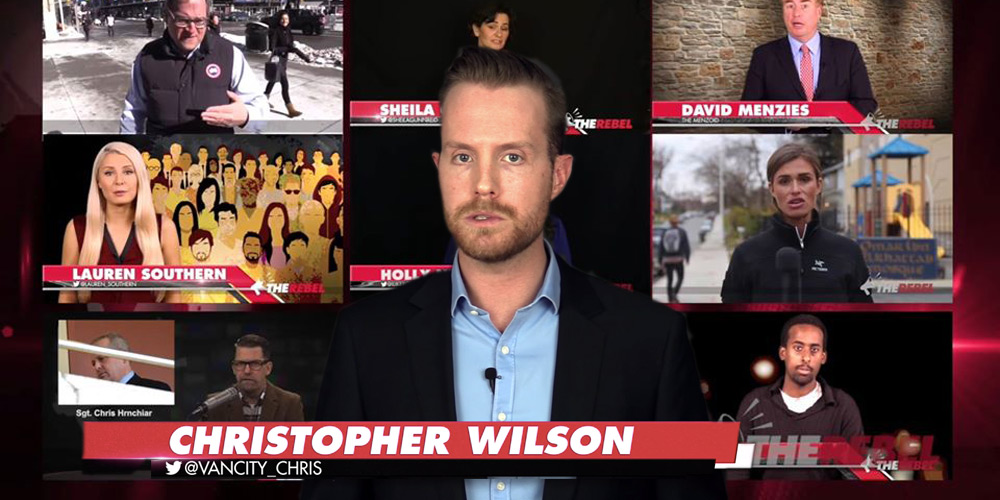 Rebel’s Ex-B.C. “Correspondent” Elected To Board Of Mainstream Political Party

"I stand by everything I said," says Christopher Wilson, once part of The Rebel team alongside Faith Goldy, Gavin McInnes, and Lauren Southern
News Brief By Darryl Greer
Share

Christopher Wilson, the former “B.C. bureau chief” for Rebel Media, has been elected for a two-year term to the board of directors of Vancouver’s once-dominant civic party, the Non-Partisan Association (NPA).

At its annual general meeting last week, the right-wing municipal political party elected 10 members to its board of directors for terms ranging from one to three years. Wilson, reached Wednesday morning through his family’s West Vancouver-based tutoring business, declined to comment on his election to the NPA board or his past work with The Rebel.

“I’m no longer a rebel,” Wilson told Canadaland. “I’m not publicly commenting because that’s against party rules, so you should’ve done your research. I haven’t been with The Rebel for many years now.”

Wilson’s LinkedIn page describes him as a “strategist” who was with the Rebel for two years and eight months, first as a “correspondent,” then as “B.C. bureau chief” until December 2017.

“I have no comment on that as well, because I’ve moved on and I’m in the middle of a workday here so I’m just going to have to end this call,” he said. “I stand by everything I said. It’s all public record, and I really have no other comment, so take what you want from my public comments and my time at Rebel, but I have no comment about my NPA membership or my NPA election or anything like that because only the president of the party comments on that, so I’ll leave you to your story.”

Wilson made headlines in November 2017 after facing a public rebuke from then-Environment Minister Catherine McKenna over The Rebel’s use of the “Climate Barbie” epithet, which he falsely denied ever having used. Wilson parted ways with The Rebel not long after, and has since inserted himself into municipal and provincial politics, also listed as a director-at-large of the B.C. Conservative Party.

While Wilson’s family business biography notes he has a background in “video journalism and political commentary,” his bio from his days with The Rebel touted his extensive writings on “resource development in BC, advocating for pipelines, LNG development, mining, the site C dam, and the oil sands.”

Wilson’s offerings while at The Rebel included a petition to remove Vancouver’s bike lanes, as well as an impassioned defence of Donald Trump’s reaction to racist violence in Charlottesville, Virginia, before airing a clip of a “glorious Trump versus the fake news media press conference.”

“I condemn and disavow the alt-right and their violent, racist actions on Saturday in Charlottesville, Virginia, and so does President Trump,” Wilson stated in the video’s opening. “Is it so wrong to acknowledge what was in plain sight on Saturday? Radical left-wing antifa using black bloc tactics and committing acts of violence as they seem to have been doing non-stop since at least Trump’s election if not even further back into the Republican primary.”

During the Conservative leadership campaign, Wilson nodded along in agreement during an interview with failed candidate Kellie Leitch, describing her as the “Canadian values candidate” whose platform was subject to “smears and attacks” of opponents at the CBC and Liberal Party.

In February 2018, PressProgress reported that Leitch’s campaign had paid the Rebel more than $56,000 for “social media.”

But before joining The Rebel, Wilson also took to Facebook, posting articles such as “Niqab Nightmare,” authored by “Holocaust revisionist” David Cole, commenting that the piece was a “must read article on the Niqab and its place in Canadian politics right now.” Party officials declined comment on Wilson when contacted by Canadaland via email.

“The new Board has not met as of yet, but they will be meeting very soon. They will elect a president from among themselves to speak for the Board and the NPA,” Patrick O’Connor stated in an email. He said he would arrange for the new president to get in touch following their inaugural board meeting this week.

Although it has been more than a decade since Vancouver has had an NPA mayor, the party remains important in the city’s politics, with its members holding five of the 11 council seats, more than any other party. The NPA’s board of directors played a significant role in last year’s municipal election, when it disqualified one of its own councillors from seeking the party’s mayoral nomination; the councillor then ran for mayor under the banner of a new party, earning enough support to have potentially affected the outcome of the race, which the NPA’s candidate lost by fewer than 1,000 votes.