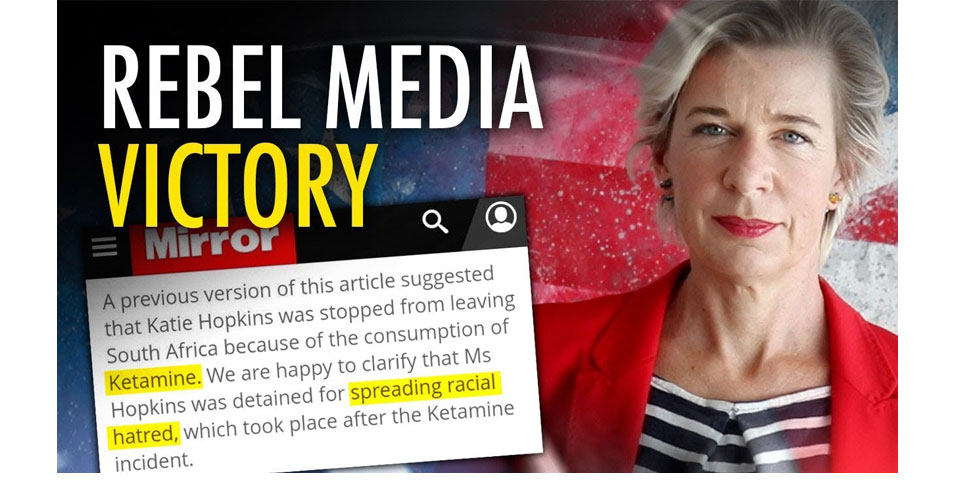 Brit Katie Hopkins once seemed dismayed by the presence of Black people in Toronto.
News Brief By Jonathan Goldsbie
Share

Tracking departures from The Rebel could be a full-time job. It used to be ours, in fact, until we realized that following the comings and goings of minor personalities at a far-right website was neither an especially healthy nor productive way to live one’s life.

But here’s one worth noting: Katie Hopkins is gone.

Though first spotted by Right Wing Watch earlier today, the lone Rebel contributor to become the subject of a Welsh rock musical appears to have been removed from the site’s masthead some time between December 3rd and 10th. She used to occupy a prominent place next to “Commander” Ezra Levant at the top, but in November was booted to the bottom, before being exorcised entirely the next month. Her last video was published on The Rebel’s demonetized YouTube channel at the end of October.

The “white genocide” booster, who once seemed dismayed by the presence of Black people in Toronto, was the biggest name remaining at a site that once served as the SNL of launching alt-lite careers, boasting such luminaries as Faith Goldy, Lauren Southern, Gavin McInnes, Tommy Robinson, Laura Loomer, and others whose names are mercifully no longer at the ready in our heads.

Salvini has cut immigration by 81%, is strong on law and order & has made being a proud nationalist something to be celebrated.

Unlike the cesspits ofU.K. & France – Italy has something truly fabulous. Hope. pic.twitter.com/2jQ6IfKNe2

Hopkins’s departure also means that for the first time in nearly two years, there is no one on the masthead listed as a “Shillman Fellow,” a position subsidized by barcode-scanner magnate Robert Shillman. Robinson, a previous fellow, reportedly earned the equivalent of about $170,000 CAD per year from the site. Last year, Hopkins applied for insolvency following the loss of a high-profile defamation suit.

Having joined the site in January of 2018, Hopkins’s tenure lasted nearly a full year. Former Trump advisor Sebastian Gorka, Rebel Media’s other high-profile get last year, stuck around for just two and a half months.

In The Rebel’s 2018 annual report, Levant says that with the turnover at the site, they can continue their “exciting mandate of recruiting and developing new talent.”

We’ve reached out to Levant and Hopkins for comment, because this seems like as good a time as any to check in.

Great honour to meet and share the stage for the freedom of speech panel with @KTHopkins. What a talent and amazing presence. Also met incredible @SheilaGunnReid and @NewWorldHominin #rebellive https://t.co/Rrv6G8Yi8k

Katie Hopkins is blaming the victims in the Pittsburgh synagogue shooting. There is no bottom to the vileness on the right pic.twitter.com/m95L34l9nT

Top image: Actual thumbnail from The Rebel video about a correction Hopkins obtained from the Daily Mirror.