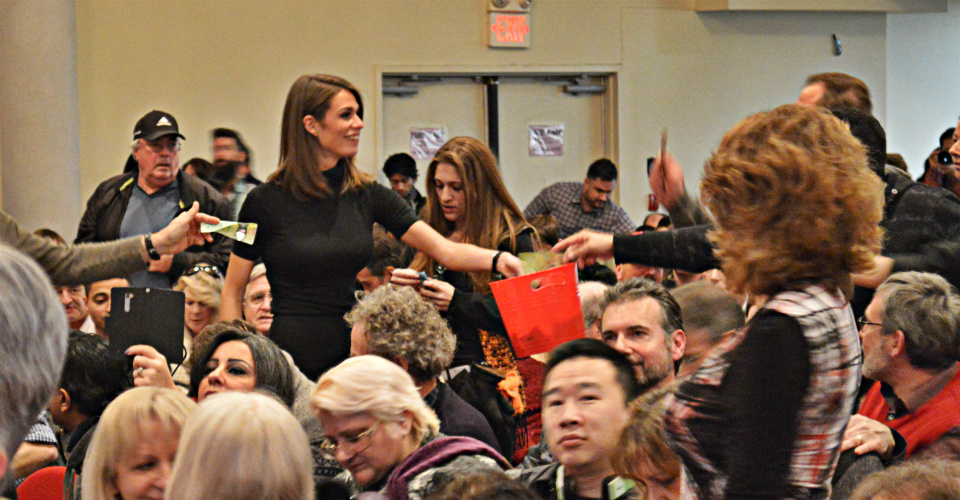 The Rebel Claims They Moved Their Rally Due To Threats. The Original Venue Says That’s False.

When asked for proof of the supposed threats, Ezra Levant called our reporter a "sexist pig."
Article By Evan Balgord
Share

On Wednesday, The Rebel Media hosted a “Rally for Free Speech” against M-103, the non-binding House of Commons motion condemning Islamophobia. First announced for the Montecassino Hotel and Event Venue in Toronto’s Downsview neighbourhood, it was relocated to the Canada Christian College (CCC) in Don Mills when, according to organizers, the original venue backed off due to threats. But while anti-Rebel protest coordinators encouraged supporters to phone Montecassino, its general manager tells CANADALAND that he was neither aware of any threats, nor was that why the booking was cancelled.

Four Conservative leadership candidates spoke at the event, including Kellie Leitch and Chris Alexander. The venue was standing-room-only as hundreds came to hear them, the Rebel’s Levant and Faith Goldy, and CCC president Charles McVety defend Islamophobia and hostility toward Islam as free speech.

The Rebel had previously signed a contract with Montecassino but, according to Levant and Goldy, the venue cancelled on them at the last minute because it was receiving threats.

“They said that we were white supremacists and they issued death threats,” Goldy told the crowd about the people behind the alleged efforts. “All of this is available on their Facebook pages. We know this is what they did. And unfortunately the last venue had to cancel on us.”

In a Toronto Sun article, Joe Warmington wrote, “It seems the hotel got a ‘threatening’ call and decided it didn’t want to have such an event after all.” It is unclear where Warmington got this information, and he did not respond to inquiries by time of publication.

But Montecassino general manager Prospero Ambrico says there was “no threat of anything, we just made our decision and that was it.”

He couldn’t definitively state that no threats were received by any member of his staff, but that nothing came to his attention as general manager.

The Canadian Christian College, on the other hand, offered a safe space for Levant and The Rebel. McVety, who is known for anti-LGBTQ and anti-Muslim views, offered use of the venue for free. Members of the Jewish Defence League stood watch outside while professional security inspected coats and bags inside.

On Facebook, the organizers of counter-event “Protest Against Kellie Leitch/Rebel Media Hate Speech Rally” enthused, “The venue for this event has changed due to the power of calling in to the hotel!!!!!!”

On the event page, a woman named Morgan Sim wrote that she called Montecassino and that “the woman I spoke to said they cancelled the event because ‘We definitely don’t believe in what they stand for.’”

In front of the crowd, Levant said that it was “so-called anti-fascists [that] started threatening the hotel venue with violence because we were talking about M-103. The hotel panicked and broke the contract with us.” He went on to claim that Trudeau and the Liberals “condone through their silence the violence that tried to kick us out.”

There are no calls for or threats of violence visible on the page for the above Facebook event; instead, organizers ask protesters “to be mindful that one of Rebel Media’s tactics is to drum up conflict or provoke violence at these protests, and then use it to further their agenda.” In another post, the organizers write that “there is no violence or violent action planned or intended on our part. However, we have received some threatening comments and messages from Rebel Media supporters.”

Asked to substantiate the supposed threats in light of Montecassino’s denial, Levant declined to do so, instead conflating questions about threats to the venue with threats made to Goldy. In an email, he goes on to insult Jesse Brown and CANADALAND and write that this reporter is a “mansplaining . . . sexist pig. (See full message below.)

Near the end of the rally, Levant called on his “bucket brigade,” led by Goldy, to collect donations from the crowd to “pay for our security, which is almost as high of an expense now as our journalists themselves.”

I’m a freelance reporter. I was at the Freedom Rally last night and I’m writing a piece for Canadaland. I need a response quickly if you want to comment on the below.

Faith said that the venue for the ‘Freedom Rally’ had to be moved because “anti free speech activists phoned in to our last venue . . . and they issued death threats.”

You (Ezra) said that “some so called anti-fascist thugs started threatening the hotel venue with violence . . . and the hotel panicked and broke the contract with us.”

Further, you used these “threats” as a way to kick off the bucket brigade fundraising drive to “help defray our security costs”.

I’ve spoken with management at Montecassino. They’ve told me that they weren’t supportive of the event, that there was “no threat”, and that they just made the decision to cancel.

In the absence of your response, I will be reporting that your claim that there were threats is untrue. If you have evidence to the contrary or want the opportunity to comment, please write me back immediately.

He’s so good at mansplaining things to women. He’s such a white knight. He can’t hold on to his female staff though, which is a bit odd, don’t you think?

You’re the same way. You are calling Faith a liar. She was the victim of threats of violence; but you’re mansplaining to her that “no, she wasn’t”. Because you’re a sexist pig.

Write what you want. It will say a lot more about you, than about Faith, and the strong women at The Rebel.

P.S. I admire Jesse’s entrepreneurial spirit. If he ever needs tips about making payroll, or having a female-friendly work environment, I’m happy to help.