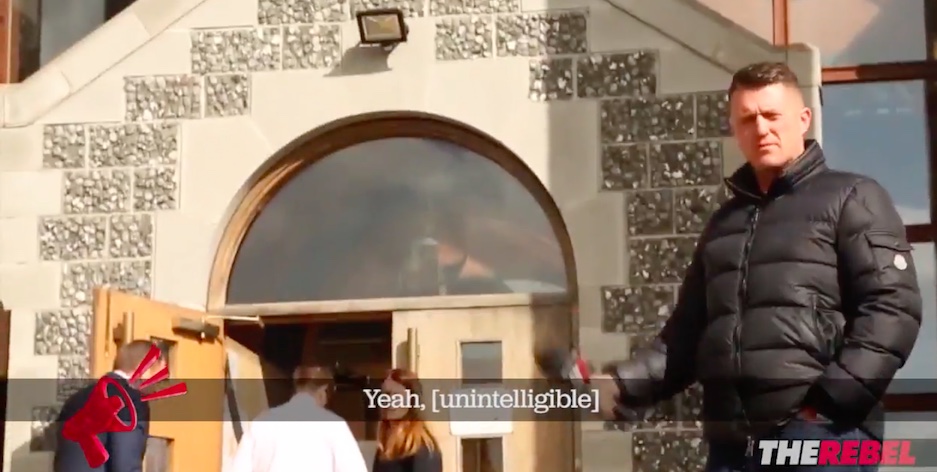 Note (5/26/2017, 7:25 p.m.): This is an updated and revised version of a story originally posted Sunday evening and amended roughly an hour and a half after that. (You can read that amended version here.) The initial version erroneously stated that Tommy Robinson had already been charged with contempt of court, whereas, according to court officials, this did not occur until his appearance the following day.

A Rebel Media personality recently arrested for filming in and around a courthouse in Canterbury, England, has been given a suspended three-month jail sentence for contempt of court.

Police had arrested Tommy Robinson, the founder and former member of the English Defence League — an anti-Islamic, far-right organization he departed after it became overly radicalized by neo-Nazis — at home on May 10 at 4:30 a.m. local time. Robinson began broadcasting a live Periscope video in the midst of his arrest, but was told to desist from filming shortly after he started.

On Monday, Judge Heather Norton found Robinson in contempt of court for having entered the courthouse on May 8 to confront, on camera, four men on trial for gang rape. She delivered a three-month jail sentence, suspended for 18 months, which means he will be sent to prison if he commits an offence in the next year and a half. Robinson’s lawyer had argued that custody might place him into danger.

According to the Canterbury Times, “Robinson claimed he had only been working for an internet TV company for six weeks and hadn’t been taught media law.” Robinson joined Ezra Levant’s Rebel Media earlier this year to open its UK bureau, now consisting of at least three contributors. Levant declined to comment on Robinson’s claim as reported by the Times.

Judge Norton had severe words for Robinson and his reporting.

“You then continued to film in the court building, even though you had been told not to, and these matters were then published on the media with, as I am aware, a very wide viewing rate, referring to the defendants by their religion and referring to them as ‘Muslim child rapists’ or ‘Muslim paedophiles’ … indeed on the video footage from inside the court building, we can hear you say that the paedophiles are hiding, that the police have asked you not to expose them as paedophiles, but you say ‘we will’; and when you discover that they have been taken out of the back door, you talk about ‘going round to their house,’ and again, the intention of getting them on camera.”

The publication ban on Robinson’s hearing was lifted today after the “interlinked” trial he was attempting to cover concluded. In that trial, a jury found four men guilty of gang-raping a 16-year-old girl after she asked them for directions.

In his work for The Rebel, Robinson primarily focuses on Islamic extremism in England, such as the “Muslim rape gangs” he believes are now pervasive in his country and go largely unreported by the mainstream press. He has had run-ins with the law before, serving jail time for tax evasion and for using someone else’s passport. Robinson disputes his past criminal record as a smear campaign and witch hunt orchestrated by politicians and police to silence him for his leadership role in raising awareness of what he sees as a growing Islamic extremism problem within England. Robinson is a complicated character, and depending on who you ask, he’s either a traditional liberal using his freedom of speech to expose Islamic extremism and intolerance, or a racist nativist inciting intolerance and hatred toward Muslim immigrants. Robinson also aggressively confronts journalists he sees as slandering him in segments called “Troll Watch,” recently showing up at the workplace and homes of journalists and others who’d labelled him “far-right,” “racist,” and “white supremacist.”

On May 8, Robinson went to a Canterbury courthouse to record himself confronting those four men he described as “Muslim paedophiles” then still standing trial.

In an email to CANADALAND, University of Oxford law professor Laura Hoyano explained the law banning filming in and around courthouses: “The Courts in England and Wales are generally open to the press and public … but filming and recording is banned under section 41 of the Criminal Justice Act 1925 and the Contempt of Court Act.

“The rule is widely known, so it would be very surprising if this journalist did not know it.”

The same day Robinson was arrested, Rebel founder and self-described commander Levant — himself a former lawyer — devoted the first half of his paywalled show to Robinson’s arrest and aired some of the footage from outside the courthouse.

“There [Robinson] is in front of the courthouse talking about the rape trial within. Now we have not aired this segment yet, we’re still editing it, but this is what the police came to his house about. Tommy was lingering outside waiting for the accused rapists to come out, and then he would put questions to them as they came downstairs. Well, this obviously irritated some police inside the court… So they sent some court officials to tell Tommy, ‘Well, you better not.’ They were trying to come up with something that he wasn’t allowed to do,” Levant told his audience.

Levant then explained that the police, “in collusion and cooperation with the rape suspects, sneaked [them] out another door of the courthouse, helping them to avoid Tommy.” Levant also disclosed that Robinson was livestreaming video from his phone and was “briefly inside the court.”

In email correspondence with CANADALAND, Levant said he believes it was inappropriate for the police to arrest Robinson early in the morning. “There was no need to do so. This is equivalent of getting a ticket. 4 a.m. is when you swoop in to catch murderers or terrorists who are a flight risk. This was 100% to intimidate Tommy’s family, to pressure him into abandoning his work.”

Hoyano says that this type of arrest is not uncommon in the UK: “As for the dawn arrest, they are not that uncommon in England. Usually the police use them when they otherwise cannot be confident where they could locate the suspect during daylight hours. I can’t say why they used it here. I can only speculate that they may have thought he was about to leave the country, or to leave the premises for places unknown. You would have to ask the Kent Police.”

A Kent Police spokesperson would not elaborate on the nature of the arrest but confirmed to CANADALAND that “on the morning of Wednesday 10 May 2017 officers attended an address in Luton, Bedfordshire, and arrested a 34-year-old man for contempt of court. The arrest is in relation to an incident at Canterbury Crown Court on Monday 8 May 2017.”

Shortly after the arrest, the Rebel started a fundraising campaign — a specialty of theirs for funding activism — to pay for two top barristers to represent Robinson by sending out an email blast to subscribers to help fight the ostensible injustice of Robinson being arrested “for attempted journalism.”

Robinson was then released on bail 12 hours after being arrested. On Thursday, May 18, Levant sent another email to continue crowdfunding to defray the 10,000 pounds (roughly $17,230 Canadian) for Robinson’s legal costs, including his representation at his hearing on Monday, May 22, for the judge’s sentencing. The total amount thus far raised has not been made public on The Rebel’s fundraising page.

Levant claims the U.K. police are embarrassed by Robinson’s coverage exposing their negligence: “Throughout the U.K., authorities have been turning a blind eye to Muslim rape gangs, out of political correctness. If you doubt it, Google the Rotherham inquiry. 1,400 British girls were raped in a city of 250,000 over years, and the police and politicians and social workers all knew — but everyone was afraid of being called racist.”

(Although reports have cited fears of perceptions of racism as a reason that the Rotherham scandal festered for so long, other reports question whether this was merely an excuse for the authorities’ incompetence.)

Last week, Robinson and his Rebel colleague Caolan Robertson were driving to confront a Muslim politician for defending the character of an accused rapist when they were “ambushed” by what Robertson described as several cars full of “Muslim men” that “chased after us and tried to block the road. They threw bricks through the windows. They tried to punch through the windows… They rammed the car off the motorway. The whole side of the car is fucked.”

Robinson and Robertson also claim the assailants uttered death threats, and Robinson was again livestreaming as police spent an hour searching his car.

UPDATE: @TRobinsonNewEra & I have been ambushed, rammed off the road, chased & attacked for reporting in a Muslim area. More soon. pic.twitter.com/MUQ0SgetAa

This week, as part of his coverage of the the Manchester terror attack, Robinson made a video of an angry rant outside a mosque in the city.

“They’re in bed with them. Our politicians have sold us out. They’re working hand-in-hand with radical extremists.”

On Tuesday, he also spoke about Manchester with Alex Jones on InfoWars.

These recent events add to a growing laundry list of sensational incidents involving Rebel commentators going from covering the news to becoming the news. As CANADALAND reported, Levant’s new Washington correspondent — accredited for White House press briefings — made international headlines recently for being the first to start the #MacronLeaks hashtag, spreading the data dump of the new French president’s campaign emails two days before the French election. Robinson also made headlines and was condemned by the mainstream media when on March 22 — hours after British-born Khalid Masood killed four people and injured many others near the U.K. parliament — he recorded a rant near the site of the terrorist attack, blaming the country’s open immigration stance for the death toll.

Robinson and Robertson were both contacted earlier for this story, but both declined to comment citing the upcoming hearing at the time. They and Levant were again contacted after the press ban was lifted. We will update if any of them agree to comment on the judge’s ruling.

Top image from Robinson’s video outside the Canterbury courthouse, as shown in the May 10th episode of The Ezra Levant Show.