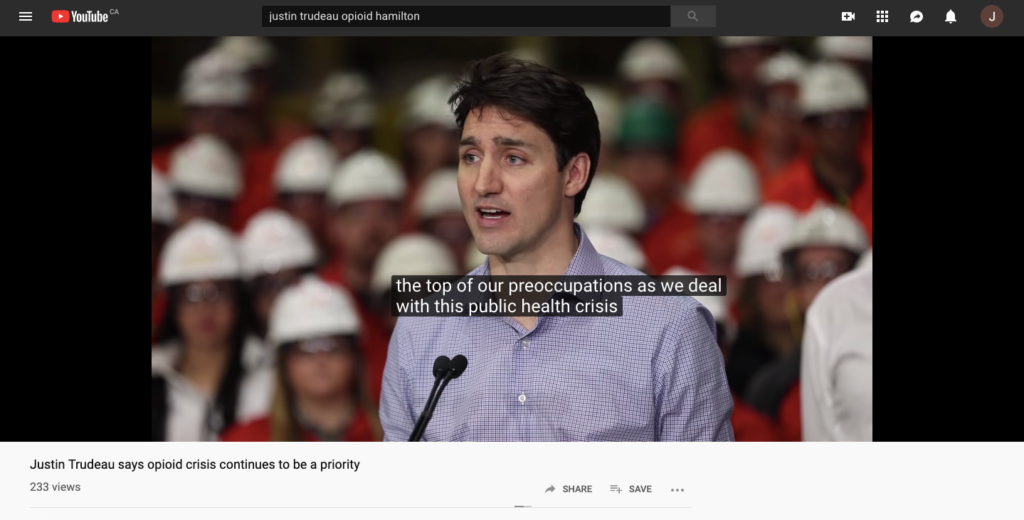 Responsible Reporting on The Overdose Crisis Is Crucial For Canadian Voters

With the Canadian federal election coming, journalism about candidates’ policies on issues like housing, immigration, and public health is immensely important for assisting Canadians in making an informed decision on who they will vote for.

For this election, the overdose crisis is a public health emergency of unique significance: over 10,300 Canadians have died of overdose deaths in the last three years, and the numbers show no sign of lessening.

In contrast, the Canadian news media has shrunk over the last 10 years, with over 250 outlets closing or merging from 2008 to 2018.

At times, this weakened press corps has struggled to convey information on issues of major importance to population health. The perspectives of communities and advocacy organizations, and findings in high-quality research are often lost amid stories that obfuscate important context related to health issues.

For example, in 2018, the Toronto Sun published a column by Dr. W. Gifford-Jones (the pen name of Kenneth Francis Walker, a retired MD and vaccine skeptic), which said the government would have to “bring back the death sentence” to win “the war on drugs.” The publication of articles that demonize drug use and recommend intensified criminalization and punishment as a response to the opioid crisis reveals a problematic tendency to favour retrogressive ideological positions over fact-based reporting and the exploration of legitimate solutions.

Sensational media coverage of the illegal drug trade and illicit drug use has been published in Canada for at least a century. As early as 1920, reports on drug use and people who sold drugs from The Globe and Mail splashed words like “drug fiends,” “drug addicts,” and “heroin scads” across their headlines, while the Montreal Gazette referred to illicit substance use as “the drug evil” and described people who use drugs as lacking “moral courage.” In the 1930s, a lens of moral panic abounded, with The Globe and Mail describing drug use as a “vice” and drugs themselves as a “menace.” Throughout the 1950s and ‘60s, much coverage about illegal drugs focused on routes of the illicit drug trade and court cases involving those who were being prosecuted.

Though stigmatizing mythologies about people who use drugs have frequently been present in Canadian media reporting, there has also been a chorus of committed voices condemning criminalization and demanding compassion and support for people struggling with substance use. In 1970, The Globe and Mail published an editorial titled “Tearing down the myths,” about a report by the Commission of Inquiry into the Non-Medical Use of Drugs. The editorial endorsed the report’s recommendation of treating drug use as a health issue rather than a criminal one, and even entertained an argument against imprisonment for minor drug offences. Other reporting in more recent years from newspapers such as the National Post and Montreal Gazette discuss the objective, measured health and economic benefits of using harm-reduction models through services such as needle exchanges and supervised consumption sites. Sharing this information widely and readily is critical to stopping the ongoing waves of preventable deaths across the country.

While the media has made some headway in covering the overdose crisis, Canadian law has made little progress in the way it handles drug criminalization. Though Justin Trudeau’s Liberal government decriminalized cannabis in October of 2018, criminalization for substances such as cocaine, fentanyl, morphine, and methamphetamine remain part of Canadian drug law under the Controlled Drugs and Substances Act. Through all iterations of official drug policy in Canada, beginning with the Opium Act of 1908, harsh penalties have persisted for the use of drugs that have remained popular and useful for treating pain and a variety of ailments. It is well known that criminalization propagates harsh stigma towards people who use drugs and exposes people to a poisoned drug supply within the illicit drug trade.

Given the staggering number of preventable overdose deaths across the country since 2016, political parties’ proposed responses to the opioid crisis and drug policy in general are an important topic for election coverage.

At the end of May, it was reported by the Canadian Press that Conservative leader Andrew Scheer now wants to “hold China accountable” for the distribution of illicit fentanyl. The article did not mention drug policy, criminalization, or stigma as roots of the overdose crisis, although it did note that the 10,300 preventable deaths that occurred between January 2016 and September 2018 were the primary reason that Canadian life expectancy did not rise for the first time in four decades.

Despite increasing pressure for the decriminalization of drugs, Justin Trudeau has resisted years of calls from the public, health experts, the harm reduction community, and members of his own party to move decriminalization forward for all drugs. At a federal NDP leadership debate in 2017, Jagmeet Singh declared that he “would call for the immediate decriminalization of all personal possession offences when it comes to drugs, period.” Recently, Travis Lupick, a journalist and author, called for a federal debate on drug decriminalization in advance of the federal election. For an issue of this magnitude, it bears repeating that a dedicated discussion from candidates on their proposed response to the overdose crisis is critical for the upcoming federal election. Evidently, Canada’s current policy response has exacerbated and accelerated the daily preventable deaths across the country.

Communities and advocacy groups have led discussions on how to reduce the harms associated with using drugs for decades. Research and evaluation of real-life programs worldwide has supported their recommendations, and it is critical that major news outlets report the truth about preventing overdose deaths, rather than fixate on opioid prescribing or intensified policing. If candidates who wish to lead the country have views and approaches that oppose established facts on best supporting the population, it is the responsibility of journalists to make that explicitly known, while amplifying the truth.

Anne Rucchetto is a writer, public health researcher, and public speaker living and working in Toronto. She has been published as an author, journalist, academic, short fiction writer, and poet across Canada and internationally.

Image: Screencap of Justin Trudeau speaking at a press conference in Hamilton, filmed by the Canadian Press.