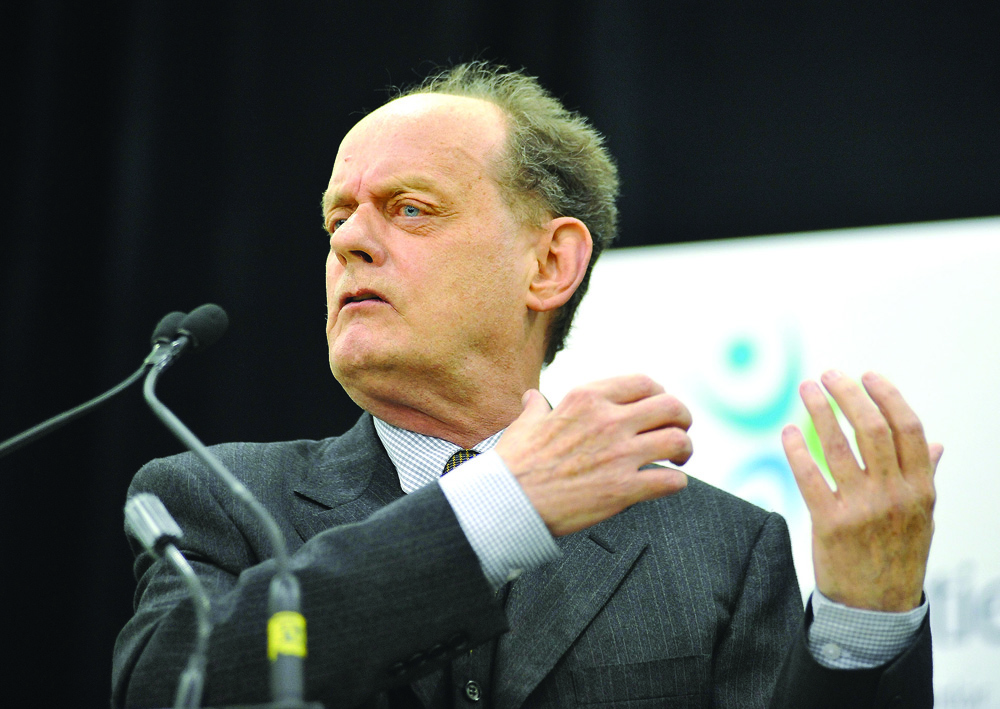 If you heard this week’s podcast, you know that Rex Murphy has been paid to speak for Oil Sands companies, upwards of an estimated 25 times in the last five years, at a rate as high as $30,000 a pop, all the while using his pulpit at The National and his column at The National Post to beat the drum for the interests of these same companies. The question is, now that everybody knows about this, what will the CBC and the Post do about it?

First, an update on the CBC, whose management can’t seem to decide whether they want to dismiss or address the growing concern about Rex’s lucrative side-gig.  On the one hand, CBC Editor in Chief Jennifer McGuire told the Vancouver Observer that she’s “trying to understand the complications of demanding this obligation (to disclose) of our freelancers. We will have more to say about this soon.” The “freelancer” thing is a red herring- full-time CBC employees like Peter Mansbridge, Anna Maria Tremonti and Jian Ghomeshi all moonlight as paid speakers, so if the CBC is working on a disclosure policy, one imagines it should apply to everyone, lest the audience be left in the ridiculous position of having to somehow determine the exact contract status of each CBC personality. This distraction aside, McGuire seemed to be taking the issue seriously and moving towards some kind of new policy.

But then, CBC press flack Chuck Thompson told iPolitics that the they have “received a similar number of comments on other matters but in terms of public comment, this is in no way our most contentious issue and in this case, most of them appear to be a part of an organized campaign.”

Let’s parse that affront to clarity. So, If you’re concerned about Rex’s entanglements, you should know that:

a)More people have complained about other stuff.

c)Most of you complainers on this one are just clicking “send” on some environmentalist group’s form letter, so the whole issue doesn’t really count.

Well, wow. It is true that The Sierra Club has gotten active on this, but so what? Is “we are innocent targets of an environmentalist group’s campaign” really how the Ceeb wants to handle this one? I would have just gone with- “yeah, I guess we should ask Rex to disclose this stuff from now on”, but I’m not a PR professional, so what the fuck do I know?

Hey, at least The CBC is saying something. As of yesterday afternoon, The National Post had yet to respond to the affair at all, so I renewed my request for comment, and soon got a call from Rex’s editor, National Post Comment section editor Jonathan Kay. Here’s how that went.

Jesse, Rex will respond in his next column, so I really don’t want to comment before that.

Okay, but will there be any change to The National Post’s editorial policies going forward? Like, will you disclose his relationships from now on?

Well, I feel for the CBC’s position in this, because it’s a morass. We literally deal with hundreds if not thousands of freelancers a year. Many of them do lots of speaking for hire for lots of different groups. We do require them to disclose it if they have conflicts of interest- genuine, substantial conflicts. Usually, it’s if you own a stake in a company you’re writing about or if you hold a patent…It’s really more an issue for the Financial Post. The biggest issue for us is political party affiliations.

Jon, I do paid speaking, and yes, it can be a morass- it’s tricky to keep track of each group I’ve spoken to.  When I cover a new topic, to remember if I’ve ever been paid by people in that industry…. But this is a bit different. Rex has done, it seems, at least 25 speaking events for this one specific industry, which he writes on behalf of, again and again.

Well it’s a chicken or egg thing. I’ll use myself as an example, and maybe I’m creating controversy for myself. I write about Israel and the Middle East conflict. So then I get invited to speak for groups about that, and I get paid- not like Rex, maybe a three figure fee. You develop an interest in a subject, it becomes a passion, and because of that you get gigs. I don’t feel comfortable calling that a conflict of interest.

Okay, well, two things: first of all, you mention the amount you get, because that’s relevant.  Rex isn’t getting a few hundred bucks.  He’s getting much more, maybe hundreds of thousands in total.  So let’s give him the benefit of the doubt that he actual believes these things he’s saying. But he now has a strong incentive to continue believing them, to not change his mind, and to voice them again and again. Secondly Jon, you’re making this complicated effort to determine what is and isn’t a conflict of interest. But why is that your call to make? Shouldn’t you disclose all the information to your readers and let them decide if it affects how they read Rex?

Well,the reality is, in the print medium, you don’t have room in a credit line to explain every detail…But you’re asking fair questions, in good faith I think. So yes, If it’s 4 or 5 figures, I think readers might have a right to know. I’m not sure where you draw the line.

You’re going to have to figure that out, aren’t you?

Well, this situation certainly has created new awareness of the issue. And I think that’s a good thing. But Jesse, I do have to get going soon.

I’ll let you go, but first can you tell me- when did you learn that Rex was being paid by oil companies?

It wasn’t a secret. I remember Rex saying, ‘Jon I’m going to be late, I’m  going to give a speech in the oil patch’. He speaks all the time. He’s one of the most sought-after speakers in Canada.  To be honest, I didn’t ask that much about it because he’s not a staffer. I don’t ask people about-  I mean, as the journalistic industry gets more competitive…if you’re making $30,000 a year, and you’ve got to put food on the table…It’s almost professionally cruel to prevent people from doing that to earn a living. I know this doesn’t apply to Rex, but…we tend to encourage it, we want people to build their brands. But Jesse, I really must get going.

Okay, but this is a conversation worth having. Will you come on my show for an interview about it?

I’ll have to discuss it with my boss, but maybe. I really do have to go. I’m actually speaking at Holy Blossom Synagogue tonight.