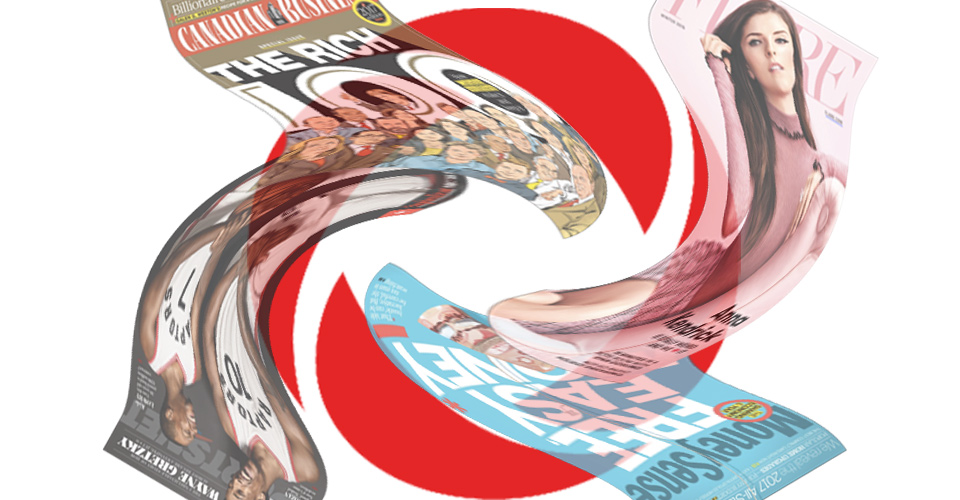 The company closed, sold off, or cut back on each of the 16 publications that had received federal grant money for the entire year
Article By Graeme Gordon
Share

Rogers Media appears to have kept all of the $8,906,846 from 16 federal grants it received for its periodicals for the 2016-17 funding period, despite the media conglomerate either closing, selling, or scaling back the print schedule of each publication at the end of last year.

“The 16 grant amounts were paid out to Rogers Media Inc. in full, as they met the eligibility criteria for the Aid to Publishers 2016-2017 funding cycle,” Canadian Heritage spokesperson Tim Warmington said by email.

Of the 10 applications for Canadian Periodical Fund (CPF) grants that CANADALAND obtained through access-to-information requests, all show Rogers Media agreeing that “the periodical[s] will continue to be published in print until at least March 31, 2017,” the end of the 12-month funding cycle. However, on September 30 of last year, Rogers announced it would be cutting back the number of print editions, eliminating all print editions, or completely divesting itself from each of the 16 periodicals that were recipients of federal grant money:

But although many of the Rogers periodicals receiving CPF grants didn’t meet the number of issues agreed upon in the application, Heritage only requires a publication to print a minimum of two issues within a grant cycle, no matter how many issues the periodical was initially funded for. Grants are typically paid in a lump sum.

Asked about the disposition of the grant money for publications the company no longer operates, Rogers Media communications director Andrea Goldstein would only tell CANADALAND, “We communicated our plans to Canadian Heritage and followed all the rules set out in the Canadian Periodical Fund.”

With the recent push to expand and enlarge the fund to include daily and community newspapers, the Rogers case offers unusual insight into how it currently operates in practise.

General-interest weekly Maclean’s received approval of its annual $1.5 million CPF grant for 2016-17 in June 2016, then announced at the end of September that it would cut 75% of its print editions to become a monthly at the start of 2017.

Some of Rogers Media’s 2016-17 CPF grants had already been reduced in value from their 2015-16 counterparts because certain periodicals had scaled back their number of print editions in the previous year. In March 2016, Canadian Heritage sent an email with the subject “Missing information” to a Rogers Media representative to determine how many print editions these periodicals were now publishing annually.

For instance, Heritage asked for clarification as to why Canadian Business was reduced from 18 issues to 14 issues: “According to your answer to Part E of the Application Form, 14 regular issues of Canadian Business were published during the financial year, compared to 18 last year. I also noticed that only 13 issues appear on the circulation report. Please briefly explain this decrease in the number of issues published and revise and re-send to me page 5 of the application form.”

Eventually, Heritage decided that the periodical was only eligible for 13 issues, not 14, and had Rogers amend the application.

“Thank you for these clarifications. As you understand, the program cannot offer funding twice for the same issue. This is the reason why we need to know the exact number of issues published during your regular publishing cycle,” wrote the program officer.

A letter sent by Canadian Heritage to all grantees states, “If your publishing firm and/or periodical undergo any changes to their status, such as a change of ownership or a change of address, you must immediately advise the CPF” (emphasis in original).

The 2016-17 Applicant’s Guide [pdf] also spelled out that grant recipients “must immediately inform” the Heritage department if the “periodical ceases publishing or changes to a digital format.” The same subsection also explained how grant recipients must advise the department when the periodical is being sold “before the transaction is finalized, to determine whether the periodical and new owner remain eligible.” Furthermore, a grant recipient “must send a copy of the sale contract to the Department.”

Applicants were warned that “a recipient found to have submitted false or unsupported information may be required to repay the full amount of the financial support received, and may be declared ineligible from the Canada Periodical Fund for the next two fiscal years or more.”

According to Warmington, “If a periodical ceases to be eligible during any part of the funding cycle, all or part of the financial support received must be reimbursed.”

But he also tells us: “Rogers Media Inc. informed the department in Fall 2016 of their plans related to its periodicals … [and] respected the program guidelines and met all of the requirements under the funding agreements.”

In another access-to-information request, CANADALAND received all communications between Rogers and Heritage from July 1 to December 12, 2016, finding almost all of the scant emails were unrelated to changes at the 16 periodicals. Only one email, sent by a Rogers representative on November 1, plans a 15-minute phone call to “update” the department “on a couple of our sales.” Other than plans for that one short call, there was no written correspondence within the above timeframe between Rogers and Heritage involving the print pullbacks, sell-offs, and closures of Rogers’s 16 publications receiving grants from the department in the last seven months of 2016.

It’s unclear whether the sale contracts for the publications sold by Rogers in 2016 were sent to the department at the time of the sales, because those documents may have been withheld from the access request on the grounds of being third-party confidential information. None of the communications provided to CANADALAND, however, suggest this occurred. It is also unclear whether any portion of a grant may have been transferred in a sale.

“All records held by [Heritage] that were relevant to the request and within its time period were provided in response to [your] request. No records were withheld,” wrote Warmington in an email.

A couple months after Rogers announced the shakeup of its publishing division and several months after receiving the 16 CPF grants worth over $8.9 million, it began rounds of layoffs. In late November, 60 full-time employees working for Quebec titles were laid off. Later in the week, an additional 27 full-time employees were laid off, primarily from the editorial and production departments, including the editor-in-chief of Maclean’s at the time. Then, early in February, another 15 Maclean’s staff working on the current affairs team were also let go.

In the first quarter of 2017, Rogers posted a $26 million gain in its media division, with a 6 per cent increase in revenue, largely due to its sports-related ventures. Before the upheaval of its publishing operations, Rogers had lost 30 per cent of its print revenue compared to the previous year, mostly due to advertisers moving away from the medium to cheaper digital ads.