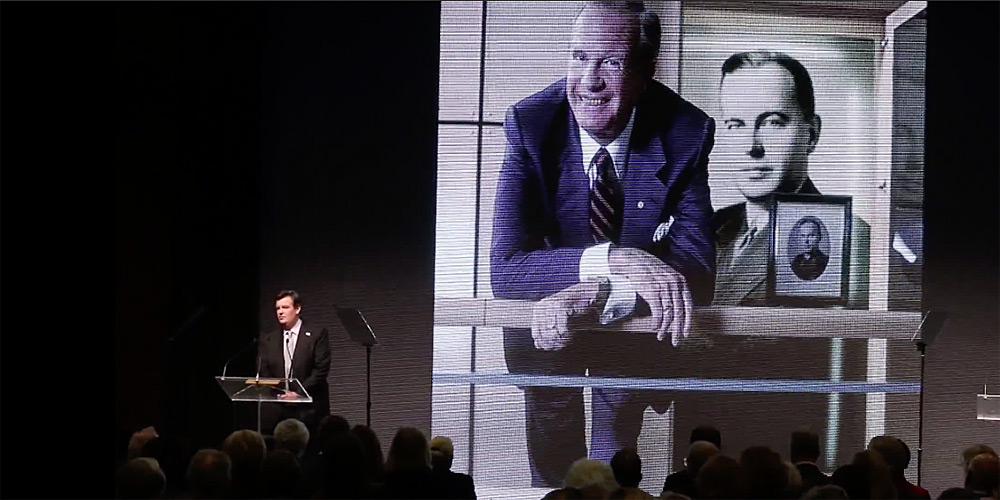 On May 27, 2008, the employees of Rogers Communications loaded onto buses. Their destination was the Rogers Centre, and the occasion was the 75th birthday of company founder Ted Rogers.

The telecom giant had purchased and renamed the stadium a bit more than three years earlier, and, for a few hours in the middle of a Tuesday, took full advantage of the field’s vast acreage to host a full-on carnival, with stilt-walkers, midway games, a mechanical bull, and 80s Canrock quintet Glass Tiger. (The Globe reported that a more intimate celebration the preceding weekend featured Harry Connick Jr., Paul Anka, and Harry Belafonte.)

The event culminated with 7,000 employees singing “Happy Birthday” to their boss, followed by perhaps the most elaborate fireworks display one could safely have under a 282-foot dome.

It was the kind of birthday bash that could be viewed as obscene, had it not turned out to be Ted Rogers’s last: suffering from congestive heart failure, he passed away that December.

As not just the founder of his company but also its CEO, media speculation around his succession plans stretched back at least to 1990, when the Globe took note of then 22-year-old daughter Lisa joining the board of Rogers’s broadcasting subsidiary.

“None of [my children] will succeed me because of my age — there’ll be someone who’s not a Rogers in between,” he said to the paper. “But after that there will be plenty of opportunity.”

Three decades after those remarks, and 13 years following his death, that opportunity has now devolved into a crisis. Ted’s only son, Edward S. Rogers III, has gone to war with his mother and three sisters. On the surface, the dispute stems from his recent efforts to fire the CEO, Joe Natale, and replace him with the CFO, Tony Staffieri. But the events quickly cascaded to expose larger, longstanding rifts regarding the direction of the company, what it means to own and run a family business, and who gets to follow in the patriarch’s footsteps and how.

On this week’s CANADALAND, Jesse Brown, Cherise Seucharan, and Jonathan Goldsbie take a look at the past, present and future of both Rogers and the Rogers:

Much has been written on the topic lately, and much was written in the final years of Ted’s life — but there was not a whole lot in between.

A notable exception was “The Man Who Would Be King,” a 2014 Toronto Life feature by Kelly Pullen, looking at Edward’s succession ambitions and the effect of that on the company.

We spoke to Pullen for the episode and would like to share more of what she had to say. Here’s a selection of her insights, edited and condensed:

On why Ted didn’t want his son Edward to directly succeed him as CEO: “I don’t know that he thought that Edward deserved it, necessarily. Not at that point. I mean, he has been quoted as saying that he thought Ed was like a fine wine and needed to mature still. And I think he made it clear that he wanted Nadir Mohamed to take the job at that point. Because he felt Ed wasn’t ready, and obviously a lot of people agreed with that. Having Mohamed in that role created stability, continuity within the company. And so it was the logical choice.”

On family meddling: “During Mohamed’s time as CEO, there was reportedly a lot of interference, or attempted interference, by the family in the day-to-day operations. I think Mohamed, like the CEOs that came after him, tried to find ways to keep the family outside, out of the day-to-day operations. And I think that was Mohamed’s sort of parachute out, that when he was talking about renewing his contract, he presented the board with a new organizational chart, and Ed and his sister Melinda were not on it. That forced the board’s hand, because if the board wouldn’t sign on to his new vision and org chart, then he would have to be let go (with full compensation). So he was able to effectively resign, as opposed to being fired, although they never publicly said whether he was fired or resigned. But he triggered his own exit.”

On Loretta Rogers, Ted’s widow: “She was as much of a founder as Ted was, because their life early on was really precarious. He was over-leveraged a lot of the time; they would remortgage the house. She had a safety net behind her, coming from a wealthy family. But he was constantly pushing the limits in terms of leveraging debt and trying to refinance in order to help the company grow. Loretta is a really interesting character. I’m kind of fascinated by her. I’ve never met her, but I’ve observed her. She’s an artist. She’s sort of eccentric, I think, like Ted. Probably she needed to be, to fall in love with someone like him. She kind of dresses up in wacky outfits sometimes and is a fun-loving, entertaining kind of person. I think my story I wrote for Toronto Life maybe gave the impression that they were really buttoned-down, but I don’t think they really are. There is a side to them that’s kind of quirky and eccentric.”

On Suzanne Rogers, Ed’s wife: “She was the daughter of a miner. Grew up in Elliot Lake. She made her way to the University of Western Ontario, which is where she met Ed. Suzanne is a bit of a clothes hound. She loves fashion, high fashion, and is friends with a lot of designers in town. I think if Ed spends a lot of time with his boys club, Suzanne spends a lot of time with fashion-designer friends. She’s definitely flamboyant in her dress. And I think their house is very much that way. I kind of feel sorry for Ed, I don’t know if he likes it. It’s very frou frou, the décor. Her being so outwardly extravagant is a bone of contention within the family. But it’s sort of a Canadian characteristic, isn’t it, that we don’t like people to stand out too much, which I think is kind of unfortunate.”

On why the company lags behind its competitors: “I think part of the reason that the market doesn’t respond in the way Ed would like is because it knows the company’s hamstrung by the family. They’re in control, ultimately, with about 97% of the voting shares. And so there’s never going to be as much upside, I think, in the minds of investors, as there would be with a Bell or a company that’s not, you know, encumbered by family interests. Especially when that creates such turnover in the management — three CEOs in how many years? I get that he probably is anxious to see the share price go up, but is not really taking into account his own impact on that, the family’s impact on that. From what we’ve seen, it seems that Joe Natale was doing a pretty good job, pandemic notwithstanding, which is what the rest of the family is saying. Ed said he saw room for improvement. He hasn’t actually explained what that was, but I don’t think what we’re seeing now could be defined as an improvement.”

On what Ed’s real plan might have been: “Tony Staffieri, who was CFO, was widely seen as sort of doing Ed’s bidding and being very much in Ed’s camp. He was probably the vehicle through which Ed was meddling with whatever Natale was doing. The fact that he chose Staffieri as a replacement says to me that he wanted someone who was more likely to toe the line or do his bidding. And that, to my mind, means that it was sort of a temporary measure. Staffieri’s been at the company for a long time; it’s easy to put him in that role, sort of on a temporary basis or as a transition toward Ed eventually becoming CEO himself. That’s my opinion.”

On Ed’s miscalculation: “I think he’s been desperate to try to prove himself as, you know, CEO material. In this case, I think he sort of overplayed his hand. I don’t think he thought it was going to be as hard to accomplish what he wanted to accomplish as it turned out to be. I think he thought he could replace Natale with Staffieri, and he’s probably surprised at the pushback that he’s had. I think he had this plan in his head, and he thought he could execute it before anyone would question it. He had his mother on side, he thought, which would mean he would probably have his sisters. But the whole thing blew up, and so now he’s scrambling to try and rationalize why he did it in the first place.”

Top screenshot from a SickKids video, of the image of Ted Rogers looming over his son Edward at the 2014 announcement of a donation to create the Ted Rogers Centre for Heart Research.