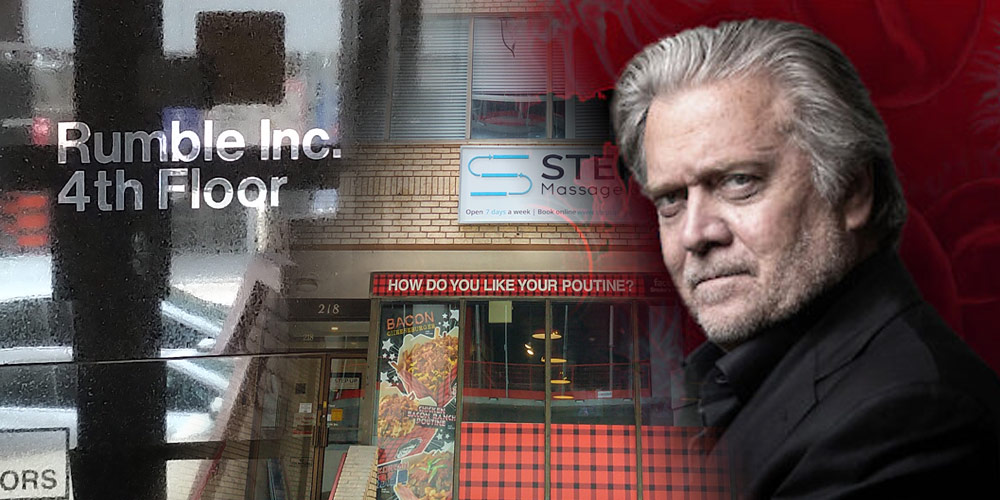 There's a new home for the worst people on the internet.
Article By Steven Zhou
Share

Rumble is a Toronto-based site that enjoyed little notice until a number of prominent and stridently conservative voices started using and boosting it after the U.S. election last November.

Founded in 2013 by tech entrepreneur Chris Pavlovski, the platform never aimed to be a right-wing hub. But the infusion of major alt-right figures and outlets dissatisfied with mainstream social media sites like YouTube and Twitter has boosted Rumble’s traffic and business.

Figures like notorious conspiracy theorist Alex Jones, who got kicked off of YouTube in 2018, and former Trump adviser Steve Bannon, who also got banned from YouTube this January, have found in Rumble a host that won’t punish them for pushing content that contains misinformation.

Rumble had over 50 million unique visits last November, a more than tenfold jump from just two months prior. That number then more than doubled to 132 million visitors this January before plateauing to around 80 million in more recent months.

About seven per cent of Rumble’s traffic comes from Canada, the second highest portion after the U.S., which accounts for 67 per cent. The Canadian traffic includes viewers of far-right media organizations like The Rebel, which started posting some of its content on Rumble in February.

The outlet has trafficked in conspiracy theories, including videos that suggested the 2017 attack on a mosque in Quebec City had been carried out by Muslim terrorists. But it has distanced itself somewhat from the more overt alt-right commentary it was known for before the 2017 Charlottesville protest.

Rebel “commander” Ezra Levant announced in March that his outlet had been demonetized by YouTube. It couldn’t run any ads or Super Chats, both major sources of income for the channel. The Rebel then got suspended by YouTube for a week in April, after which the outlet started putting their live streams on Rumble.

“And yet in our very first day, we had more viewers on Rumble than we had on YouTube,” wrote Levant in an April 22 statement. “You know: I think YouTube has been artificially suppressing our livestreams, by a factor of 99 per cent.” Referencing the former motto of YouTube’s parent company, he wrote, “I really think YouTube are what they promised they’d never be — they are evil.”

Levant’s interpretation certainly lines up with the general attitude among many on the far right regarding big tech, particularly ones who have found themselves marginalized by it.

YouTube took down a number of videos last November that asserted or suggested the U.S. election was being rigged against Donald Trump and stolen by the Democrats.

After white nationalists and neo-Nazis raided Capitol Hill on January 6th, sites like YouTube and Twitter also started banning voices that justified or encouraged the attack, including Donald Trump himself and his former senior adviser, Steve Bannon.

Bannon had already been posting his “War Room: Pandemic” podcast on Rumble right after election day in early November. He began the podcast in January 2020 from his townhouse basement near Capitol Hill, where he used to run the far-right platform Breitbart.

Soon, Rumble would become the only game in town for voices like his and others who spread the “stolen election” lie or conspiracy theories related to the COVID-19 pandemic. The shift of content by figures like Bannon onto Rumble coincides with the video-sharing platform’s huge surge in traffic and highly publicized evolution into a right-wing hub.

One of the most high-profile figures to boost Rumble in recent months is Republican Representative Devin Nunes of California, a longtime Trump supporter who was among the voices raising concerns over “election irregularities” last fall.

Nunes, who headed the House Intelligence Committee during the Special Counsel investigation into election interference by Russia in 2016, invited Rumble CEO Pavlovski on his podcast twice in November, not long after it became clear that Joe Biden was going to be the next president. Nunes complained to Pavlovski about how YouTube and other big tech companies were suppressing his videos and content because they don’t tolerate conservative voices.

Pavlovski largely steered away from political commentary during the interviews, but responded to Nunes’s complaints by saying that, since his company started, Google searches would never direct users to Rumble’s videos but always to YouTube’s, even for mundane things like cat videos.

“We’re talking about cat videos,” he said, “not even about politics!”

Earlier, Pavlovski also tweeted in defence of the idea that voices like Nunes’s were being suppressed, noting how the congressman’s podcast piled up “more subscribers in 2 months, than he has on YouTube over 4 years.”

“Only one way to explain how that could happen,” Pavlovski tweeted. “#censorship”

🚨 Congressman @DevinNunes‘s Podcast on Rumble has more subscribers in 2 months, than he has on YouTube over 4 years.

Only one way to explain how that could happen. #censorship

Since then, Pavlovski has become a bit of a fixture in interviews hosted by prominent right-wing, pro-Trump voices, from Harvard law professor emeritus Alan Dershowitz to political commentator Mark Levin, who also pushed the conspiracy theory that the 2020 election was stolen.

Neither Pavlovski nor Rumble responded to multiple requests for an interview.

Rumble’s jarring transition from an obscure apolitical platform surviving on pet videos to a darling of the online far right drew plenty of attention last fall.

Pavlovski has been asked several times whether the company’s leadership will follow YouTube and other big tech platforms in their crackdown on misinformation, particularly when it comes to public-health-related conspiracy theories regarding COVID-19.

Pavlovski has always answered that Rumble doesn’t police any content unless it breaks the law. When asked by The Washington Post whether he’d suppress false information about the pandemic, he said that the company leadership doesn’t “get involved in scientific opinions.”

Such a libertarian approach obviously aligns well with channels that want to get their message out without getting demonetized or booted off. This in turn has resulted in major growth for Rumble and big business for Pavlovski’s team. To start regulating misinformation on Rumble could therefore amount to tampering with a windfall in traffic and attention that has taken the platform out of internet obscurity.

Pavlovski himself seems to indicate as much via his social media, not just by backing and repeating the conservatives-get-censored argument spouted by voices like Nunes, but also by telling the world how much his company has grown (as any good CEO would).

In a LinkedIn post not long after U.S. election day last November, Pavlovski flaunted how he’d been “fighting to pass YouTube” for “15+ years” and finally had something to show for it. At that time, Rumble had just surpassed YouTube, Twitter, and TikTok in downloads from the Google Play Store and placed fifth in trending.

Tellingly, the number-one trending app at the time was Parler, a Twitter clone with the same libertarian, hands-off approach deployed by Rumble. Parler accounts for the largest chunk of referral traffic to Rumble — about 18 per cent in April.

Both Parler and Rumble received the same kind of attention for welcoming an influx of far-right voices onto their “pro- free-speech” platforms. Pavlovski, for one, justifies his venture by repeating how it’s an alternative to platforms like YouTube that have forgotten about the “little guy.”

The Wall Street Journal reported last week that Rumble is also getting a major injection of cash from prominent conservative venture capitalists. Unnamed sources told the Journal that Rumble might be valued at around $500 million USD after the investment goes through.

It also reported that those investors, including one-time Trump-backing libertarian billionaire Peter Thiel and bestselling memoirist J.D. Vance, have long been partial to the idea of a YouTube alternative — a video-sharing platform more aligned with their libertarian free-speech ideals.

The whole investment is being handled by Cincinnati-based venture capital fund Narya Capital, which was co-founded by Vance, Thiel, and Colin Greenspon. Pavlovski said that Rumble will use the new funds to beef up its global presence and infrastructure, from live-streaming to server capabilities.

He presents the Rumble as an attempt to fight back against tech giants that won’t give space for smaller creators or entrepreneurs. Pavlovski himself also recently launched a several-billion-dollar antitrust suit against Google LLC in U.S. federal court, for allegedly rigging search results in favour of YouTube videos.

Collage at top incorporates photos of the downtown Toronto building housing Rumble’s offices and part of the banner image for Steve Bannon’s channel on the site.