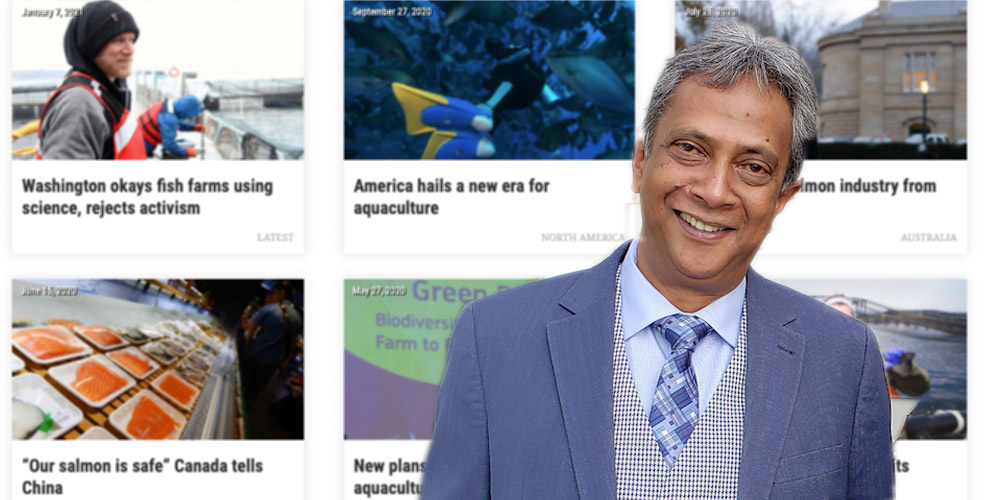 SeaWestNews, founded by a former Vancouver Province editor, champions the industry and attacks its critics
Article By CANADALAND
Share

If you google Alexandra Morton today, the first hit is her own site, on which she explains that she’s “been called ‘the Jane Goodall of Canada’ because of her passionate 30-year fight to save British Columbia’s wild salmon.” A little further down, you’ll see recent headlines from the Vancouver Sun (“Whales drew scientist to B.C. waters, but salmon turned her into an activist”) and The Tyee (“Alexandra Morton’s Book Should Galvanize Action on Salmon”).

But just a little below those, you’ll find another, from last summer, published on something called “SeaWestNews” — “Apocalyptic ‘nonsense’ from an anti-fish farm activist.” Follow the “Alexandra Morton” tag on that site, and you’ll find post after post calling her a “discredited” activist who, through her “conspiracy-laden rants…reminiscent of Donald Trump’s desperate attempts to overturn the US elections” pushes “an agenda that will likely kill thousands of jobs.”

SeaWestNews champions British Columbia’s farmed-salmon industry — and attacks the critics of that industry — with the kind of melodramatic fervency more often associated with the sort of right-wing pundits who cast themselves as the thin line between freedom and “cancel-culture” hordes.

“They’re obviously a salmon farm public relations effort,” Morton says on today’s episode of CANADALAND, in which she discusses her decades-long effort to examine the effects of that industry and the lengths to which it’s gone to stop her. Her new book summing up that quest, Not on My Watch: How a Renegade Whale Biologist Took on Governments and Industry to Save Wild Salmon, is out now from Random House Canada.

The most difficult part of her advocacy, she tells CANADALAND host Jesse Brown, has been “measuring the impact [of the salmon-farm industry] and not being able to communicate it properly to government because of media efforts like the SeaWestNews.”

An “about” page not easily found says, “This news site aims to shine a light on British Columbia’s dynamic seafood industry and its impact locally, nationally, and globally.” The site, “aided by a group of veteran journalists, is dedicated to bringing people together for a delicious discourse on sustainable fisheries so you will know that the seafood on your plate has been responsibly harvested.”

For the purpose of soliciting advertisers, they call themselves the “#1 Destination in North America for Aquaculture Industry,” reaching over 100,000 “online users” globally.

The most frequent byline belongs to founding editor Fabian Dawson, who until 2016 was a top editor at Vancouver’s daily tabloid, The Province. These days, he also reports on immigration policy for New Canadian Media, his position there underwritten by the federal government’s Local Journalism Initiative.

He also runs Fabian Dawson Media, which “works to develop specific issue-related and fundraising campaigns and delivers measurable results for organizations like the B.C. Salmon Farmers Association,” among others. Chief among the PR company’s projects is SeaWestNews.

Fabian Dawson Media didn’t respond to questions sent by Canadaland late last week regarding SeaWestNews and whether Dawson counted the Salmon Farmers Association among his clients in March 2018, when he wrote an op-ed for The Province denouncing the “fact-deficit anti-fish farm lobby, much of which is funded by foreign interests.”

On October of that year, Dawson published a series of posts on his Facebook profile warning against the influence of environmental activists and their enablers.

“Every day, Canada’s bounty from the land and sea, is being choked by sinister sources of funding. Money from America flows unabated to Canadian eco-activists and disparate First Nations groups to disrupt everything from sustainable salmon farms to pipelines,” he wrote on October 18, alongside excerpts from ForestEthics’ U.S. tax forms.

That same day, he posted an excerpt from a Black Press column, which proclaimed that “After more than a decade of U.S.-funded attacks targeted exclusively on B.C.’s salmon farm industry, the tide is finally turning. The fake-news tactics of hired protesters have become so obvious that even some news media aren’t biting any more.”

On October 19, he shared a Globe article, “BC NDP’s warning on fish-farm tenures bad for investors, critic says,” adding, “WHY YOU SHOULD BE AFRAID, VERY AFRAID OF THE GREEN-DP in BC.”

A few hours later, the seawestnews.com domain was registered.