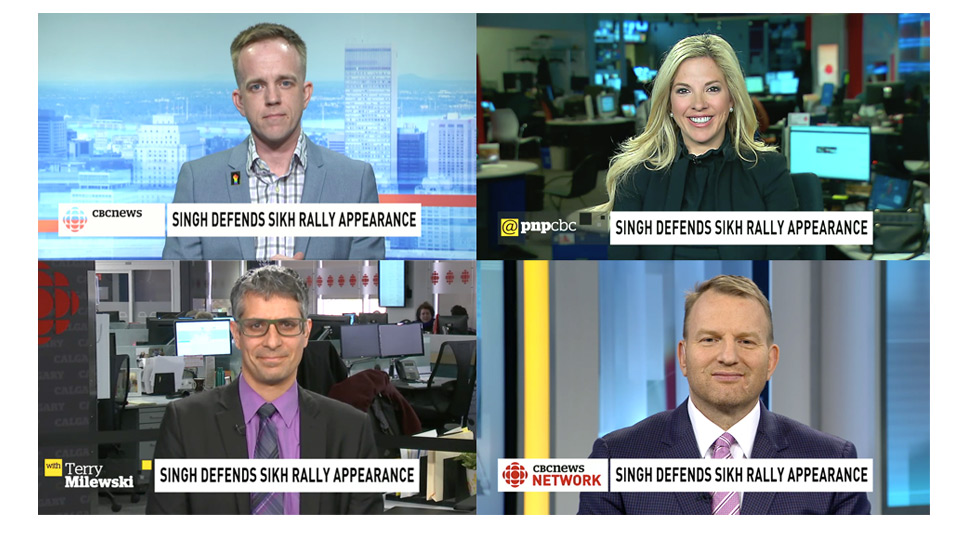 Sikh Perspective Too Often Missing From Canadian Coverage Of Sikhs

Some veteran reporters show outright hostility, as if their 30-year-old notes have finally become topical again, and they can dust them off for one more go.
Opinion By Jaskaran Sandhu
Share

As a Sikh, the past few weeks, during and after Prime Minister Justin Trudeau’s visit to India, have been frustrating.

It is frustrating when a foreign government equates protected freedom of expression — political speech surrounding Sikh self-determination (i.e., Khalistan) or advocacy work raising awareness of human rights abuses and organized violence against minorities in India, such as the 1984 Sikh Genocide — to the rise of “radicalism” and “extremism” in the Sikh Canadian community.

But it is also frustrating when, instead of exercising skepticism regarding these claims (and examining why the Indian government would want to advance this message), Canadian media seems to wholeheartedly jump on an anti-Sikh bandwagon.

Sikhs have very limited representation in the newsrooms of our country, and our diverse voices are rarely sought out for comments or analysis on topics relevant to our community. The cost of this absence is the haphazard, and culturally and historically incompetent, storytelling engaged in by Canadian media.

"The Sikhs were a closed, fanatical bunch, and virtually impossible to penetrate, as Canada's nascent intelligence service learned."

Not sure how that is even remotely acceptable.
https://t.co/l7v52F9Y17

Since February of this year alone, over 150 articles, and counting, have been published by Canadian media that touch on a so-called rise of Sikh “radicalism” and “extremism.” Not so surprisingly, very little comment or input was sought from the community being directly written about. It’s hard to find examples of where else this would be acceptable, and this is a specific illustration of the larger issue of a lack of diversity in newsrooms across the country. Attempts by Sikhs to engage and assist in providing the historical context and nuance that have been missing in recent reporting have been met with disdain.

However, it is the outright hostility shown by some veteran reporters that is most striking, as if their 30-year-old notes on Sikhs have finally become topical again, and they can dust them off for one more go, regardless of the actual relevance to today’s world. When young Sikhs like me, who grew up during and after the 80s, challenge these “experts” on their misrepresentations or lack of context, we are told, as one such journalist stated on Twitter, to “fuck off.”

You're a liar and a champion of theocratic fascists who have murdered untold numbers of innocent Sikhs and Hindus. We're all sick of you. Fuck off. https://t.co/ECSw4BTcvk

It is as if journalists and self-proclaimed Sikh “experts” who pontificate about alleged radicalism in the Sikh community are stuck in a time warp. The one-dimensional story of the Canadian Sikh, with a predictable Ujjal Dosanjh quote sprinkled in, is just too easy and tempting.

The great injustice here is that the average reader is not aware of all the nuances within our story, and takes the written word, radio clip, or video about rising Sikh “extremism” at face value — often at the cost of our community’s hard-earned reputation.

I do not expect Canadians to understand every minute detail, nor the reality that the Sikh community lives through every day. But I do expect our media to do a better job of providing all the layers, and historical and present-day context, to a story about Sikhs.

Newsrooms simply hiring or seeking Sikh voices is not enough, either. What we need is a complete and fundamental shift in how our journalism works. The commitment from newsrooms or organizations must be deeper and more meaningful than just hiring people of colour — it needs to also include an appreciation of the fact that complete and layered storytelling serves an important function in providing audiences a fulfilling and sound picture of what is happening. The alternative is a public with an impoverished understanding of the world around them and what their fellow citizens — and in this case, Sikhs — are experiencing.

Jaskaran Sandhu (@jaysingh_01) is a board member of the World Sikh Organization, as well as the special advisor to the Office of the Mayor of Brampton.