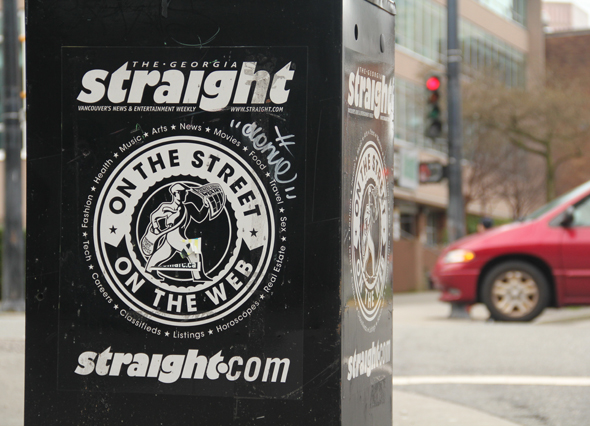 Last week, The Georgia Straight fired Colin Thomas, a theatre critic with a 30-year career. He explained what happened to him in a blog post, which he allowed CANADALAND to republish:

I just got fired from The Georgia Straight. Thirty years. No warning. No compensation.

Last Tuesday, I emailed arts editor Janet Smith telling her what shows I thought I should review. Instead of the usual confirmation from Janet, I received an email from editor Charlie Smith saying that he and Janet would like to meet with me to discuss “some things that are happening here [at the paper].”

As we sat at a table outside the Be Fresh market and café on West 1st Avenue, Janet and Charlie took pains to explain that letting me go was not their decision. The pressure came from unnamed “higher ups.” They had fought the decision to release me, they said, but lost. Charlie was particularly kind about saying how much he appreciates my work as a critic. He also told me that I could be public about anything that was said in that meeting.

“Was there a problem?” I asked. They said the reason I was being let go wasn’t clear to them, but there may have been a confluence of factors.

Charlie pointed out that the paper is experiencing financial challenges and that it was probably easier to get rid of me than a staff person.

Janet said that there’s a lot of pressure on editorial to find fresh ways to do things.

Janet also said that “there have been complaints from some companies.” “What complaints?” I asked. “You know: that you never like anything,” she answered with a laugh. I replied that it’s very hard to do good theatre and that I figure, if one show in three is worth recommending, that’s a good average. Then she added that some unnamed complainants feel that I am sometimes too hard on younger artists. (There is nothing I enjoy more than championing younger artists.) She gave an example. It was one of the worst shows of the year.

Janet said she thought that the door was only closed on reviewing, that I might still be able to write previews or other articles. Charlie said that he would gladly give me a recommendation or connect me with potential employers. I asked if I could have a couple of months before being laid off so that I could have some time to adjust to the loss of income. In the meeting, Charlie said he’d ask. Two days later, in response to an email inquiry, he wrote: “As Janet indicated, the company is not going to purchase reviews.” He confirmed that I would still be welcome to pitch previews and other articles. Writing previews for the Straight has become an increasingly minor part of my job there and is no longer significant in terms of income.

But I’m not going away. I love the theatre and I love writing about it. I’ll be launching a new initiative. Watch for it. Until then, I will continue to post reviews on this blog.

See you at the theatre.

ADDENDUM:
I have received a message from Charlie Smith. He remembers one part of the conversation differently than I do. Here’s what Charlie had to say: “Hi Colin, I believe I was the one who said you were sometimes harsh on younger artists. I know for a fact that I cited the play that you didn’t like. If you can adjust your post to reflect that I said this rather than Janet, I would appreciate it.”

AND FURTHERMORE: If you’d like to stay abreast of what’s happening with the new project, feel free to befriend me on Facebook. Lots of smart people started to do that before it crossed my mind that that might be a good idea.