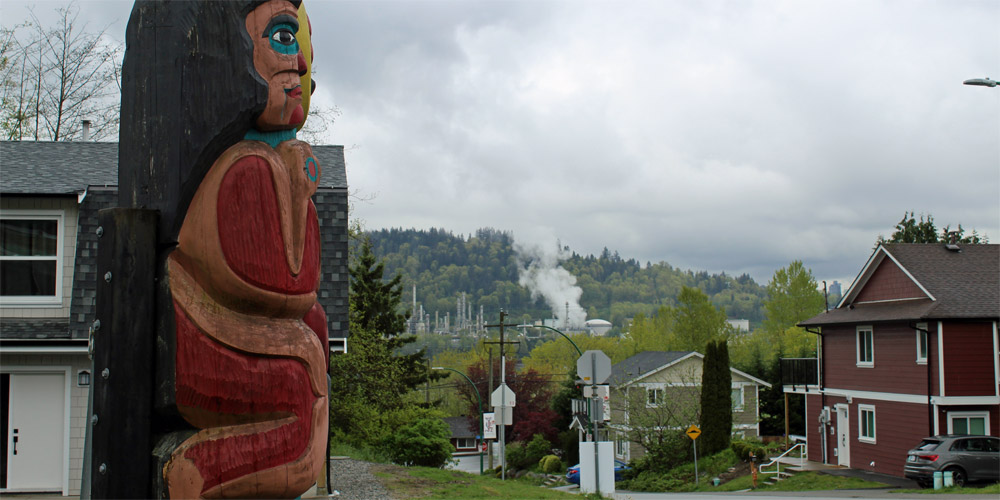 In photos: The pipeline project on the Tsleil-Waututh’s doorstep

The Trans Mountain Expansion threatens an already dwindling orca population, with whose survival the First Nation sees itelf as intertwined
On the Monday show By CANADALAND
Share

On a small tract of land in what is now called North Vancouver, the Tsleil-Waututh — meaning “People of the Inlet” — are on the front lines of an epic battle to protect the Coast Salish Sea.

It’s a fight they wage alongside their ancient comrades, the orcas that hunt in the Burrard Inlet, on the Tsleil-Waututh’s doorstep. These “wolves of the sea” have already become a rare sight, due to the threats they and other marine life have faced over the last two centuries of urban, commercial, and industrial development. The foe they now stare down — the “snake” of an enemy, as the Tsleil-Waututh call it — is the expansion of the Trans Mountain Pipeline, a project that began as a private venture by the Texas-based Kinder Morgan, only to be purchased by the Canadian government in 2018.

The project will triple the pipeline’s capacity from 300,000 to 890,000 barrels of oil each day. But an expanded marine terminal is expected to increase shipping traffic in the inlet by a factor of seven, with about 400 tankers passing through the port annually.

To the Tsleil-Waututh, their survival goes hand in hand with that of the sea wolves: if their whale relatives are wiped out, the same will happen to the tribe. On the other side of the American border, in Washington State, the Lummi Nation is similarly invested.

On this week’s CANADALAND, reporter Brandi Morin travels to unceded Coast Salish territory to explore the deep bond between the Tsleil-Waututh and the orcas, and the impact the pipeline expansion project is set to have on both:

Here is a selection of the photos that Brandi took in the course of her reporting: