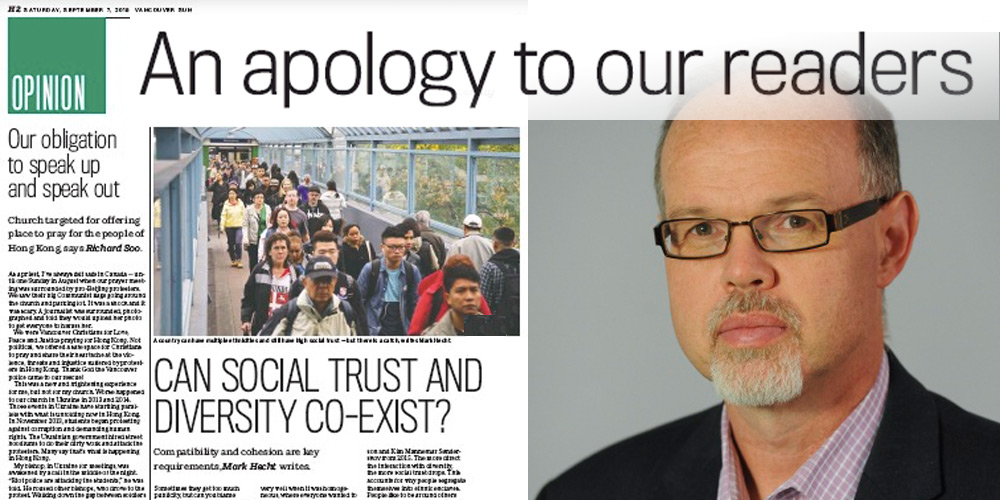 A century ago, Canada was a “White Man’s Country.” It was the era of overt race politics and colonialism. Indigenous peoples and Asian Canadians were barred from voting, and immigration from Asia was legally restricted.

Politicians proudly stumped on keeping the borders sealed from non-white immigration, and newspapers, including the Vancouver Sun, peddled copies by brandishing slurs like “heathens,” “hordes,” and “invaders” in their headlines.

Judging by an opinion piece published by the Sun this past weekend — “Ethnic diversity harms a country’s social trust, economic well-being” — it would seem Vancouver’s largest daily paper is still bent on stoking racial discord a century later, though now in a softer, more academic tone of voice.

And ironically, when it comes to this sensitive issue of fostering social trust, our mainstream media is far more capable of inflicting damage — and on a far greater institutional and city-wide scale — than anything my Filipino neighbours, or the elderly Chinese couple down the street, could ever do.

In the piece, contributor Mark Hecht argued that ethnic diversity is incompatible with building social trust. The Mount Royal University instructor then pulled together and selectively interpreted conclusions from a patchwork of thin scholarship to further conclude that social trust is the best predictor of economic growth. In other words, the more homogenous a country, the more likely its citizens to prosper.

Nobel Prize-winning economist Paul Krugman, for whom productivity is the key determinant of long-term growth, would certainly take issue with that claim. As would countless other economists, who have studied more recognized factors, like access to capital, the rule of law, abundant natural resources, adult literacy, and labour and social mobility. They would also point out the obvious and easily observable flaw in the argument — that several of the world’s leading economies, including the U.S. and Canada, have very diverse populations.

The piece, which was not unlike content typically found on Breitbart and other alt-right websites, even leaned on a report from an anti-Muslim thinktank, the Gatestone Institute, to make the case that Muslims are simply not compatible with Western culture. For Hecht, the solution to building social trust is clear: “excluding certain people from one’s society.”

Hecht added that where ethnic diversity works, such as in Switzerland, which has high levels of social trust, it is because the four major ethno-language groups have self-segregated into their own quadrants. In reality, approximately one quarter of Switzerland’s population was born outside the country, a proportion greater than even multicultural Canada. That cohort includes a significant demographic of (largely lighter-skinned) Muslims from parts of the former Yugoslavia, Albania, and Turkey. A routine fact-check would have unravelled Hecht’s argument that Switzerland is a multicultural utopia thanks to strict ethnic enclaving of its official language populations.

After widespread condemnation, including from numerous reporters in the Sun newsroom, the piece was pulled down from the website. Harold Munro, the editor-in-chief, issued an apology, stating the article “contained views that do not meet the journalistic standards” of the paper, adding that the paper “is committed to promoting and celebrating diversity, tolerance, and inclusion. Our vibrant community and nation are built on these important pillars.”

Over the past century, Canada has transformed into a paragon of pluralism. Across the country, there is relatively broad acceptance of sexual, gender, cultural, and religious diversity.

But based on this piece — and arguably others published by Postmedia outlets — skin colour still seems to be a threat to Canada’s social harmony, or at least is too often framed as such by Canada’s largest media chain. Where the word “diversity” comes up in right-of-centre coverage about immigration, it points to race and ethnicity first and foremost, and rarely to other characteristics like age, language, education, work experience, and so forth.

As an editor, having read the Hecht column, I would have changed a couple of sentences for being needlessly inflammatory and changed the subhead, which in my view overstates that the column actually says.

It doesn’t help the perception of bias that the contributors and writers producing this copy for Postmedia’s shrinking and non-diverse newsrooms tend to be white, older, and lacking the language skills with which to engage the communities they cover. When this “ethnic” reporting doesn’t become predictably repetitive due to a reporter’s limited pool of “community sources,” it can seem foreign and strange to those of us actually from the communities being covered.

Publishing stories that alienate Vancouver’s diverse communities is not a recent phenomenon for outlets like the Sun. It’s long been embedded in the culture. When the paper assigned writers to regularly cover the city’s South Asian and Chinese communities in the 80s and 90s, the reporting was largely focused on negative or crime-related stories. For two decades, the Sun‘s white “ethno-beat” journalists fed the paper’s readers with regular content about the South Asian community that had a tendency to return to the 1985 Air India bombing. With the Chinese community, the stories would emphasize gangs and “monster homes,” the pejorative term for larger multi-generational houses.

The question of diversity and social trust is not a new subject, nor is it a frivolous one. It has been closely studied at academic institutions as reputable as Harvard. It merits a serious examination, and our daily newspapers and other outlets have a critical role in mediating that public discourse.

1. This is what happens when academics cherry pick from a massive body of research to make completely disingenuous arguments. The research on the relationship between social trust and ethnic diversity – at the national and neighbourhood level – is HUGE. Huge. https://t.co/XvoJXOW2by

But even in the recent past, Vancouver Sun opinion pieces about immigration and Canada’s changing demographics have too often veered hard right into fear-mongering about the great white “replacement” or minorities wielding disproportionate political influence.

According to a Canadaland interview with Hecht, he submitted his virulently anti-immigration piece to the Sun based on what he saw as similar writing by one of the paper’s columnists, Douglas Todd. It’s likely the editor(s) in charge of assessing the piece waved it through, as it was provocative, on the spectrum of similar pushback-against-immigration opinions, and likely to generate pageviews for the debt-saddled media chain.

But what was overlooked, and might have remained so had it not been for sharp public backlash, was that the threadbare evidence the writer provided hardly suggested any sincere interest in improving Canada’s immigration policies, or even its social trust. For example, the piece offered no arguments for better supporting the integration of new immigrants or for improving the current immigration points system to favour better educated and therefore potentially more “adaptable” skilled applicants.

It was an argument for racial homogeneity, of making Canada a “white man’s country,” as it was one century ago. And it was published online and in print in one of Canada’s largest daily newspapers, in a country where nearly one in four people identifies as a visible minority.

Though the Vancouver Sun hasn’t revealed how this decision was made, its editor-in-chief did recently circulate an internal staff memo in response to the matter. It outlined impending changes to the paper’s editorial board, including adding more journalists (“voices”), holding meetings more frequently with members of the public, and “more aggressively and proactively” seeking diverse opinions.

Some changes in the Vancouver Sun newsroom after that racist op-ed was published. Editorial board is being reconfigured, senior editors will "recommit to reviewing all submissions to the Op Ed pages." They're also looking to add "diverse opinions." pic.twitter.com/KYHgWawssz

If “post-national” Canada is not to be swamped in a “go back to where you came from” era of rising right-wing extremism, where social media can easily spoon-feed us the panic most likely to keep us up at night, then we need mainstream media companies to proactively guard against publishing alt-right propaganda that undermines our values related to embracing diversity, inclusion, and tolerance.

As the backlash over the past few days has demonstrated, these sort of articles can seriously undermine the credibility of a masthead and the otherwise solid reporting that journalists do on a regular basis.

Postmedia seems to be pivoting to the right, possibly for financial reasons. And there may be profit in targeting that supposedly underserved market. But there is greater profit in an organization-wide recognition that a credible conservative viewpoint must include a boundary separating it from alt-right extremist conspiracy.

Without that, Postmedia and the Sun will fail in their vital role of preserving and building the social trust that Hecht, and others of his ilk, claim to champion.

Jagdeesh Mann is the owner of Sunflower Media and a journalist based in Vancouver. Follow him on Twitter @JagdeeshMann.