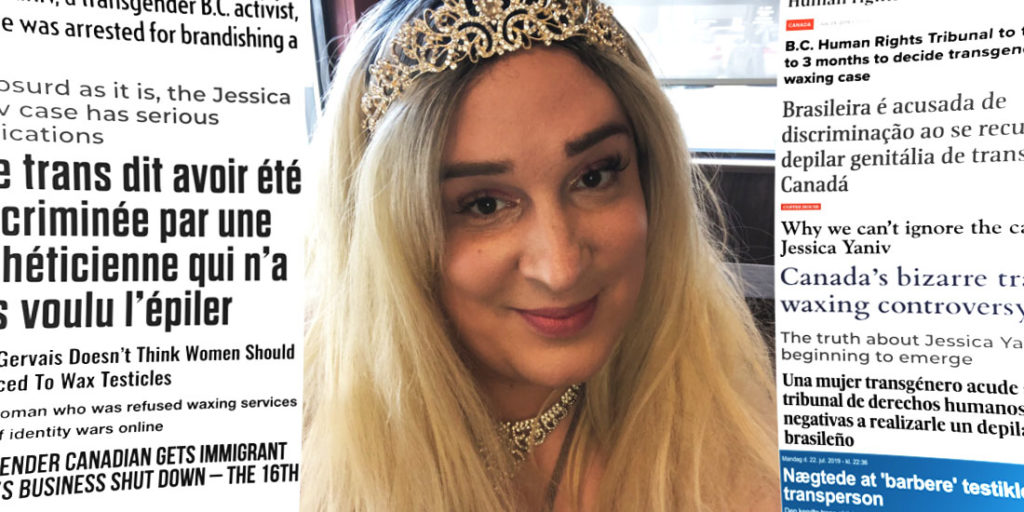 We Need To Talk About Jessica Yaniv

When stories like this break, trans folks aren't given a seat at the table, but we’re left bearing the responsibility of being spokespeople nonetheless.
Opinion By Niko Stratis
Share

It’s important to note from the get-go that I am not the official spokesperson for the transgender community. I speak as a trans person, and as a member of our community, but not for it.

For the uninitiated, I’ll provide context: Yaniv is a transgender person, who is claiming discrimination due to being refused service by several estheticians in British Columbia. The services she was requesting were varied, according to her, but the focus of the current claims and subsequent case with the human rights tribunal is her testicles. Specifically, she wanted a beautician to wax her balls.

This is a delicate subject, to put it lightly. Yaniv is a problematic figure. There are myriad rumours and unsubstantiated allegations against her of things such as pedophilia, menstrual fetishes, and more (which she has denied). She has admitted to making racist remarks. She is a trans person who, at least on Twitter, has nearly 150,000 followers. It’s worth noting that she is not followed by or following anyone I know, which covers a decent amount of ground within the trans community. Taking a closer look, it would appear that this number is likely paid for, and a false representation of her base.

In short, there is reason to believe we’re talking about a bad-faith actor here.

But she still exists, and is a very real person who has managed to force businesses to shut their doors and is currently taking people to the human rights tribunal. And yet, to date, the media outlets covering her story have tended to be far-right-leaning places. It wasn’t until Yaniv had her most recent tribunal hearings that more mainstream media outlets picked up her story at all. By then, the conversation around her was already dominated by sources that are known to be transphobic, or the slightly less-menacing-sounding “gender-critical.” They have warned us enough about people like her, they say, and now she’s been given form. Like Bloody Mary of the transgender set.

This is fuel for a fire that has been raging for some time now: the idea that she is a predator being painted as a victim in order to appease the overly woke left. Following a recent episode of CANADALAND Short Cuts, Twitter was awash with people demanding a denouncement of Yaniv, wondering why those allegations about her were not aired. To portray her as a trans woman that wanted someone to wax her genitalia, was refused service, and then raised herself up as a champion of human rights gives us an incomplete look at who this person is.

When those demands for more were met with relative silence, they were shifted to the trans community. Transphobic individuals have come out of the woodwork to hold her up as an example of everything they warned would happen with our right to self-identification, protected thanks to Bill C-16 in Canada. She is the bad apple — according to the many vocal critics of her and of self-ID and of trans people in general — that spoils the bunch.

I don’t know if the argument is or should be focused on the validity of her transness so much as the nature of her actions.

Many of the allegations against her are, at this stage, unsubstantiated. We don’t know if they’re true or if she’s being used as a weapon against us. The issue is that, whether real or not, it makes us seem like we’re actively obfuscating when we don’t talk about them.

There is an issue with reporting about the trans community. When stories like this break, trans folks are not given a seat at the table to begin with, but we’re left bearing the responsibility of being the spokespeople nonetheless. So often we see stories about trans people written without the context of the community: stories written by cis people about trans people. Someone like Yaniv is acting on her own, regardless of the fact that she paints herself as an activist. She does not speak for the 2SLGBTQ+ community, but that nuance and those details are lost when no one is there to provide them.

We need to do better at providing representation. When we’re talking about issues pertaining to the trans community, to our rights and freedoms, and even to the bad actors within, it’s paramount that trans voices be in that number. There’s no denying the Yaniv case is tricky. When trans voices are not asked to speak about trans issues, it’s easy to misconstrue the situation, or paint with the same broad brush as the trans-exclusionary and -critical right. The current media landscape has need for trans voices, and now’s the time to make the room.

We need to talk about Jessica Yaniv because she has forced us to. We just need the right voices to be heard in the conversation.

Niko Stratis is a transgender person living between Whitehorse, Yukon, and Toronto, Ontario. They work as a consultant on trans issues, and are currently working with the Yukon government to build a website of trans resources for the North. You can find them online @nikostratis.