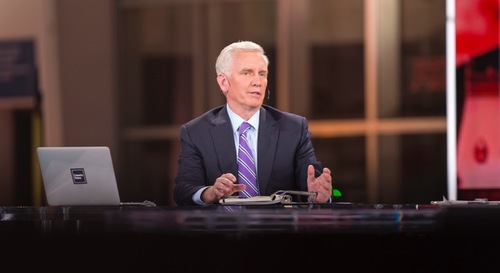 I know the oil industry wants to be thought of as innovative growth entrepreneurs, not out of guesswork, although that wouldn’t be terribly difficult, but because they told me so.
By Laura Bouchard
Share

“Canadians want “pro-growth environmentalism.” They want to tap entrepreneurship, innovation, technology, science, capital and yes, capitalism, to help create ideas that marry our desire to put food on the table, money away for our kids’ education, and some sense of security about how we’re going to live in retirement.”

This last sentence caught my eye. If you read it closely, you’ll notice two lists. First are the feel-goodisms the oil industry likes to drape itself in: innovation, science, entrepreneurship; second are the actual anxieties of average Canadians. Rather artfully Anderson has fused the interests of everyday Canadians with the rhetoric of the oil patch; perfectly aligned and indistinguishable.

I know the oil industry wants to be thought of as innovative growth entrepreneurs, not out of guesswork, although that wouldn’t be terribly difficult, but because they told me so. Or at least CEPA, the Canadian Energy Pipeline Association, did, in a focus group, moderated by Bruce Anderson — a connection he didn’t disclose in his Globe and Mail piece.

CEPA isn’t an actual company but a PR organization. They bill themselves as “the voice” of pipeline companies like Enbridge, TransCanada, and Kinder Morgan Canada. And if you thought, “Wait, isn’t CEPA the Canadian Environmental Protection Act, Canada’s main environmental legislation?” you’re right, it definitely is. Acronym insidiousness apparently the industry standard for this sort of thing.

In 2012, I signed up to be a focus group participant to earn some extra money. I had no idea what it would be about, or that Canada-famous Bruce Anderson would be leading it.

CEPA was testing a few potential narratives. The first was about drawing parallels to the historic infrastructure that built Canada, like the CPR. The second was about Canada being at the forefront of innovation, science, and economic growth. There were poster mock-ups for this message track. The most distasteful, in my opinion, was the one with a pristine futuristic pipeline streamlined across an equally pristine wilderness landscape.

After seeing the ad spots and mock-ups, we were asked for our reactions. The comments were mostly technical and specific: fonts were hard to read, narration had too many words. I sat and waited for the rest of the group (mostly boomers and certainly no one under 35) to contribute their thoughts. I was trying to decide how much of a dick I should be. Eventually I settled on 100%:

“I’m surprised you’d want to portray pristine untouched wilderness next to pipelines in your ads, given the fact that pipelines spill and leak a lot.”

This was followed by a pretty lengthy silence. I had expected a few people to be annoyed or hostile. What I didn’t expect was the exact opposite. If I had to describe the main feeling in the room, it would be “I didn’t know we were allowed to do that.”

From then on, there was a full-on focus group revolt. Suddenly participants were bringing up climate change, and green energy options, and safety; each comment a little bolder than the last. It was as if everyone had been given permission to care about the environment without being dismissed as reckless.

Bruce Anderson has spent his life figuring out how to make the best arguments for promoting oil and gas development (to his credit he has not hidden this fact, unlike some other CBC personalities). Because of this, he knows it’s helpful to dress up an unimaginative backwards industry of strip-mining and explosive drilling as innovative, productive, and forward-leaning. He also knows exactly where to twist the knife — that exploiting Canadians fears’ about economic insecurity is a great way to cow them away from any genuine environmental action they might actually favour.

I suppose my question to Mr. Anderson is this: Has he ever really tried to sell a green sustainable economy? Or any plan that would prevent global temperatures from reaching the point of no return? Clearly there is an appetite on the part of the public to do something. If one not-terribly-well-spoken twenty-something, with a single comment, can completely derail a pipeline focus group into a full-fledged climate change discussion, imagine what the Bruce Andersons of this world could accomplish if they actually tried.