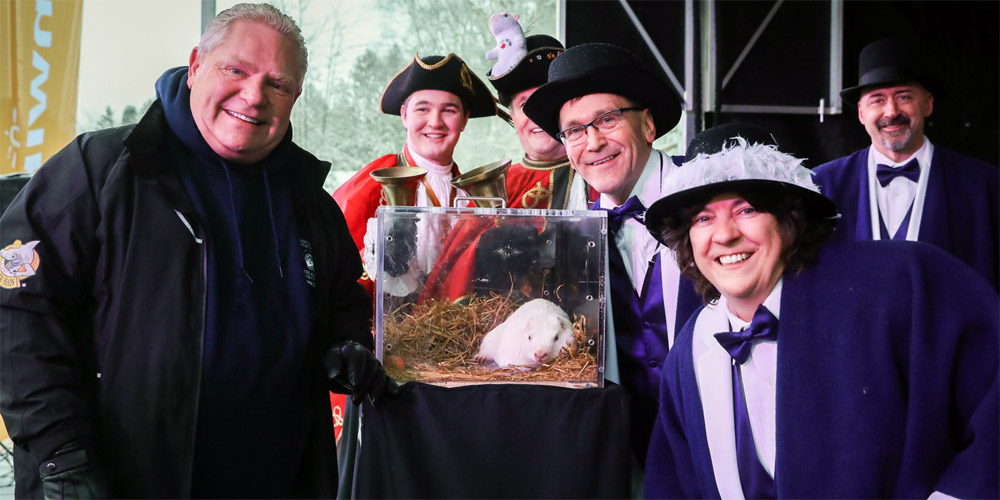 “We were hoping to just quietly find another albino” groundhog

Two months and a day later, she was communing with a mystical marmot.

Wiarton is one of South Bruce Peninsula’s two main population centres, and its best-known resident — perhaps more famous than Wiarton itself — is Willie. On that day in February 2015, the albino groundhog bore encouraging news, which Mayor Jackson enthusiastically communicated: having not seen his shadow, spring would be coming early. (It would, in fact, arrive at the usual time.)

This Willie would speak to the mayor twice more before passing away in September 2017. Following a “big state funeral,” a new albino groundhog assumed the Willie role, delivering three predictions of its own.

But last year, things were different, and not just because of Covid. Groundhog Day festivities moved online, but instead of a livestream, the town issued a three-minute video that bore no trace of a living animal. Instead, in a nod to Wiarton’s first Groundhog Day in 1957, Mayor Jackson grabbed a fluffy hat from a woman’s head, threw it in the air, and upon its landing in the snow proclaimed, “It’s an early spring!”

Despite subsequent prodding by the media, the town refused to confirm whether Willie was alive. The next day, it even issued a news release seemingly mocking the line of inquiry: “Is Willie dead or alive? Would you question the Easter Bunny or Santa Claus?”

Only in November, buried in an advisory about the upcoming 2022 event, did they finally admit that the “albino prognosticator sadly passed away.” But that only raised more questions: When did Willie actually die? How long had the town known? Why was it kept a secret? And how is it that so many Willies over the years have perished under mysterious circumstances?

On this week’s CANADALAND, we dive deep down the rabbit hole, er groundhog burrow, to look at the strange, epic history of Wiarton Willie coverups:

Only after his initial November story about the long-dead Willie went viral was Canadian Press reporter Liam Casey able to get an interview with Mayor Jackson. In a 15-minute exchange Casey described to CANADALAND as “tense,” Jackson wouldn’t say precisely when Willie had died or why the town chose not to disclose the news sooner.

So in reporting this episode, we reached out for our own interview.

What follows is a condensed and edited version of our conversation with Mayor Janice Jackson:

You’re the second most famous resident of Wiarton.

When you first ran for mayor, where did getting to preside over the Willie festivities rank in terms of the things you were looking forward to doing?

It was pretty crazy, because you’re sworn in in December, and then it was only 60 days later that I had to put on the purple suit. I remember the very first time I put that suit on, it took me probably a half an hour to get into it. I’m good at it now. This is my eighth time. And it’s cold, eh. It’s made out of polyester. So I have a million layers underneath. But it’s so much fun. It takes you away from your everyday life of trying to, you know, maneuver a town.

Do they pass down the suit on the municipal council, or do you get them tailored for each new mayor?

We rent them. We don’t own the suits. Because I have a different Shadow Cabinet every year. We have to get them all measured and shipped up here every year.

I saw you were very coordinated, and I was wondering how that worked.

Everybody has to wear the top hat. That’s part of the uniform. But I wear a different feather boa every year.

What do you expect this year’s event will look like, compared to last year’s?

It’s going to look exactly the same as every other year. The only difference is we’re not gonna have a crowd — well, and the entertainment leading up to the prediction and, of course, our fireworks display. So it’s unfortunate, you know. It’s gonna be quiet — quiet and a little bit lonely — but it’ll still be a lot of fun.

Are the fireworks usually the preceding evening, or do you actually do them in the morning?

You had to switch plans last year, and not just because of the pandemic. How did you handle those twin crises?

Last year was a challenge, because we didn’t have a Willie, and albino groundhogs are very hard to find. We had been looking high and low for an albino. We searched across Canada and the United States. But then we got hit with Covid, and everybody was cancelling events. So we thought, “Well, you know what, we’ll take this opportunity and just do a historic reel.” It was our 65th anniversary, to boot. We did a little taped version of how the very first Willie started: Mac McKenzie, the founder of the festival, invited reporters up, telling them, “We got this big festival happening.” And the reporters arrived and said, “Well, you know, where’s Willie?” And he grabbed the fur hat off his wife’s head and threw it in the snow and said, “Hey, it’s an early spring.” So we just kind of reenacted that whole thing. We also used footage from a lot of the previous predictions over the years. But you know, the media, on the day, all they did was show the hat going in the air and me saying “It’s an early spring,” and it confused everybody.

You got a lot of questions about where Willie was. Were you surprised people were that invested?

Yeah, it was like this great big controversy, and we thought, “You know what? That’s fun. We’ll play it up.” You know, “Where’s Willie? Where’s Willie?” It’s such a tongue-in-cheek kind of an event, anyway. And so then you add this little thread of mystery, it just kind of made it even a little more interesting. But then as we approached this year’s Groundhog Day, we still could not come up with an albino. And we were faced with this dilemma, like, what the heck do we do now? So we got a regular brown groundhog. And I let the town know about a month ago that we would be using an unusual understudy this year.

If you had been able to find another albino groundhog, do you think you would have talked about it being a different Willie?

We would’ve just had another albino. We’ve had several of them over the years. I’m not sure how many, because it’s 66 years now. But I would say probably at least 10 — at least 10 — over the years. When they’re in the wild, they only live about four years. But, you know, with us, our oldest was 22 years. He’s living in a house that was designed by the Toronto Zoo. There’s two sections to it: a heated indoor section and a regular outside area for him. And he has his own vet. He’s fed several times a day. He’s our little celebrity, so we pamper him, and they live much, much longer than they would in the wild. We’re really proud of Willie.

He’s the icon of the town. You have the statue that’s also, I guess, a memorial to the past Willies.

We have an old historic train station in Bluewater Park, and it has a lot of old rail memorabilia. But in one section, it’s devoted to Willie, and our Willies are there, along with different memorabilia and pictures and things of that nature of the 66-year history of Willie. So we do have a Willie shrine in Bluewater Park.

How long did the most recent Willie live?

Um, I’m not totally sure how old he was, but we’re thinking about seven or eight. So he wasn’t old, but he certainly lived twice the length of, you know, a groundhog in the wild.

When did he pass?

I can’t tell you exactly when, but it was before the last prediction.

How have you dealt with the transitions in the past?

To my knowledge, we’ve only had two actual funerals for Willie. We had one back in 1999. And I believe that was because Willie died like just a week before prediction morning. And then a few years ago in 2017. With Punxsutawney Phil and Shubenacadie Sam, I wouldn’t be surprised if they had a different groundhog every year — people don’t really notice the difference. But for albinos, because they are rare, and some of them are true albinos with red eyes and others have brown eyes, there is a slight difference between them.

And here’s @frankgunnphoto‘s shot from 1999 of the stuffed imposter groundhog. That is caretaker Sam Brouwer on the left and current MPP @billwalkermpp on the right. pic.twitter.com/eqmEHaO5fZ

When you announced this year’s festival in November, you also confirmed that Willie had passed. Why did you decide to wait until then?

Well, like I said, we were hoping to find an albino. That was our priority. We’d been looking for quite a while, and it got to the point in November where we realized all the groundhogs in Ontario are hibernating now. So there’s no chance for us to get a Willie. And that door closed. And we’re hoping that with the media attention that’s going to happen this year, that hopefully people right across the country will look for us. So if you know anybody out there that’s seen one, we’ll be happy to take it.

Were you concerned about what the reaction might be if you had talked about the most recent Willie’s passing without there having been a successor in place?

Willie means everything to Wiarton, and the Willie brand is growing every year. And really, we were hoping to just quietly find another albino and just kind of make that transition as we have in the past. But it just simply didn’t work out that way. So to not surprise the community and just show up all of a sudden with a brown one, we had to make that announcement. I didn’t want our community to be stunned on the day. But it’s amazing the hoopla that it created.

“Something you don’t want to have frequently, or even every three or four or five years, is a Willie funeral, because then they kind of become meaningless.”

How did you feel about how the story was framed?

I kind of expected a mixed bag. Some people were, you know, “Oh, the mayor’s trying to deceive the people.” And honestly, we’re just trying to protect the Willie brand and wanted to just do what has been done in the past and just make a quiet transition.

When the town checks in on Willie, and it turns out he’s not okay, I imagine it would be like the pope passing away — that someone sends up a plume of smoke or something. Is there a big alert where you get, like, a text message in all caps?

When we lost Willie a couple of years ago [in 2017], the town hall number came up on my phone at 8:00 on a Saturday morning, and my heart sank. They told me that they had gone to feed Willie in the morning and he had died. And that’s when we decided that we owed him a big state funeral, and we did that.

Did you consider having a funeral for the most recent Willie that passed?

That’s something you don’t want to have frequently, or even every three or four or five years, is a Willie funeral, because then they kind of become meaningless. In 2017, we hadn’t had a grand funeral since 1999. So we thought, this is a perfect time to pay tribute to this guy. And he had been with us for quite a while. And so it was just, it was really nice. It was good.