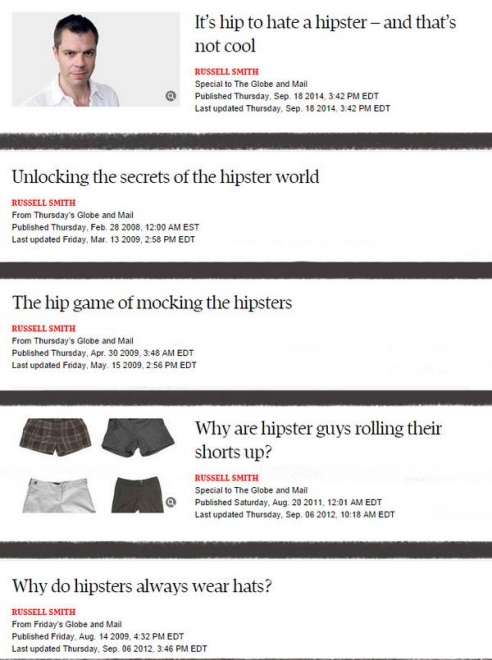 You Know What Russell Smith Should try Writing About? Hipsters.

Nobody calls themself a hipster, but thankfully Russell Smith is around to sort it all out.
News Brief By Ishmael Daro
Share

Searching for “hipster” on the Globe and Mail’s website returns more than 100 results under columnist Russell Smith’s name. These include:

–Are monocles really a hot accessory for hipsters? (2014)

–Why the hipsters have finally turned on writer Dave Eggers (2013)

–Unlocking the secrets of the hipster world (2008)

It’s not just Smith. Hipster scholarship has become a cottage industry among writers of all stripes, but Russell Smith seems to have devoted more time and energy than anyone else to describing, dissecting and disputing the essence of hipsterdom. On Thursday, he filed his latest dispatch from the frontlines of culture in a piece headlined “It’s hip to hate a hipster – and that’s not cool.”

Believe it or not, he has even previously written about “the hip game of mocking the hipsters,” although that piece, from 2009, already recognized the futility of the whole subject since the definition of hipsters is impossible to discern.

Our venerable chronicler of the underclass says he feels an instinctive eye-roll coming on when he sees stereotypical hipsters about town but ultimately concludes that you shouldn’t irrationally hate people for how they look.

“People can wear whatever they want,” writes Smith.

If a column defending hipsters’ sartorial choices strikes you as being at least four years beyond relevance, you’re right. In fact, Smith himself seemed to acknowledge it in 2012, when he wrote another column about hipsters:

I was describing this population to a friend who said, “Have you noticed that no one uses the word ‘hipster’ any more? It sounds so 2010.”

Yes, I had noticed, and that’s why I am careful now in describing these people without resorting to any dismissive shorthand – for one thing, they themselves get so upset.

Smith apparently forgot his lesson about dismissive shorthand when he filed his most recent piece, in which he dwells on “the 1860s miner’s beard and the rolled-up jeans and the horn-rimmed glasses and the plaid shirt and the suspenders” that he associates with hipsters.

The Globe is, of course, quite willing to go back to the same well over and over again, as evidenced by the paper’s obsessive coverage of running. But Russell Smith’s preoccupation with hipsters does not serve any clear audience.

Who is this stuff for?