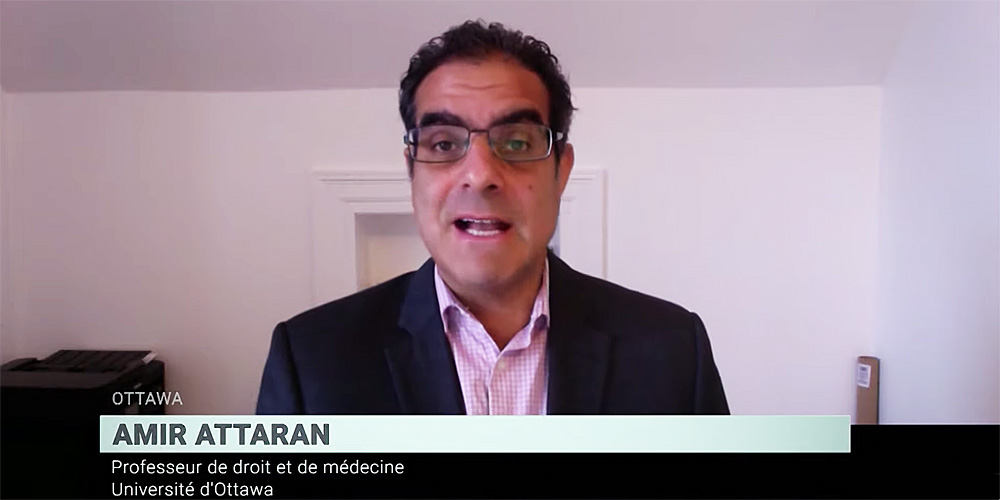 Earlier this year, the prime minister of Canada told Amir Attaran to shut up. The premier of Quebec called his comments “unacceptable.” Another member of Parliament said that maybe he should just go back to where he came from, if he hates Canada so much. The president of the University of Ottawa, where Attaran has tenure, found his remarks to be deplorable and disturbing. He got banned from Twitter.

So who is he, and what has he said to earn such opprobrium? Amir Attaran is a professor of both law and health policy, with a Ph.D. in immunology from Oxford and a law degree from the University of British Columbia.

And, at least as far as CANADALAND host Jesse Brown is concerned, his views tend toward the “radically basic.” Like, that the government screwed up on the vaccine rollout. And that Quebec’s Bill 21 — which just cost a Muslim woman her teaching job because she wears a hijab — is racist.

In stating such things quite bluntly and publicly, Attaran has a way of pissing people off.

He’s the guest on this week’s CANADALAND, where he discusses the duty that comes with privilege, how other tenured academics are little more than “invertebrate cowards,” and why he believes that Canadians too often “aim for mediocrity”:

“I do feel an obligation, as a person who is educated and who has tenure at a university — what a great gift that is — to speak the truth about what I believe,” he says. “And oftentimes, guilty as charged, that’s a negative truth.”

Here’s an edited excerpt from the conversation as it pertains to Quebec’s Bill 21:

When the media was looking for somebody to take a position on the government’s Covid response, it seemed like you were everywhere. Then you took a position on Quebec, and the idea that somebody in the discourse was saying that Quebec was a white-supremacist, racist society for Bill 21 was something that everybody seemed to agree was out of line. Do you think about which of your takes are getting you put on a stage, and which of your takes are getting you pulled by the hook off of the stage?

No, I really don’t think about it that much. Maybe I’m a big dummy and I should think about that more. You know, I’m a brown-skinned kid who experienced discrimination big-time — big-time — when I was growing up. And I don’t have a lot of patience for racists. The legal prohibition on racism exists in both official languages — même en français qu’en anglais. And if Quebec doesn’t like it, I don’t give a shit. Because racism is wrong. And what we are seeing out of Quebec with Bill 21, what we are seeing out of Quebec with the premier saying that there is not such a thing as systemic racism, deserves no succour or respect whatsoever. Even if by saying so, one is thought impolite.

Does Quebec deserve any respect for their own argument, that the Quebecois are victims of prejudice?

Have the people of Quebec, the Francophone people of Quebec, been subject to prejudice in mainstream Canada? Of course they have! No question! But that does not translate into license for state-sponsored racism. And taking it to that extreme, as the current premier has done, is simply primitive. I won’t put up with it.

If Quebec wants my respect, it can have it, in all the ways that it truly is excellent: its excellence in the arts; its attempt, more earnestly than many other parts of Canada‚ at social solidarity. These are tremendously admirable things about Quebec. But the fact that racial minorities are more excluded from the public sector in Quebec, the fact that we have Joyce Echaquan and others literally dying, dying in healthcare — in the setting that’s supposed to keep them alive — because of racist attitudes on the part of healthcare providers, the fact that we have Quebec’s health system advertising openly for “white nurses only”: this is deplorable.

And if that’s not something that you can say within the political discourse as it’s practiced in Canada and its media, you don’t care.

I do care. I think it should be said in the media. I think it should be said without fear or favour. That’s how the media is supposed to function. But of course, there is a great deal of self-censorship among the media in Quebec, and outside Quebec, in discussing issues of race and inclusion. And I think that’s simply wrong. I don’t think history will judge it kindly. So I’m prepared to say what I think is good or bad about Quebec, and if others don’t like it, tant pis, basically.

Screencap from one of Attaran’s many media appearances from early in the pandemic, this one on CPAC, criticizing the federal government’s reluctance to share data.