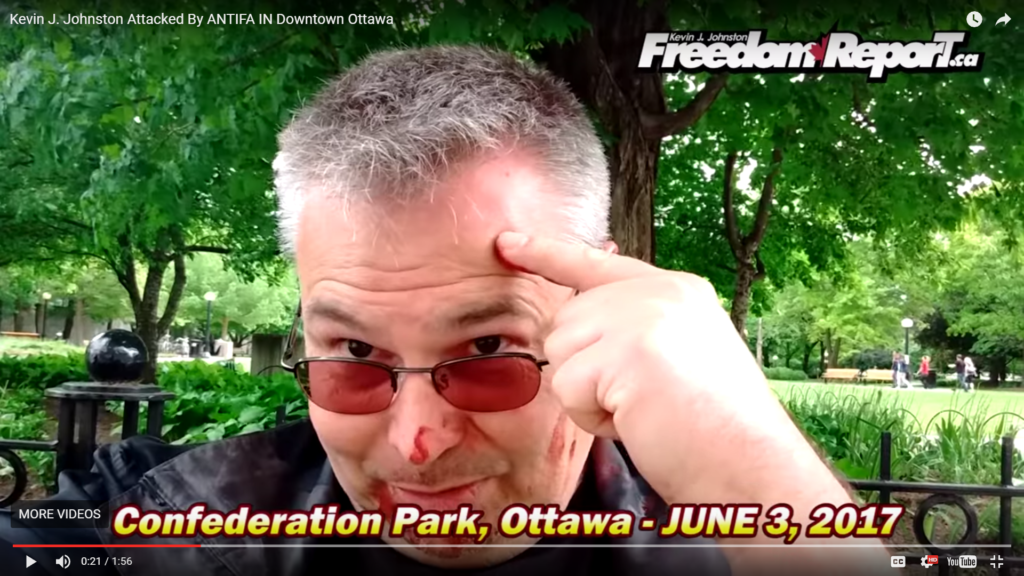 Did protesters assault Freedom Report's Kevin J. Johnston, or did he assault them?
Article By Evan Balgord
Share

An alleged assault covered by the Ottawa Citizen and National Post may not have happened as reported. Kevin J. Johnston, an online media personality of Canada’s anti-Muslim right, claims he and his cameraman were assaulted by ‘Antifa’ members, resulting in the arrests of four individuals who are facing several charges. The incident took place last Saturday, before the “Million Canadian March” on Parliament Hill that was erroneously reported by Breitbart as a rally of 5000 Trump supporters. In reality, a generous estimate of attendees would place the crowd size at 200.

Both the National Post and the Ottawa Police Service treated Johnston’s version of events as credible, despite contradictions in his account. Ottawa Police arrested individuals pointed out by Johnston, despite being told by others present that Johnston initiated the violence by assaulting a young woman. Charges, including assault with a weapon, were laid against individuals identified by Johnston.

Audrey, a demonstrator who witnessed the incident, is critical of how the police handled things. “It’s about who the police listen to and trust, says Audrey. ”So many people told the police [Johnston] assaulted a woman, but Kevin just points at people and they get arrested.”

Kevin J. Johnston publishes anti-Muslim and anti-government videos on his Freedom Report website, and for his 13,500 followers on Twitter. Johnston, who has said Islam isn’t a religion, is offering a bounty of $2500 for anybody who will record Muslim children praying in schools. In one of his videos, he calls MP Iqra Khalid a terrorist and says he would be happy to see her get shot.

According to Blair Crawford, the Ottawa Citizen reporter who covered the incident, protests are common in Ottawa, and the Million Canadian March — which Johnston was associated with — flew under their radar. Crawford responded to a letter to the editor penned by this reporter and is conducting interviews to better understand the context of the anti-Muslim vs. anti-racist rallies for subsequent pieces.

Crawford also received several phone calls critical of the piece. He says he was skeptical of Johnston, given what he’s published in the past, but decided to treat Johnston like any other victim of a crime. He also indicated that he omitted Johnston’s anti-Muslim comments from his reporting. But Crawford did give Johnston a platform for one of his political views — that Justin Trudeau is “a child” and the country is falling apart. No other witnesses to the incident or any of the anti-fascist activists charged were interviewed for the published article.

Johnston originally reported on Twitter that he was the victim of a knife attack. But Sergeant Hrabchak of the Ottawa Police Service tells CANADALAND that there was no knife attack. “We don’t have any information of that,” says Hrabchak. “None whatsoever. We’ve got one victim, and he’s not even being cooperative with us now.”

Witnesses who were getting ready to demonstrate against the Million Canadian March — who are anti-racist and anti-fascist activists, but not members of ‘Antifa’ — tell a different story. They say the altercation in the park all started with a verbal argument between Johnston and members of the group and that it only turned violent when Johnston attacked a young woman.

After first claiming that there was an ‘Antifa’ knife attack, Johnston changed his story, tweeting that there was no knife attack but that knives had been pulled out after his attack and recovered by the police. Multiple witnesses tell CANADALAND that isn’t true. Johnston also claimed his cameraman was hit in the head, causing a concussion.

The Ottawa Police Service arrived shortly after the violence, responding to a 911 call by Johnston in which he told the police that ‘Antifa’ had a gun. The police arrived 10 minutes later. Witnesses say no gun was recovered. In a video he published on Sunday, Johnston tells a different story, saying it was a fake gun. One of the accused is charged with a firearms-related offence.

Several tweets from Friday suggest that Johnston was seeking out violence or confrontation in Ottawa.

Hey antifa now I am in front of the US Embassy if you would like to come down so I can return your mother’s panties to you. pic.twitter.com/gZliU5Wlx6

Confronting ideological opponents — usually Muslims or anti-racist activists — arguing with them, and filming their reactions is the modus operandi for several extreme right-wing Canadian YouTubers, including Johnston.

Johnston says he ran over to Confederation Park because ‘Antifa’ members were harassing women on the corner.

“I stuck the microphone up to the kid,” says Johnston in his retelling of events. “Hey guys, how does it feel to pick on women? Does it make you feel very masculine and manly to scream at ladies on the street?”

“I assume he was just trying to get a response and then edit it,” says one of the pamphleteers. “He’s a provocateur.”

According to both Johnston and the anti-fascists, he followed those individuals into Confederation Park. Witnesses then say he confronted individuals and stuck cameras into their faces, but the violence only started when Johnston punched at the head of a young woman and pulled her to the ground. He then fell to the ground and the group separated the two of them. Johnston was then beaten, suffering a cut to the ear. A few seconds later, he got to his feet and he stayed in the park asking for his camera back, which was allegedly taken during the fight. It was not returned. Witnesses say the woman suffered cuts to her face and was shaken up. She left the park.

“When I called the police, the police arrived,” Johnston says in a video, “. . . I couldn’t believe the amount of fear that these Antifa kids had when I was standing there with uniformed police officers.”

Johnston has announced plans to “doxx” the anti-fascists who were arrested. Doxxing often begins campaigns of harassment, death threats, and worse.

“If I have access to your name and your home address and your parents’ names and your parents’ places of business — I’m posting all of that stuff,” says Johnston. “You’re going to have me at your front doors showing the world where you live and who you are.”

“Even though Antifa are kids,” he says, “they’re no longer human being to me . . . I will defend myself properly from now on in. I’m going to defend myself to be best of my ability. You’re not going to like it. I’m bringing martial artists with me at all times.”

Kevin J. Johnston did not respond to CANADALAND’s requests for comment.