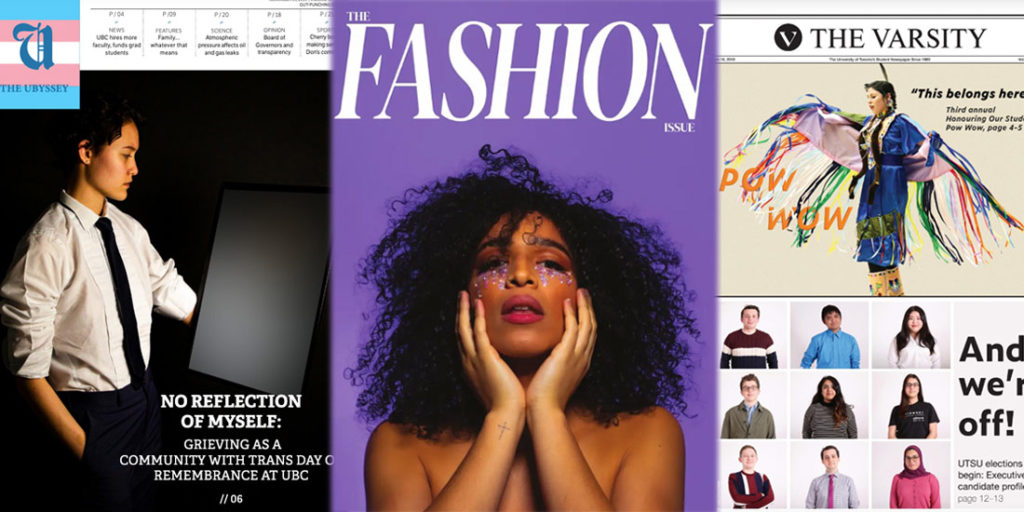 Campus Papers Show What A Diverse Media Landscape Could Look Like

That Canadian media is overwhelmingly white and male is not a new observation, and every so often, a new controversy erupts that focuses attention on this issue for a few weeks before the news cycle moves on.

However, student journalists — an often overlooked segment of media — have long been chipping away at accessibility barriers, and the many women of colour leading student papers across the country this year offer a glimpse into what the future of Canadian journalism could look like.

Beyond just being visible symbols of change, women of colour serving as editors-in-chief at student papers — myself included — are identifying problems within the industry and putting in the work to ensure that both their newsroom demographics and the content they produce can serve as standards for Canadian media as a whole.

For instance, The Manitoban editor Malak Abas, at the University of Manitoba, is establishing an Indigenous Affairs reporter position. Coordinating editor Alex Nguyen at The Ubyssey is founding a Canadian Journalists of Colour chapter at the University of British Columbia. And The Eyeopener editor Sarah Krichel at Toronto’s Ryerson University has focused her tenure on prioritizing mental health for her staff and equitable coverage for her readers.

She wants her paper to produce the type of coverage she wants to see in other publications, meaning that all content should be produced with inclusivity in mind.

But she adds that equitable reporting also comes from who is doing the reporting for you. For instance, people from marginalized backgrounds should be given the opportunity to report on their communities, but they also should not be pigeon-holed into only reporting on those issues.

Josie Kao, Sarah Krichel + Adrianna Michell:
“Feminist media=inclusive of our differences; it’s not having a token writer, a pigeon-holed beat or meeting a quota. It’s doing the work to engage + understand communities by giving them the autonomy to tell their own stories…” pic.twitter.com/bjVVQ9nBhW

By giving contributors from diverse backgrounds the space to write about issues that are important to them, Krichel hopes that they can bring these priorities and values into the rest of their careers, regardless of the outlet.

From her experiences working in mainstream media, Krichel knows firsthand how “severe of an impact” the journalism industry’s whiteness can have on one’s mental health.

Krichel explains that her experience working in white spaces that clearly weren’t made for her ingrained in her the notion that “you are not meant to succeed at this and this isn’t for you.”

She points to how the journalism guest lecturers that she encountered at Ryerson University were always white and old, or how no one cared about the stories she pitched during her internship at the National Post.

Because of this, she works hard to ensure that her newsroom is a place where anyone can feel comfortable.

“I have no doubt that diverse campus newsrooms across Canada are going to, by default, result in more diverse newsrooms countrywide”

The Ubyssey’s Nguyen is also working towards increasing diversity in her newsroom, although she stresses that there needs to be much more nuanced understandings of what that means.

She says that the definition of diversity should include not only gender and race but also, for example, socioeconomic status, sexual orientation, and disability, to name a few. Essentially, identities that are often invisible.

Moreover, once people of diverse backgrounds join the paper, they must be given an opportunity to rise in the ranks.

“We can have a lot of people of diverse backgrounds,” says Nguyen. “But if they are being seen as expendable or bottom-of-the-ranks, without any ability to move up into positions of power… obviously that is still lacking.”

When she was a staff writer, Nguyen worked for a news editor who was a woman of colour, which gave her more confidence when she decided to pursue the position herself.

To her, improving diversity is crucial not only because it improves the quality of her paper’s coverage and work environment, but because Nguyen sees student papers as “a pipeline into mainstream media,” something The Manitoban’s Abas also highlighted.

“I have no doubt in my mind that diverse campus newsrooms across Canada are going to, by default, result in more diverse newsrooms countrywide,” says Abas.

However, she adds that while there is still a lot of work to be done to make mainstream newsrooms more diverse, the same can be said for student papers as well.

“Every newsroom in Canada, even smaller ones like ours, could do better and should have a responsibility to be better.”

“At the end of the day, I know that it’s not going to be the white journalists who are pushing for better overall coverage”

Like Nguyen, Abas recognizes that there are socioeconomic barriers to working at a student paper for very little pay or, in some cases, for no pay at all.

But breaking those barriers to entry is crucial because of how much these papers act as stepping stones into mainstream media. If student journalists gate-keep an already ultra-exclusive industry, then there is very little hope for change.

This philosophy is what guides my work as editor-in-chief of The Varsity. I’m the first woman of colour to be leading the University of Toronto’s student newspaper of record in at least the past two decades, if not in its entire 139-year history, although this “first” is not something that I put a lot of value in myself. It’s not so much about there being a person who looks like me in this role as it is about what I can do to make sure that anyone can see themselves in this job.

To me, the fourth, or fifth, or tenth woman of colour EIC is so much more important than the first. I see my job at The Varsity as laying the groundwork to make it easier for people of all backgrounds to work here in the future, both because it would enrich the breadth of our coverage but also because I want to make sure that there’s a space in the industry for those who come after me.

“It really is up to the people who don’t see themselves [in mainstream newsrooms] to make the difference,” says Krichel. “At the end of the day, I know that it’s not going to be the white journalists who are pushing [for] better overall coverage from a particular publication,” such as through telling stories that have historically been ignored by mainstream media and telling them responsibly.

What Krichel is saying about the work being done by people of colour, as opposed to white journalists, is exactly why this more diverse future for Canadian journalism is a possibility, not a certainty.

Student journalism is currently a refreshing landscape of innovation and inclusion, but it has only gotten to this point through decades of work from marginalized communities, and it can only continue down this path through proper support and recognition from mainstream media. This includes reading and sharing student newspapers’ work, crediting them for stories they break, and giving monetary support when needed. These practices are standard for supporting any journalism but are especially crucial for student media because they are so often not recognized as legitimate sources of journalism.

The upcoming generation of student journalists has a lot to offer the industry, but can only do so if established journalists take them and their ideas seriously. As is evidenced by the initiatives that Krichel, Nguyen, and Abas have brought forward at their papers, this industry can learn a lot from younger journalists on how to genuinely bring in new voices to the fold.

It might be easy to dismiss diversification efforts as tangential to the mission of journalism, but opening up the industry would only serve to improve the quality of content.

As long as student media continues to provide opportunities for diverse stories, Andree Lau, the editor-in-chief of HuffPost Canada, believes that this can only benefit the industry as a whole.

“If you have people from the same background, upbringing, education — then you end up having the same types of stories and the same people being interviewed over and over again. There’s no exploration or curiosity or innovation.”

Speaking from her experience on hiring committees, Lau says that she’s always looking for unique story ideas, and oftentimes these shine through the most from people with “diverse and non-traditional” ways of looking at things.

All of which is to say that the work of student journalists trying to change the industry is of vital importance. When asked what advice she would give to these women of colour leading campus papers, Lau simply says, “It’s worth it.”

“There are some days that are tough, where you feel like you have to explain everything and justify everything — whether it’s a story pitch or an editing decision or standing up for what you believe in. And the more you do that, the more there will be of you.”