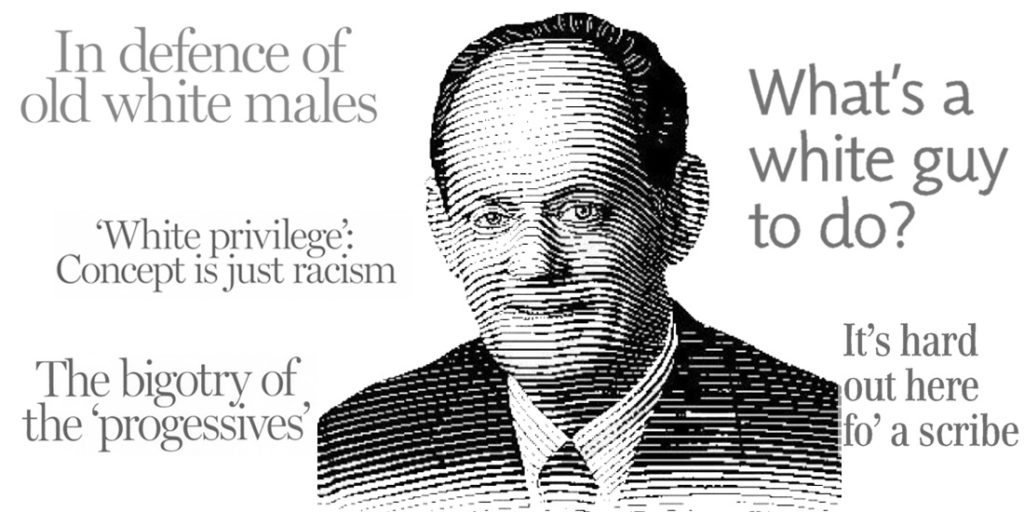 "Where does racism manifest?” asks Rex Murphy, who once wrote that rap music leads to “a degraded and vulgar culture"
News Brief By Jonathan Goldsbie
Share

“Canada is not a racist country, despite what the Liberals say,” trumpeted the headline of Monday’s missive from Rex Murphy, an A-list pundit who has argued that Indigenous people have shown insufficient gratitude to their colonizers.

The National Post columnist had been set off by a tweet from Infrastructure Minister Catherine McKenna, who said, “We need to acknowledge that racism and discrimination are a part of our reality here in Canada and around the world, and we all need to call it out.”

Several Post reporters were in turn set off by Murphy’s column, respectively describing it as “disappointing,” “ignorant,” “horrifying,” and “shoddy.”

One, Vanmala Subramaniam, penned a rebuttal in the paper, explaining that a person with no lived experience of racism, and no curiosity about it, should not be weighing in on the subject. “They most certainly should not be allowed to declare that racism is over,” she wrote, “nor be given a national platform to do so.”

Murphy, who in 2017 denounced the removal of monuments to Confederate soldiers (“past heroes of the American experiment”), found Minister McKenna’s comment to be troubling, because, he said, “It was yet another example of a Liberal leveraging a situation happening somewhere else to create an opportunity to lecture Canadians.”

“In dissecting her statement,” pled the columnist who has repeatedly equated anti-fascists with neo-Nazis, “it would be helpful to have some more details.”

Ah look, the "it's not happening to me and therefore it's not happening" take on racism in Canada. So disappointing, even though I'm zero per cent surprised to see it. pic.twitter.com/WODd1w8qpw

“How much are racism and discrimination actually ‘a part of Canadian reality’?” pondered the former CBC host, who less than two months after a massacre at a Quebec City mosque suggested that Islamophobia is at least partly a rational phenomenon.

“Are they overwhelmingly present? Are they, in McKenna’s view, a central part of Canadian life?” Murphy wondered, a decade after championing Ezra Levant as “the No. 1 advocate for, and defender of, freedom of speech, freedom of the press, and freedom of thought in modern Canada.”

“Where do [racism and discrimination] manifest themselves?” asked the erstwhile oil-industry toastmaster, who has said that rap music contributes to “a degraded and vulgar culture.”

I don't know where to start with this column. It's lazy. It's wrong. It's ignorant. But yeah, like Emily said, it's not surprising. https://t.co/UQ7B9cHXiu

“Are some provinces more racist and discriminatory than others?” he mused, having at one time surmised, based solely on his own impressions, that politicians were 100 times more likely to describe firearms deaths in Toronto as an issue of “gun violence” rather than “gang violence” due to sensitivities.

“If any of the answers to these questions is ‘yes,’ then we have far bigger problems than COVID-19,” stated Canada’s Sam the Eagle manqué, who has previously dismissed white supremacy as little more than “the latest bugbear of the progressive fantasy factory.”

“Another question: is it only those in the higher echelons of the Liberal party who have a clear view of all this racism and discrimination? Indeed, Prime Minister Justin Trudeau has spoken in much the same terms,” observed the Rhodes scholar and Oxford classmate of Bill Clinton, having deemed white privilege a “racist concept on its face.”

I unfortunately had to click on and read this horrifying column in its entirety in order to write an email to my editor expressing my utter disappointment that we decided to run it. There's no point reading it, I assure you. There's nothing to learn here. pic.twitter.com/FBbWNbKctB

With regard to Trudeau’s statement that anti-Black racism is real and exists in Canada, Murphy — who has taken shots at the “the so-called anti-racism movement” for what he’s characterized as its “humourlessness” — astutely observed that “no society is without bigotry.”

“But how big a problem is it here in Canada? That’s the question,” wrote the former author of The Globe and Mail’s “Japes of Wrath” column, who once devoted 870 words to the Oscar-winning song “It’s Hard out Here for a Pimp,” including: “We all know it’s hard to ‘have thangs’ but how many of us, I wonder, knew just how much harder it must be ‘fo’ a pimp.’”

“Most Canadians, the vast majority in fact, are horrified by racism and would never participate in it,” wrote Murphy, whose “Pimp” column continued: “I knew when I heard the song, I thought what a bitch those bitches must be. It is hard fo’ a pimp.”

“We are in fact not a racist country, though to say so may shock some.”

The reporters and editors I work with at the Post hold themselves to a standard that is well above this careless, shoddy column. pic.twitter.com/7VPBGo3BDl

“Do we not have welcoming immigration policies?” the old man, who last year decried a migrant “invasion” threatening the “territorial sovereignty” of the United States, yelled at a cloud.

“Are our largest cities not a great montage of people from every corner of the world, of every colour and creed?” he begged, having once expressed annoyance that “every ‘marginalized’ cluster” in Toronto had its own weekend festival clogging up traffic.

“Do we not, both in private and public, celebrate Canada’s multicultural nature?” he demanded, having earlier explained that multicultural societies are “always both catalyst and agent for the horrific deeds of those from intolerant” ones.

“Do our schools not press the ideas of tolerance and acceptance toward all peoples and all faiths from kindergarten through high school?” Murphy, who has described university courses on social justice as vehicles of “indoctrination and propaganda,” mumbled aloud.

“Is it not a doctrine of Canadian civic life that to end any trace of discrimination or racism is a cardinal rationale for the very existence of modern Canada,” he uttered, having at this point dispensed with question marks, and having once asserted that gender and race are “bankrupt modes of thinking and politics.”

The tenured opinionator, who, years before Trump, referred to Elizabeth Warren as “Fauxcohontas,” continued, “It is therefore strange that after so much honest effort, so many advances in public thought and practice, so great a march from those times past when racism and bigotry were indeed rife and accepted, that an inventory of how far we have come is never taken; that the advances remain unacknowledged or unspoken; and that citizens hear so often from their betters how ‘racist and discriminatory’ they are.”

“To any fair mind,” pronounced the septuagenarian for whom Nelson Mandela’s geopolitics lacked “both the melody and the weight” of Sheryl Crow’s, “Canada is a mature, welcoming, open-minded, and generous country.”

“It would be helpful if these Liberals kept the full story of this country in mind when discussing racism, and not leap so reflexively to grim characterizations of a country that, while not perfect, has been doing its best to be tolerant and welcoming,” he concluded, in advance of next week’s column, in which he will surely hold up the pushback to this one as evidence that Canada is not as tolerant as he thought.

Look at these women! Calling out your employer publicly is a really courageous thing to do in the tiny world of Canadian journalism. 👏🏾👏🏾👏🏾👏🏾👏🏾@vanmalas https://t.co/iUvNJSMFkL

Top image includes print headlines from three of Murphy’s Post columns and two of his old Globe ones.