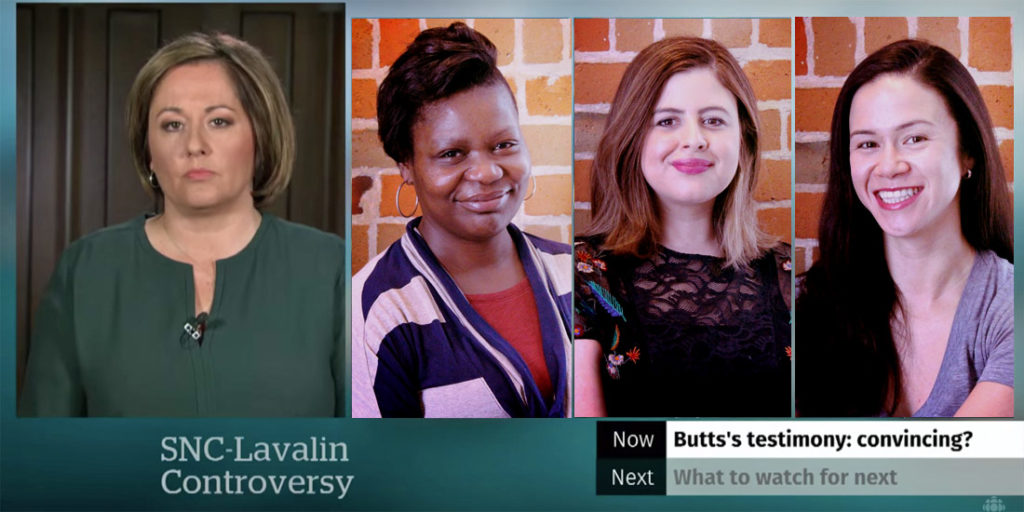 Imagine how different our country would be if newspaper columns and TV panels weren't dominated by former political staffers and lobbyists
Opinion By Erin Gee,Erica Ifill & Amy Kishek
Share

Earlier this month, we started seeing criticism on Twitter about the lack of diverse voices and perspectives on the SNC-Lavalin affair.

To what extent do media project the image of a White Canada? Do white people interrogate how the mirror they see themselves in is totally distorted?

The experiences of cishet white women = not an appropriate litmus test in this situation.

The movement to get more women into politics needs to recognize how starkly different white women’s experiences of political life are from those of Indigenous, Black & other WOC/POC. https://t.co/j3VhmEuM21

Some came from Indigenous women who lamented the lack of column space for their perspectives on an issue that affected Canada’s first Indigenous attorney general.

Written by actual indigenous journalists who are getting paid for their work. That too would be a nice change instead of asking random indigenous (or worse, non-indigenous) people to contribute 'opinions' off the cuff to a staff reporter. https://t.co/X5eg3tD7hg

For example, (and no disrespect to him, who I enjoy reading), do we need 14 columns in 14 days across 3 outlets from an ex-PM’s DComms on the same topic? Meanwhile, none of these outlets have picked up talent like @vmochama and it’s so damn glaring

She even went as far as to identify some women of colour whose perspectives she was interested in hearing — and how by not offering paid opportunities for diverse perspectives, media outlets in this country were effectively showing why they are in continual decline. When we mentioned that two ideas we had pitched had been passed on, Dobson-Hughes elevated our voice and signalled that in turning down active solicitations, media was, indeed, reinforcing a tired ideological bubble.

Also, if you commissioned one of the 14 ex-DComms columns on SNC* and turned down @badandbitchy, please accept your role in the reason your industry needs a bailouthttps://t.co/dpLwbS7e6q

*I like AM and his writing this isn’t about that

And yet we pitched three different ideas to seven different outlets and had only one picked up, by a publication with which we enjoyed a strong existing relationship.

Our approach to discussing the scandal has been through one we know well: being racialized women at work and the power dynamics that exist for us there. Many women don’t necessarily recognize these dynamics, and by giving us a platform, we’re able to raise awareness of the patriarchal systems that structure our day-to-day lives. But more than that, in linking the SNC-Lavalin affair to the workplace, we can show how these issues are systemic and that by allowing an echo chamber of Canadian pundits to say how wonderful Gerry Butts is, we are ignoring the things that not only got him to his privileged position in the first place, but also allow him to be taken as credible despite limited evidence to support his claims.

What has largely been missing from the national discourse regarding the SNC-Lavalin scandal is a discussion of power: power relationships, access to power, and how that power is wielded. We could’ve had a great many discussions about Reconciliation, political party loyalty and how it engages gender and racial power dynamics, and allyship. That sadly hasn’t happened; not because those perspectives aren’t out there, but because the Canadian media complex is a small, incestuous one that prioritizes opinions from those upholding the status quo. We’ve been treated to a parade of op-eds and punditry arguing over the validity of Deferred Prosecution Agreements, the ethics and morality of the current government, and jobs, jobs, jobs — to say nothing of an endless debate over what constitutes “pressure.” Other perspectives have by and large been absent. What makes this all the more concerning is the suggestion in Wilson-Raybould’s testimony that the Liberal government has been all keyed up, whatever the issue of the day, to line up opinion pieces supporting their policy agenda.

Consider how different our public policy outcomes would be if lobbyists, government-relations professionals, and former political staffers did not dominate the newspaper columns or the evening punditry panels.

The perspectives the Canadian mainstream media chooses to project are those from a particular elite class: the political, cultural, media, and business establishments predominantly hailing from Toronto, Ottawa, and/or Montreal. These media outlets seek their consensus while the demographics of society change and technological progress marches on.

The one pitch of ours that did get picked up was published on International Women’s Day and remains among the few pieces that views the SNC-Lavalin situation from the perspective of not only Jody Wilson-Raybould, but also women writ large.

Meanwhile, a recent weekend edition of The Globe and Mail had a two-page spread of columns on the subject, three of which were written by men named David.

With this approach by legacy media, the cost is ultimately borne by society. As we peel back the layers of this scandal’s implications, we uncover truths about ourselves as a country. Yet most analysis of Canadian political culture remains frozen in the past, when society was perceived as more homogenous, where Indigenous peoples were afterthoughts (if thought of at all), when Joe stood in a movie theatre with a screen behind him projecting Canadian cultural cues that no longer apply for a beer that no one drinks anymore. This is the Canada the media still chooses to use as a baseline for reporting — a false image of the Canadian citizen upon which most commentary is built. But context is continually changing, and for a growing number of Canadians, this isn’t a Canada we know; our Canada looks like something else entirely, and it is against this backdrop that political and social analysis must take place.

Canada’s media, in centring the perspectives of a white, mostly male elite, is saying that not only are newsrooms not for people who are from marginalized backgrounds, but neither is the news. How many people can truly identify with Paul Wells’s waxing poetic about the symphony? Why couldn’t political issues be viewed through the lens of pop culture and Cardi B? In continuing to align politics with cultural notes that are typically considered “high-brow,” we are saying that news and politics are just that. And that’s nothing to say of the misguided belief that pop culture is “low-brow” and therefore incapable of being a reflection of our current affairs. The news should be accessible to all. But Canada has only so many Denise Balkissoons to go around.

The future of the media is a media that looks as diverse as the population it’s trying to serve. This whole SNC-Lavalin scandal provided a great opportunity for the Canadian media establishment to show its value — namely why we should fund it directly at the source — and to re-establish itself as a beacon of thoughtful and prescient analysis. Instead, what we got was either the same old hackery, or tepid analysis from those who have seen us through every other scandal this century. Independent media may be an antidote, but is a patchwork quilt of coverage and requires the investment of both time and money. And investing in these perspectives is vital to our collective understanding of ourselves and each other.