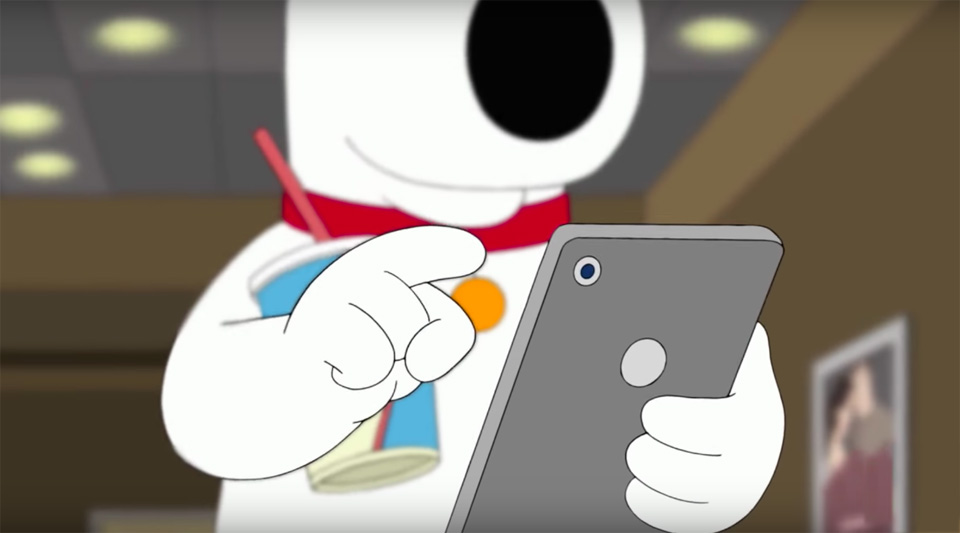 Posts about Conservative Senator Denise Batters appear to have led to the permanent banning of @canadiancynic, the formerly ubiquitous tweeter with the Brian Griffin avatar.
Article By Graeme Gordon
Share

January 18 started off as a regular day on Twitter for Ottawa computer consultant Robert Day. Under his Twitter guise, @canadiancynic, he tweeted out to his over 13,000 followers about his trip to California, the next bottle of gin he planned to drink, and the conservative personalities he loves to loathe.

“Is it my imagination, or does this awkward photo of Ezra praising an actual Nazi no longer exist on Twitter?” he tweeted, referring to an attached picture of U.S. President Donald Trump’s former deputy assistant and now-Rebel Media contributor Sebastian Gorka posing with Rebel founder Ezra Levant. Day has been persistently railing against Levant for years, which culminated with Levant filing a defamation suit against him in 2016 that is still working its way through the courts.

That same day, Day also tweeted out a pair of attacks against another of his favourite targets, Conservative Senator Denise Batters:

NOTE: If I ever get tossed into Twitter jail again, I will simply slither over to my buddy Dr. @caneshaker Dawg’s account and cause trouble from there until it all blows over.

P.S. Sen. @denisebatters is a reprehensible twatwaffle and colostomy bag.

It was these two inflammatory tweets that now appear to have spelled the end of Day’s years on Twitter as @canadiancynic.

At 1:55 p.m., Day was sent an email from Twitter informing him he had been suspended for violating its hateful conduct policy: 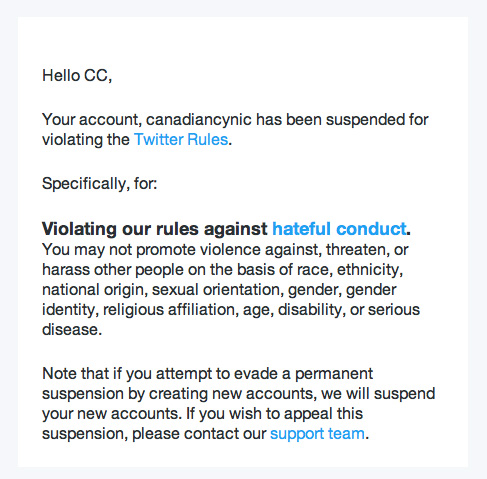 “It’s frightening when you can be banned and no one gives you a reason. And the appeals process appears to be completely ineffective. I tried to call the Twitter support number. It doesn’t take incoming calls. So right now, I basically have no recourse,” Day told me in a phone interview several days later.

When I first contacted him, Day suspected that one of his Twitter nemeses from Alberta had gotten him banned. A couple days later, he came up with a different theory.

“Apparently, a number of people on Twitter are taunting both Twitter and [Senator Batters] with the term ‘twatwaffle’ and are getting temporarily suspended for it, suggesting that Sen. Batters may very well be the person behind all of this,” Day followed up in an email last month.

A few days before, I had reached out to Batters through Twitter direct message, after a friend who knows her mentioned to me that the Saskatchewan senator had reported Day to Twitter on the day he ended up banned. Batters told me she “wanted to keep quiet” instead of talking to the media about Day’s suspension but gave me her office email in case she changed her mind. Questions sent to her office went unreturned.

@denisebatters is my hero today. That is all.

Rempel’s office did not respond to a question about what her tweet was referring to but provided a link to a 2016 National Post report — about a Toronto man who had been convicted of criminal harassment and uttering threats after directing a slew of vicious tweets toward the MP — as “the most serious case” of harassment she has faced online.

“Even though I am a public figure… I didn’t feel that this… (case was) about anything other than me as a private citizen pressing charges against someone who had made threats for me,” Rempel, who represents the riding of Calgary Nose Hill, told the Post at the time.

Rempel’s executive assistant, Julia Parsons, also explained in her email that “Ms. Rempel employs the use of blocking tools on social media, and her policy for the same can be found here,” linking to a flow chart the MP had assembled to help guide her decisions on whether to engage a person on Twitter.

Although Canadian media coverage has often highlighted online abuse directed at centre/left politicians like Prime Minister Justin Trudeau and Environment Minister Catherine McKenna — the latter now routinely ridiculed as “Climate Barbie” after The Rebel gave her the derisive nickname — the social media vitriol heaped on public figures is rife across all parts of the political spectrum.

Asked if anything in particular had prompted his ire toward Batters on the day he was banned, Day offered, “No specific reason, she’s just a raving dingbat.”

Other Twitter accounts that joined Day in taunting Batters with the hashtags “#twatwaffle” and “#WaffleBattered” also faced suspensions. 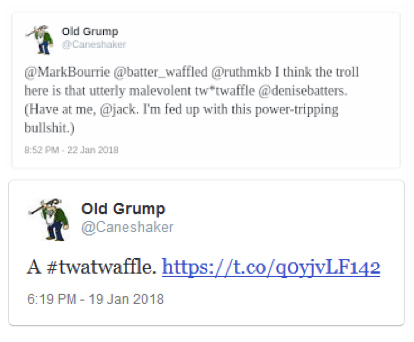 “They weren’t emails, but a notification when I tried to log on. Twitter informed me of a 12-hour suspension for ‘hateful’ content, the count to start from when I deleted the two Tweets,” said Baglow, who also blogs as “Dr. Dawg.” He mentioned several other accounts that were also suspended for varying periods of time as an apparent result of tweets about Batters.

Day’s ban from Twitter wasn’t the first time he had been punished by the social media platform.

“Now, I have been suspended before, there was one time for a week and there was another time for 12 hours, I think. But in both of those cases, they very specifically said, ‘This is the tweet in question, you must delete this before you get reinstated.’”

Although it appears that it was three-strikes-you’re-out in Day’s case, in the past, Day has tweeted vulgar messages about other female Conservative politicians like Rempel and former interim Conservative leader Rona Ambrose without any repercussions from Twitter.

“I’ve called Stephen Harper a cunt. I’ve called Ezra Levant a cunt. Who cares? That’s not covered under [Twitter’s] hateful-policy nonsense,” said Day over the phone. “And if that is the case, they still have the obligation to tell me that’s the basis for the suspension; they still haven’t told me that.”

Since Day’s ban, friends have been demanding his reinstatement using the hashtag #FreeCanadianCynic.

In a 13-part tweet storm last Thursday, Twitter CEO Jack Dorsey signalled that his company is committing itself “to help increase the collective health, openness, and civility of public conversation.”

“Our teams review reports against The Twitter Rules. If it breaks our rules, we can take a number of actions including what you see detailed here: Our range of enforcement options are here for more background,” explains Twitter Canada communications head Cam Gordon (no relation to the author). “These include actioning individual Tweets, DM activity, or accounts.”

Day had been sending appeals to Twitter almost every day to try and get them to give an answer as to why he was banned and to reinstate his account, to no avail. Instead, he said he continues to receive automatic responses.

Asked about the vulgarity of some of his past tweets, Day said it was him “satirizing.”

“There’s nothing hateful there. There’s nothing, as they like to say in their hateful-conduct policy, promoting violence and inciting harm. None of it makes any sense. And then there’s my use of the phrase ‘twatwaffle,’ which some people have taken completely incorrectly, but still, that’s not grounds for suspension. Regardless of any of that, I just don’t know what the basis of the suspension is.”

Day adamantly denies his use of “twatwaffle” was misogynistic or sexist, citing the Wiktionary definition: “(pejorative) a contemptible person.” However, the etymology note in that same entry shows the word was derived from the combining of “twat” and “waffle.”

In recent months, Twitter has been ramping up its crackdown on hateful content on its platform with mixed results, suggesting that its policy is being arbitrarily applied. A Toronto Star piece — “Post Colten Boushie verdict, is Twitter taking sides?” — observed that one Twitter user told another, “Fuck I want to pop you in the lips.” The attacked user was locked out of his account for tweeting a screenshot of the offensive tweet at the RCMP and asking whether or not an Indigenous person threatened by a white person would be helped by the police; the other user went unpunished.

.@TorontoStar columnist @ShreeParadkar didn't explain why "fiery labour activist" @RedIndianGirl got suspended from Twitter. This screenshot may help clear up the mystery. I'm sure Ms. Paradkar would have included it if her editors had given her more spacehttps://t.co/43DM7irGp9 pic.twitter.com/UKqar8MZwj

Marc Weisblott, the author of daily lunchtime Toronto tabloid newsletter Twelve Thirty Six, was recently put in Twitter jail for a minor dig at another user when he quoted a tweet, adding “JBP 911!”

“I was obviously just laughing at the [Jordan B. Peterson] Derangement Syndrome,” says Weisblott via Twitter DM.

He believes that after The Rebel’s Levant retweeted his sarcastic tweet, and Levant’s followers attacked the other user, someone reported his tweet as abusive, leading to the 12-hour suspension.

“The Twitter jail is intense! You get a countdown with instructions on what you have to do to comply.”

Fresh off a spicy twitter ban. Good to be back. ???

“There are hundreds of millions of Tweets sent every day, and we use both reports and our technology to help enforce the Twitter Rules. Given the scale we’re working at and erring on the side of protecting people’s voices, context is crucial when we review content, and we take a variety of signals into account to help us make the most informed decisions possible,” says Gordon.

Both Day and Baglow point out certain right-wing users still active on Twitter as examples of the social media platform being inconsistent in enforcing its policies.

Day also mentioned that he sees Twitter allowing “hate-mongers” Mike Cernovich, Pamela Geller, and Gavin McInnes to remain on the platform as an example of the company having a double standard.

A couple of weeks ago, Day created a new account. Within a few days, his Twitter adversaries had reported him, and he was banned again. 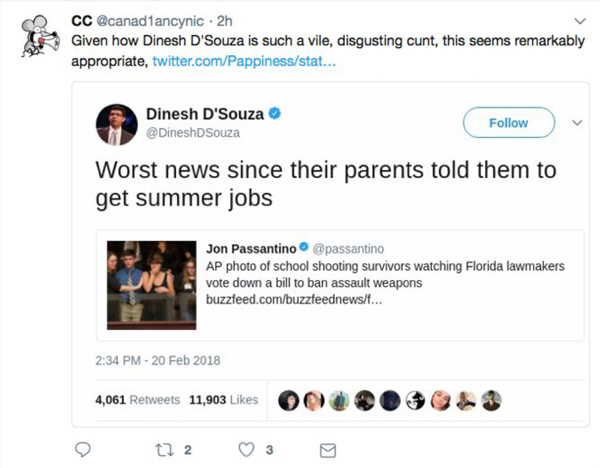