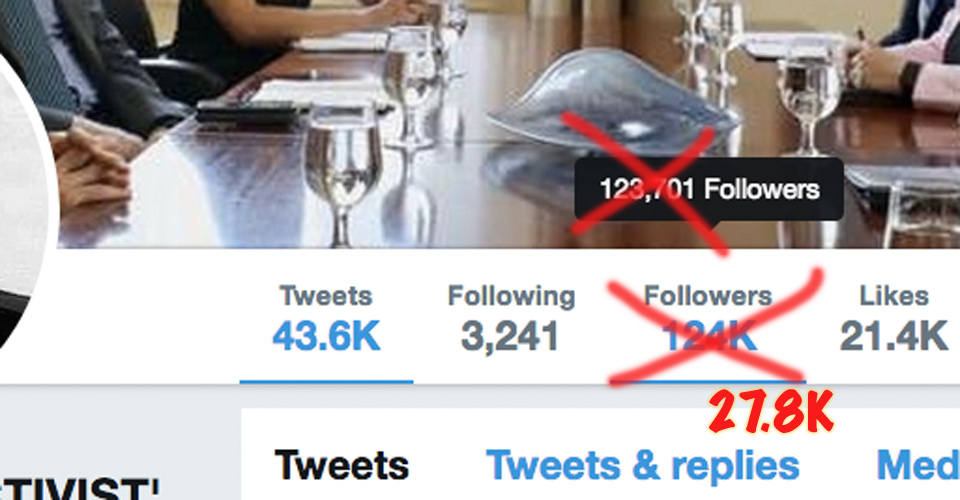 Big accounts tend to accrue fake followers no matter what. But there are also services that sell them.
News Brief By Graeme Gordon
Share

Several high-profile Canadian Twitter accounts lost from a few hundred to a few hundred thousand followers on Thursday afternoon, after Twitter began a site-wide purge of fake and/or dormant accounts.

Dear @twitter – F U! I had a lot of followers who just sit back and enjoy reading tweets; they don't follow many & they don't tweet themselves. You just determined they were not worthy. Ageism? Oh yes. #shameonyou

Federal NDP leader Jagmeet Singh lost 14,991 followers, nearly 10 per cent of the 142,000 he had had. Federal Green Party leader Elizabeth May lost over 3,000, a little more than 1 per cent, of her 308,000 followers. (Prime Minister Justin Trudeau lost less than 1 per cent, and Conservative leader Andrew Scheer doesn’t appear to have been affected.)

The timekilling on TVO got amazing. Toqued Doug Ford supporter Bobby Armstrong cackling as he offers @spaikin $45 on the spot for a copy of his book. pic.twitter.com/F06UbwtDhV

But by far the largest drop thus far noticed in the Canadian Twittersphere was Toronto-based filmmaker and former energy-drink entrepreneur Frank D’Angelo, who lost 365,248 of his 566,800 followers nearly instantly.

CANADALAND tracked changes both manually and via Social Blade.

On Wednesday, Twitter announced it was going to take action against fake accounts that have been locked for suspicious activity. The owners of the locked accounts did not respond to requests to change their passwords, suggesting they were dormant and could be deactivated. Although they were not in use, these accounts still counted as followers until Twitter decided to dispose of them on Thursday.

The Washington Post reported earlier this month that Twitter — under pressure from the American congress over Russian interference in the 2016 U.S. election — suspended 70 million accounts in May and June, and is still suspending upwards of over a million per day.

“For this announcement, all the locked accounts will be removed this week,” says Twitter Canada’s head of communications, Cameron Gordon (no relation to author), in an email about this week’s purge. “Many accounts have been removed already, with the remainder by end of this week.”

At the beginning of the year, a New York Times exposé — “The Follower Factory” — revealed that the Twitter accounts of sports stars, musicians, politicians, journalists, comedians, socialites, and celebrities had many fake followers purchased from shadowy businesses that sell fraudulent social media engagement and followers/friends. (Popular Twitter accounts also tend to inadvertently attract high numbers of fake followers organically.) Some experts estimate that half of all registered Twitter users are fake/bot accounts.

Twitter responded to the NYT story by purging over a million fake accounts.

I followed up on the Times’ expose on my website Raving Canuck in April, looking at the fake follower problem on Twitter from a Canadian angle. The Times reporters involved declined to share information on any Canadians among the more than 200,000 clients who, through business records, they found had bought fraudulent social media engagement from one of a handful of companies that offer such services.

Social media platforms like Twitter and Facebook receive pressure from stockholders to continuously grow their active user base. The latest news about Twitter purging dormant accounts led the stock to plummet as much as 9.8 per cent, only recovering once investors realized the purge was relatively minor and wouldn’t affect the active-user total for the platform. However, investors’ expectations for publicly traded social media companies have led some critics to claim that Twitter and Facebook aren’t forthright about the real extent of the problem of fake accounts on their platforms.

Using Twitter Audit, a website that deploys a complex algorithm relying on probability to estimate the percentage of fake followers that a Twitter account has, I audited dozens of high-profile accounts, finding that many appear to have high percentages of fake followers.

For instance, Twitter Audit results suggested followers of the aforementioned “Political Activist” account, run by staunch Ford supporter Bobby Armstrong, were only 33 per cent real. After Thursday’s purge, Armstrong’s account was left with just 22.5 per cent of its followers. In this case, the Twitter Audit seems to have underestimated his proportion of fake followers.

“I’ll be honest, I overdid it. I’ll be the first one to admit it. A lot of people add five thousand so they can look a little bigger, a bit more attractive,” Armstrong told me in a phone interview when I first did the audits back in April. “It’s like putting yourself on steroids. If you look big, people will follow you… Then you build yourself up, that’s the whole purpose of it.”

Salman, as Canada’s most followed Political Activist I know the area and I do know it well. That’s @Kathleen_Wynne country but you know something if @fordnation pulled up in his bus I think that could change in about 5 seconds. #FordNation I will ask him to do it!

However, many other Twitter Audits I conducted suggested other Canadian accounts had high fake follower counts, too — but many lost only a tiny fraction of their overall followers on Thursday. For a couple of examples, former premier Kathleen Wynne and The National co-anchor Rosemary Barton had Twitter Audits suggesting that 51 and 40 per cent of their followers were fake, respectively.

Yet Barton and Wynne each lost only about 0.4 per cent of their followers.

If Twitter Audit is at all effective in flagging fake accounts, and high-profile users like Barton and Wynne indeed have high percentages of fake followers, it means that the latest Twitter purge barely put a dent in eliminating the millions upon millions of fake accounts still polluting the Twitter ecosystem.